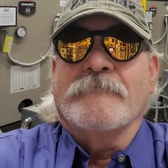 Was born in Hawaii while my Dad was station there, then raised in Ca. enlisted in the Navy in 1971. got out in 75 then went to college after college no jobs so I reelisted in 81 and retired in 97. used my training from the service to work in the HVAC trades.

Deployed to the American Embassies in Beirut and Moscow for 6 months, then for 2 yrs at the embassy in Belgrade
Oct 1981 - Feb 1984
McMurdo Station