You might be hard-pressed to believe it if you look out your window while driving back roads in the South, it's a fact that the Confederate Army lost the Civil War.

Schools, lakes, roads, creeks, bridges and towns are all named after the South's military leaders. That's understandable: Many of them were local boys and had ties to their communities.


What may surprise you is that 10 high-profile U.S. Army facilities were named after Confederate military leaders, and those names were chosen for bases opened during World War I or World War II. All of the men honored were long dead and, while a few Civil War veterans might still have been around 50 years after, virtually all of the men who served under them were gone.

All 10 bases are located in former Confederate states. Why did the Army name facilities after men who served a vanquished foe?

A movement in the late 19th and early 20th centuries known as "The Lost Cause" sought to defend the motivations of the Confederacy, obscure the role of slavery and drape these men in romance and devotion to homeland. After the movie "Gone With the Wind" in 1939, that romance was in full flower as World War II began.

As we consider the implications of recognizing historical figures by naming military bases after them, maybe it's time we really look at what these men said and did before, during and after the Civil War.

1. Fort Benning (Georgia)
Brig. Gen. Henry Benning was a Georgia native who led troops at the Second Battle of Bull Run, the Battle of Antietam and the Battle of Gettysburg. He practiced law in Columbus, Georgia, after the war, and the Army honored him when it opened Camp Benning, now Fort Benning, in 1918.

At the 1861 secession convention, Benning offered his thoughts on why he believed the South should secede. Here's what he said:

"What was the reason that induced Georgia to take the step of secession? This reason may be summed up in one single proposition. It was a conviction, a deep conviction on the part of Georgia, that a separation from the North was the only thing that could prevent the abolition of her slavery. … If things are allowed to go on as they are, it is certain that slavery is to be abolished. By the time the North shall have attained the power, the black race will be in a large majority, and then we will have black governors, black legislatures, black juries, black everything. Is it to be supposed that the white race will stand for that?"

2. Fort Bragg (North Carolina)
Gen. Braxton Bragg was a North Carolina native who graduated from West Point and served in the U.S. Army until 1856. He was not popular with the Confederate troops and ended the war as a military adviser to Confederate President Jefferson Davis. Military historians give him very low marks for tactics and leadership. Fort Bragg also opened in 1918.

Bragg was notoriously ornery, and his short temper led U.S. Grant, who served with him in Mexico in the U.S. Army, to describe him as "naturally disputatious."

Historians generally rate Bragg as one of the worst tacticians on either side during the war, and his losses were major contributors to the Confederate States of America's (CSA) defeat.

3. Fort Hood (Texas)
Gen. John Bell Hood was a Kentucky native and a West Point graduate who switched sides from the U.S. Army at the beginning of the war. He lost a leg at the Battle of Chickamauga and was relieved of command after his defeat at the Battle of Nashville. Fort Hood was opened in 1942.

Hood was a career military man and didn't personally own slaves, but he freely admitted slavery's role in the conflict. "Regardless of all other causes of difference," he said in a speech after the war, "slavery ... was the secret motor, the mainspring of the war."

4. Fort Lee (Virginia)
Gen. Robert E. Lee was a Virginia native, West Point graduate and the most revered military mind in the CSA. Fort Lee is the Army's logistics hub and was opened in 1917.

Historians generally agree that Lee was less enthusiastic about the cause than many of his fellow Southerners, but he did take command of the CSA's army. After the defeat, he was notably opposed to the idea of Confederate monuments, writing in 1869 that it was better "not to keep open the sores of war but to follow the examples of those nations who endeavored to obliterate the marks of civil strife."

5. Fort Polk (Louisiana)
Lt. Gen. Leonidas Polk was a North Carolina native who also served as an Episcopal bishop in Louisiana. He was a second cousin of President James Polk.

Polk had no previous military experience before the war and was killed in action during the Battle of Atlanta. Camp Polk was opened in 1941, and Fort Polk is now home to the Army's Joint Readiness Training Center.

Bragg's supporters are quick to point out that Polk was a far worse leader than his commanding officer and that many of Bragg's defeats can be blamed on Polk's incompetence. Polk was a slave owner before the war.

6. Fort Gordon (Georgia)
Lt. Gen. John Brown Gordon was a Georgia native who had zero military experience before the war. He became one of Robert E. Lee's most trusted generals over the course of the war. Camp Gordon was opened in 1941 and was promoted to Fort Gordon in 1956. The facility is home to the U.S. Army Signal Corps and Cyber Corps.

In 1904, Gordon published a memoir called "Reminiscences of the Civil War" and, at first, admits the true spark that ignited the war.

"Slavery was undoubtedly the immediate fomenting cause of the woful American conflict," he writes. "It was the great political factor around which the passions of the sections had long been gathered -- the tallest pine in the political forest around whose top the fiercest lightnings were to blaze and whose trunk was destined to be shivered in the earthquake shocks of war."

He then goes on to argue that slavery died out in the Union states because of climactic and economic reasons and not because Northerners opposed slavery, per se. He also suggests that Yankee soldiers didn't oppose slavery and were only fighting to preserve the Union.

7. Fort Pickett (Virginia)
Maj. Gen. George Pickett was a Virginia native who graduated last in his class at West Point. He served in the U.S. Army but switched sides at the start of the Civil War. He led Pickett's Charge on the last day of the Battle of Gettysburg and fled to Canada at the end of the war. Fort Pickett is a Virginia Army National Guard installation that was first opened in 1941.

After Pickett's death in 1875, his widow, LaSalle, spent the rest of her life promoting her husband's role in the war by lecturing and publishing three books on his career. She was a leader in the "Lost Cause" movement that romanticized the Confederate army and worked to obscure slavery's role in the conflict.

8. Fort A.P. Hill (Virginia)
Lt. Gen. A.P. Hill was a Virginia native and West Point graduate who joined the Confederate Army at the start of the war. Hill was promoted to lieutenant general after his mentor Stonewall Jackson was killed at the Battle of Chancellorsville.

Hill was later killed in action at the Third Battle of Petersburg. Fort A.P. Hill is a training center opened in 1941.

9. Fort Rucker (Alabama)
Col. Edmund Rucker was a Tennessee native and the only Confederate below the rank of general officer with an Army facility named after him.

Rucker, who lost his left arm in the war, became far better known afterward as an Alabama industrialist who helped build the state's substantial coal and steel industries.

Fort Rucker was opened in 1942 and serves as the primary training base for Army aviation.

10. Camp Beauregard (Louisiana)
Gen. Pierre Gustave Toutant Beauregard was a Louisiana native and West Point graduate. He became superintendent at West Point in 1861 but resigned to join the Confederate Army.

Beauregard and his commanding officer, Gen. Joseph Johnston, were the military leaders who convinced President Jefferson Davis that the war was lost.

Camp Beauregard was opened in 1917 and today serves as a training facility for the Louisiana National Guard.

In the early days after the war, Beauregard displayed the same antipathy toward freed slaves that most of his fellow Confederate leaders embraced for their entire lives, but he'd had a change of heart by 1873.

At a meeting between white and black leaders in Louisiana, Beauregard made a rousing speech in support of racial cooperation.

'I am persuaded that the natural relation between the white and colored people is that of friendship. I am persuaded that their interests are identical; that their destinies in this state, where the two races are equally divided are linked together, and that there is no prosperity in Louisiana that must not be the result of their cooperation," he said. "I am equally convinced that the evils anticipated by some men from the practical enforcement of equal rights are mostly imaginary, and that the relation of the races in the exercise of these rights will speedily adjust themselves to the satisfaction of all.'" 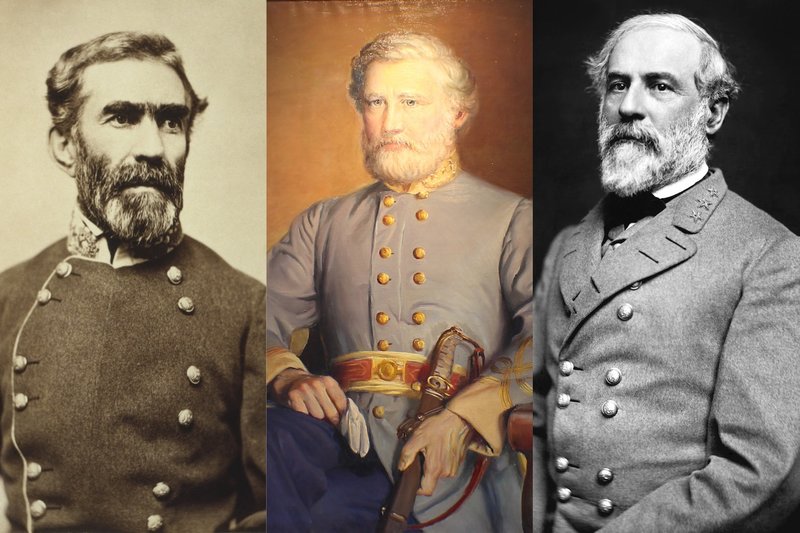 LTC Eugene Chu
Posted 1 y ago
Very good post. While we have military bases named after Confederate generals, they are a veiled insult to the CSA. The generals in the article are among the worst and incompetent of the south.
(6)
Comment
(0)

When we have a Ft. Cleburne or a Ft. Longstreet or a Ft. Breckinridge...then it’s time to raise some eyebrows.
(0)
Reply
(0)

SGT Jinger Jarrett
3 mo
Robert E. Lee was a war hero. He had 32 years of honorable service. You'll have to dig up Arlington to get rid of him.

I believe they study his tactics at Westpoint, or at least they did.

The Union certainly had its fair share of incompetents as well starting with McCllrellan.
(0)
Reply
(0)