I am on temporary active duty in Washington State. I am watching local news and speaking to a Seattle PD Officer almost daily. This Officer is also a Civil Affairs Officer.

The Seattle city council is a bunch of leftist goons. One let the mob in the city hall just before CHOP was formed. Leftists and the science of Stupid! The Mayor of Seattle and the Governor are in denial. They claim the crowds are mostly peaceful. The media and the Democrats use orwellian terms to avoid the truth.

An orwellian 'mostly peaceful' mob set fire to a Starbucks (with units of apartments above) that supports black lives matter.

The head of the Congressional Judiciary Committee Jerry Nadler in DC Capitol Hill has stated the carnage in Portland this is the false 'right wing conspiracy' being reported in DC. He does not believe Portland, Oregon is having a riot nightly.

Since much of the news media is not reporting the truth, you may want to put komonews.com as a source of news for what's really happening in Seattle.

The people's Republic of Seattle have been dealt a blow because a federal judge has allowed police to use less than lethal weapons against the so called 'mostly peaceful' rioters. I read a story on a news feed that the United Nations is telling us to back down on law enforcement in Portland. If this United Nations resolution this true, It's funny that many of these countries that are complaining would use live ball ammunition or armor piercing ammunition on their own citizens. Those 2nd and 3rd world Police States would use real storm troopers and real Gestapo tactics. I believe the Democrats and the media are complicit on letting this anarchy continue. They pretend to say they are for George Floyd.

It looks like most of the perpetrators of the crimes are white people. There is no more neutral news coverage. Once upon a time, the news would report both sides. Now its just one-sided.

The Media and the rioters have the same message. No good cops and no bad protesters!


In my opinion, it is done on purpose to scare the people to vote for Joe Biden and the left puppetmasters. 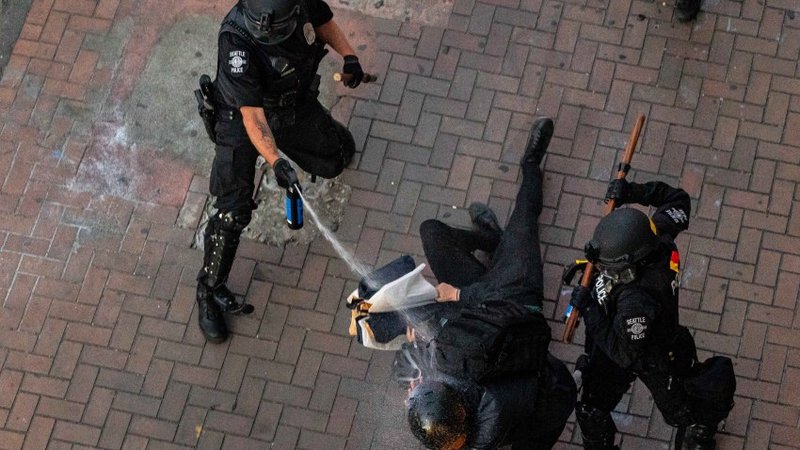 CSM Darieus ZaGara
Posted >1 y ago
It is a sad state of affairs that our country must open their eyes to. This country is on the verge of something horrible, I don’t like to speculate, it isn’t good. Stay safe in your tour Sir.
(11)
Comment
(0)

SPC Erich Guenther
Edited >1 y ago
Posted >1 y ago
The Starbucks they set fire to had residential apartments above it with people living in them, it was not a one story building. That alone should have landed the arsonists significant prison terms but so far I have not heard of any criminal charges yet. Just more examples of the Democratic Party pushing a mass amount of voters to Trump. As unpopular as Trump is, and the political polls being so distorted there is a real possibility of a Trump electoral landslide. Can't wait to see that happen and the reaction to it. Could be either the shock the Democrats need to return more to the mainstream OR it could make matters worse. Either way, Trump has his second term now.

BTW, most of these issues in Portland and Seattle trace their origins to the strong Anarchist movements there and there were WTO riots in at least one of the cities that was pretty severe under Obama or Clinton, so the violent issues there have been long simmering and have almost zero to do with either BLM, Mr. Floyd or current POTUS or Federal Troops. You can Google.
(11)
Comment
(0)
show previous comments

LTC (Join to see)
>1 y
SPC Erich Guenther - Yo no soy brainwashed! Yo tengo un mente. I have free will! I have a mind. That is why I am telling you what I see. 3 local networks here in Seattle are all reporting similar realities of siege in Seattle and Portland. SSG Stephen Rogerson Lt Col Charlie Brown SP5 Mark Kuzinski SPC Douglas Bolton PO3 Bob McCord SGT Gregory Lawritson Lt Col John (Jack) Christensen LTC David Brown
(1)
Reply
(0)

SPC Michael Duricko, Ph.D
>1 y
SPC Randy Zimmerman I hope and pray you are right on for the sake of all of us!
(0)
Reply
(0)

Lt Col Charlie Brown
Posted >1 y ago
I think you've stated it well. It is time for the federal agents to load guns with indelible ink paintballs and shoot anyone who is destroying property. This way they are marked for arrest.
(7)
Comment
(0)
Show More Comments
Read This Next
RallyPoint Home