NCO JOURNAL STAFF REPORT It’s a victory for the feet. Effective today, Soldiers can wear black socks instead of white socks when they take part in PT. “Soldiers may either wear black or white socks with both the Improved Physical Fitness Uniform, the IPFU, and the Army Physical Fitness Uniform, the APFU,” said Sgt. Maj. Eva Commons, the Army uniform policy sergeant major. “Socks must be plain with no logos and calf or ankle length. Ankle length socks must cover the entire ankle bone, and sock color is at the discretion of the Soldier.” The decision to allow black socks as an option for PT came after a summer survey directed by Sgt. Maj. of the Army Daniel A. Dailey sought feedback on five proposals for changes to the uniform. More than 18,500 Soldiers responded. Nearly 70 percent of respondents said black socks should be allowed with the new all-black Army Physical Fitness Uniform, which debuted late last year. The idea for the black socks was expressed by many NCOs who met with Dailey at various town-hall meetings he conducted during his first six months as Sergeant Major of the Army. In May at the Noncommissioned Officer Solarium 2015 Outbrief session at Fort Leavenworth, Kansas, Dailey told the NCOs assembled that they would be part of the decisions that steer the Army — in ways both big and small — into the future. “We [in senior leadership] sometimes lose touch; this is our way of getting back in touch with reality,” he said. “You NCOs are the representation of just that. This is a reality of what is going on across our Army … because you are at the heart of where organizational leadership begins.” Six months later, one of those decisions has come to fruition. -
See more at: http://ncojournal.dodlive.mil/2015/11/06/army-approves-black-socks-with-physical-training-uniforms/#sthash.l0VNONAf.dpuf

PFC Stephens Clark
>1 y
SFC Merino, this would actually benefit soldiers if the government issued each soldier socks that wicked sweat away to keep soldiers feet dry from sweating while deployed or even out on maneuvers. I think we learned that bezt during Vietnam, soldiers got trench foot from not having dry socks or proper socks worn. After all 100% of our Soldiers are always on their feet everyday.
(0)
Reply
(0)

SGM Eric Lobsinger
Posted >1 y ago
Unfortunately, this is news. We are in another draw-down period, Soldiers who have served honorably are losing their careers, the Army faces major issues within the ranks, we're looking at changing the retirement benefits, we are sending more soldiers back into Iraq, and this is front-line news? Simple answer ... authorize black socks ~OR~ authorize white socks ~OR~ whatever color is in vogue. Is there really an issue with uniformity in uniforms? (yes, play on words). One team, one fight. Forget the individuality ... and concentrate on the team. If changing socks is a great morale boost, them I'm all for it. If uniformity builds teamwork and unit cohesion, them I'm all for that. The important matter is the Army team.
(36)
Comment
(0)
show previous comments

1SG (Join to see)
>1 y
CSM (Join to see) Good point about the dress socks. I have not seen the ALARACT or MILPER on this new authorization but I bet they didn't think to cover that eventuality!
(3)
Reply
(0) 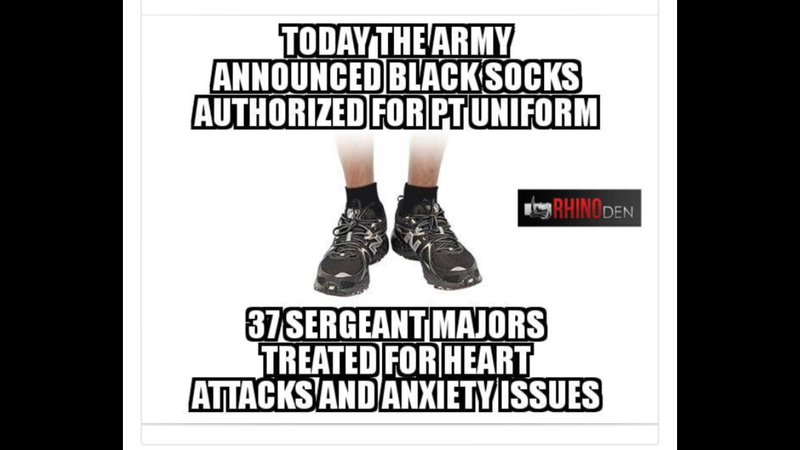 SGM Eric Lobsinger
>1 y
Thanks to my daughter for thinking of the "old" me when she saw this. But, I am feeling much better now.
(2)
Reply
(0)

LTC Kevin B.
Posted >1 y ago
I still don't understand this obsession with the black socks. I'm okay with the change, but I just can't understand why it's such an issue that it merits the attention of the highest levels of Army leadership. I don't see any functional reason for it. With some soldiers, it appears to just be a fashion statement. That's not my thing, but to each his/her own. White goes with everything, so it's not like white socks don't also go with the uniform. I certainly hope the preference for black doesn't have anything to do with black socks more easily concealing dirt/mud. If that's the case, using black socks allows a soldier to avoid regularly washing their socks, and that's just laziness (and poor hygiene).
(14)
Comment
(1)
show previous comments

SPC Anne Miller
>1 y
SPC Anne Miller - They would be so delighted in this info.
(0)
Reply
(0)
Show More Comments
Read This Next
RallyPoint Home