He was awarded the Medal of Honor by Lt. Gen. Alexander M. Patch III in Epinal, France, on September 28, 1944.

On May 23, 1944, near Carano, Italy, Van T. Barfoot, who had enlisted in the Army in 1940, set out to flank German machine gun positions from which fire was coming down on his fellow soldiers. He advanced through a minefield, took out three enemy machine gun positions and returned with 17 prisoners of war.

Visitation for Medal of Honor recipient Colonel Van T. Barfoot will be held, March 4, from 2 to 4 p.m. and 6 to 8 p.m. at Bliley’s-Central, located at 3801 Augusta Avenue, downtown Richmond, VA.

The funeral services will be held in private. Additionally, the family has requested that in lieu of flowers, donations can be made to the Sitter & Barfoot Veterans Care Center, located at 1601 Broadrock Blvd., Richmond, Va. 23224.

Under Governor’s orders the flags of the United States of America and the Commonwealth of Virginia will be flown at half-staff over the state Capitol building “in respect and memory of U.S. Army Col. Van T. Barfoot, World War II Medal of Honor recipient.”

On Sunday, Governor Bob McDonnell ordered that the flags be lowered at sunrise on Monday, March 5, and remain at half-staff until sunset.


In December 2009, the homeowners’ association (HOA) of the Sussex Square, where Barfoot lived in Henrico County, Virginia, ordered him to remove the flagpole from which he flew the American flag.

The association’s bylaws do not forbid flagpoles, but the HOA ruled Barfoot, then aged 90, would not be allowed to use it “for aesthetic reasons.” Barfoot contested the order, and received support from politicians, including Virginia Senators Mark Warner and Jim Webb, and White House Press Secretary Robert Gibbs. Barfoot won when the association dropped its request on December 8, 2009, effectively ending the controversy.


Full Citation:
For conspicuous gallantry and intrepidity at the risk of life above and beyond the call of duty on 23 May 1944, near Carano, Italy. With his platoon heavily engaged during an assault against forces well entrenched on commanding ground, 2d Lt. Barfoot moved off alone upon the enemy left flank. He crawled to the proximity of 1 machinegun nest and made a direct hit on it with a hand grenade, killing 2 and wounding 3 Germans. He continued along the German defense line to another machinegun emplacement, and with his tommygun killed 2 and captured 3 soldiers.

Members of another enemy machinegun crew then abandoned their position and gave themselves up to Sgt. Barfoot.

Leaving the prisoners for his support squad to pick up, he proceeded to mop up positions in the immediate area, capturing more prisoners and bringing his total count to 17. Later that day, after he had reorganized his men and consolidated the newly captured ground, the enemy launched a fierce armored counterattack directly at his platoon positions. Securing a bazooka, Sgt. Barfoot took up an exposed position directly in front of 3 advancing Mark VI tanks. From a distance of 75 yards his first shot destroyed the track of the leading tank, effectively disabling it, while the other 2 changed direction toward the flank.

As the crew of the disabled tank dismounted, Sgt. Barfoot killed 3 of them with his tommygun. He continued onward into enemy terrain and destroyed a recently abandoned German fieldpiece with a demolition charge placed in the breech. While returning to his platoon position, Sgt. Barfoot, though greatly fatigued by his Herculean efforts, assisted 2 of his seriously wounded men 1,700 yards to a position of safety. Sgt. Barfoot’s extraordinary heroism, demonstration of magnificent valor, and aggressive determination in the face of point blank fire are a perpetual inspiration to his fellow soldiers." 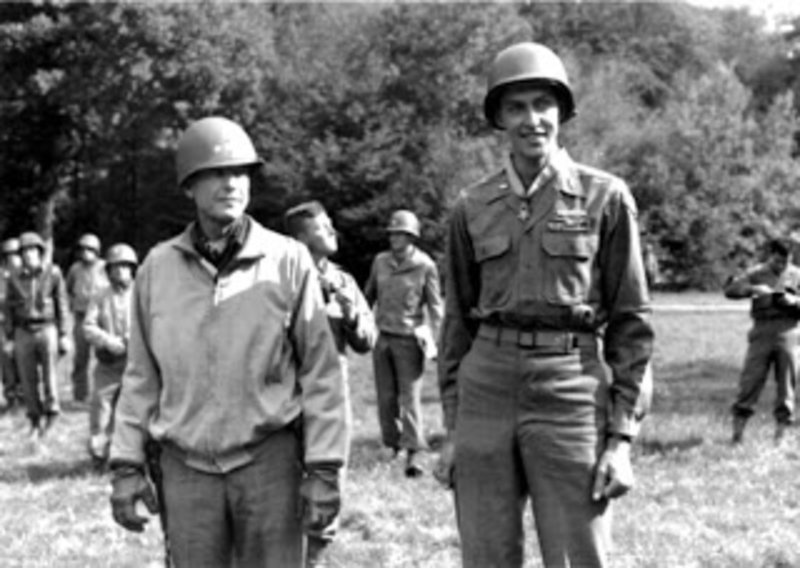 Posted from medalofhonornews.com
Posted in these groups: