Cruel and Unusual Punishment for the Capitol Rioters

But worse than that, the Capitol is now a symbol of both elitism and two-tiered justice: elitism on the part of our elected representatives, who don't give a rip when real rioting comes to our inner cities and leaves real businesses and real people in ruins, but who head for the fainting couch when an unarmed non-insurrection comes to their neck of the woods; and two-tiered justice for the dozens of pro-Trump Capitol protesters, who've been languishing in a DC-area jail for months while waiting to be tried for crimes ranging from the petty to the semi-serious, while the authentic thugs of antifa and Black Lives Matter simply skate away from their criminality without any accountability.

Remember last year, when those easily identifiable vandals yanked down or otherwise defiled one statue after another all across America? Or burned and looted and rioted in one urban center after another? Remember when those Portland hoodlums assaulted federal officers and tried to burn down a federal courthouse? Right, then, off ya go.

Investigative journalist Julie Kelly has written compellingly about the January 6 detainees, whose punishment for having protested the results of the 2020 presidential election is Job One for Joe, Nancy, and Attorney General Merrick Garland. "So far," she writes, "more than 400 people have been arrested in the nationwide manhunt with more charges to come, and at the same time, emerging evidence proves law enforcement allowed protestors to enter and remain in the building."

We wonder: How strong is the trespassing case — which is what most of these cases are — when law enforcement doesn't attempt to stop the trespassers from trespassing? And are there really no more pressing matters than this for our Department of Justice? Is there really nothing more important than to make the harshest example possible of a disorganized mob of pro-Trump protesters?

Apparently not. As the Daily Wire reports, "The U.S. Attorney for Washington, D.C., has called in prosecutors from ... the Violent Crime Narcotics Trafficking Section, Homicide Section, Asset Forfeiture and Money Laundering Section, Sex Offense and Domestic Violence Section, and Major Crimes Section. In some cases the prosecutors from those departments are prosecuting misdemeanors only."

Imagine the stuck-pig squealing we'd have heard if John Durham had enlisted the help of such heavy hitters to prosecute his Russia collusion investigation. Does anyone doubt that FBI lawyer Kevin Clinesmith would've gotten just a slap on the wrist for the very real crime of having falsified evidence for a FISA warrant to spy on a sitting U.S. president? That's two-tiered justice: one standard for the Left and another for the Right.

As Politico reported on April 19, most of the protesters who were arrested have since been released to await their trials, "but dozens of those deemed to be dangerous, flight risks or at high risk of obstructing justice were ordered held without bond [and] placed in so-called restrictive housing — a move billed as necessary to keep the defendants safe, as well as guards and other inmates."

"Restrictive housing" is a euphemism for 23-hour-a-day isolation. But by all means, let's keep the guards and the hardened criminals safe from those middle-aged, beer-bellied "white supremacists" with the MAGA hats and the Trump flags.

To the everlasting shame of House and Senate Republicans, the issue of the detainees' treatment has been taken up not by them but by two Senate Democrats, Elizabeth Warren and Dick Durbin. Let that sink in.

"Solitary confinement is a form of punishment that is cruel and psychologically damaging," Warren said in an interview. "And we're talking about people who haven't been convicted of anything yet." Warren rightly believes they're being punished into cooperation. Durbin says solitary confinement should be "a rare exception" with "clear justification."

So just where are all those Republicans? Those constitutional conservatives? When Big Government statists like Warren and Durbin are stronger champions of their political opponents' constitutional rights than the entire GOP caucus, something's wrong. Really wrong. Disgracefully wrong.

Most of the detainees have no criminal record, and yet, as Kelly writes, "The jail allows them to leave their cells for an hour a day. Religious services are not allowed; they can't exercise and access to personal hygiene such as showers is nearly nonexistent, according to defense lawyers and relatives I've spoken with."

These people aren't killers. They're political protesters. They don't believe Joe Biden got all 81 million of those votes on the up-and-up, and they certainly don't believe that this flawed election was properly investigated and adjudicated. And for those beliefs, the Democrats want to punish them, cruelly and unusually. That's the real Capitol offense.

Joe Biden called the January 6 riot "the worst attack on our democracy since the Civil War." It's a claim that's both laughable and shameful. And let's remember: The only person killed during that "deadly insurrection" was 35-year-old Ashli Babbitt, an unarmed 14-year Air Force veteran who was shot by a still-unnamed Capitol policeman. 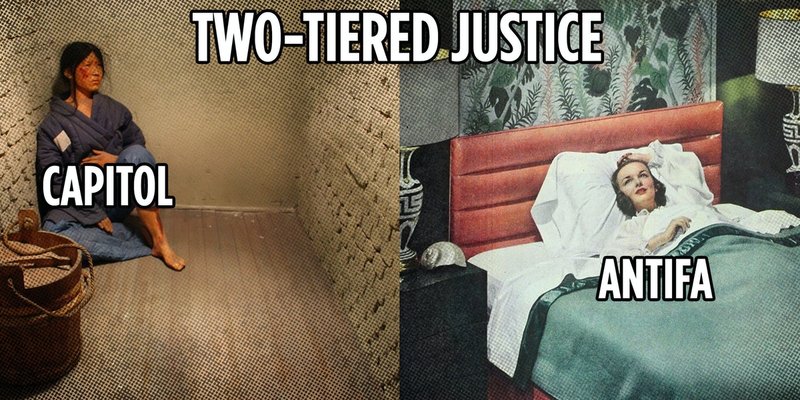 Cruel and Unusual Punishment for the Capitol Rioters 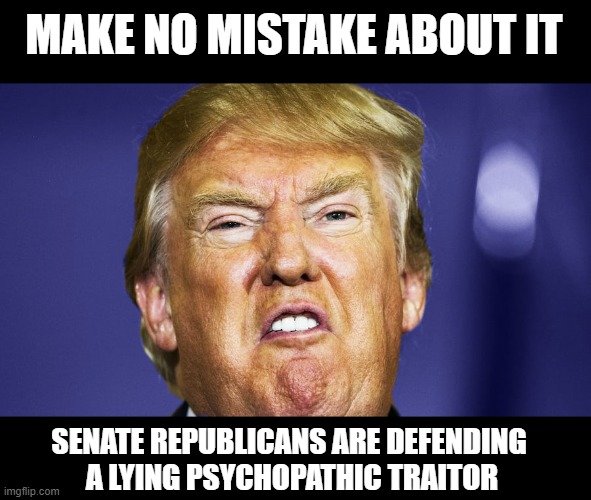 PO1 (Join to see)
Posted >1 y ago
This is likely an overall indictment of our particular penal system. But I think it is intellectually dishonest to dismiss these actions on the basis of the Capitol being "The People's house". It isn't a B&B. You can't just show up and demand an audience or a room to rest your weary head.
(2)
Comment
(0)
show previous comments

Insurrection: the act or an instance of revolting esp. violently against civil or political authority or against an established government

Portland was an insurrection, by definition.


Washington DC: revolt? sort of - but we will go with yes. Violent? yes. Against civil authority? No* Against political authority? No** Against established government? No.

Washington DC was not an insurrection, by definition***.

***Yes, I understand that my interpretation herein is shaky. I can completely understand how others would not interpret it the same as I. I will not say someone who interprets this differently than me has a learning disability or is stupid or ignorant - just that they have a different interpretation. Ultimately it will be up to the prosecutors to see if they want to charge anyone with insurrection - and up to the courts to see if prosecutors can actually make those charges stick. Based on my interpretation, which I admit is shaky, I believe prosecutors will not be able to make insurrection charges stick for anyone on January 6th - because my interpretation can provide reasonable doubt regarding the specifics for any individual accused.

That is not true for the Portland riots, however. Those were VERY CLEARLY directed against established civil and political authorities. Prosecutors aren't charging insurrection - but they could. And they could make it stick, IMHO.


I have no learning disability. I just don't allow the leftist double speak to cloud my judgment.
(1)
Reply
(1)

Capt Gregory Prickett
>1 y
SSgt (Join to see) - No, that's not the "key word" in the statute. See Ralph W. Conant, "Rioting, Insurrection and Civil Disobedience", 37 The Am. Scholar 420 (1968). One of the keys is prior planning, which you had in the Capitol insurrection, but did not have in the Portland riots.
(0)
Reply
(0)

Capt Gregory Prickett
>1 y
SFC Casey O'Mally - I've told you before that I'm not a leftist. Let me know when you are going to respect that, and I'll unblock you.
(0)
Reply
(0)

SSgt (Join to see)
>1 y
There is plenty of proof that the attacks in Portland were coordinated days in advance. Shoots your theory all to hell. Just like the murder charge you were talking about for whoever clocked the officer with a fire extinguisher, who died on Jan 7th. That was a news narrative and you bought it hook, line and sinker, then heavily chastised anybody here on RP that said "no, he was not hit with any fire extinguisher" - myself included.

I'm done with your arm chair lawyering about incidents you only know 3rd hand via the news. You are not on any of the evidentiary chains, you are not doing any of the actual discovery, nor are you doing depositions or planning the legal offense or defense.
(0)
Reply
(0)

PFC (Join to see)
Posted >1 y ago
The justice system is always two tiered. Just depends on what side of the coin you land on sadly.
(0)
Comment
(0)
Read This Next
RallyPoint Home