SFC (Join to see)
4.47K
73
27
12
12
0
The Army has counseled a command sergeant major after a firestorm of comments called her out on Facebook for alleged violations of the Army's appearance standards. But her unit, the 8th Military Police Brigade, has also called out soldiers for using social media to try and shame a CSM. Officials called it the wrong venue for corrections and warned against the “overwhelmingly disrespectful, degrading and unprofessional” wave of comments.

Command Sgt. Maj. Angelia Flournoy’s picture appeared April 26 and 27 on a pair of military-themed Facebook pages; the images appeared to indicate her hair was in violation of Army Regulation 670-1. In particular, the overall bulk of her hair and size of bun seem to be larger than regulations allow, with the bun extending well below the collar. Regulations declare a maximum volume of two inches of hair from the scalp and a bun that extends back no more than 3.5 inches. The post originated on U.S. Army Military Police WTF Moments, and was shared by U.S. Army W.T.F! moments a day later.
The posts spawned thousands of comments, many expressing dismay that a senior noncommissioned officer would so brazenly break regulations. The Army acknowledged the violation.

"CSM Flournoy's hair was in violation of AR 670-1 in some pictures because it extended past the bottom of her collar," Maj. Leslie Waddle, spokeswoman for the 8th Theater Sustainment Command wrote in an e-mail response to questions from Army Times. "CSM Flournoy has adjusted her hair to make sure that it has the ability to remain in a tight bun throughout the day. She has been very humble through this entire process and wants the focus to go back to the positive things her brigade is doing."

Waddle said there is no further investigation into Flournoy at this time, and that "we are not aware" of any punishment for soldiers who spoke up.

The MP brigade is a subordinate unit of the 8th TSC.

On Wednesday, a statement from Flournoy was posted on her unit's Facebook page. She said she “appreciate[s] those who have corrected me and expressed their concern about my appearance not being fully in compliance,” though she did not directly admit to breaking the rules.

“You are right to insist standards be set and met by all Soldiers. I sincerely regret how this has distracted from the great things the 8th Military Police Soldiers are doing around the world,” her statement continued.

In the next post, shared from 8th TSC's page, 8th TSC Command Sgt. Maj. Gregory Binford was pictured next to Flournoy. According to the caption, he is pointing her attention to regulations in an NCO doctrine manual. An attached statement from Binford says leaders must set the example regarding Army values, and that humble leaders can selflessly accept criticism, assess it, and make changes when necessary.

“No one can overcome a weakness until they see it in themselves. When that epiphany comes, and the decision to change is made, it is a moment worthy of respect,” CSM Binford's statement said. “I believe CSM Flournoy has had that epiphany after our discussions about the important role we play as senior NCOs.”
The posts generated a mixed reaction. Some appreciated the recognition of the error and suggested people move on from the incident. But others panned the posts as disingenuous photo-ops that missed the point of the outrage. And several also said this was not a new issue for Flournoy, suggesting that there had been prior attempts to correct the senior leader’s appearance — including hair and makeup violations of AR 670-1 — through other channels.

For many the issue stemmed from a perceived lack of accountability for senior leaders, with the Army only acting when its hand is forced by bad publicity.

“The sad thing is that this has gone on for a long period of time and it took social media to make any kind of correction. It should have been addressed a long time ago! That's what the uproar is about, and why there is such an issue,” said Jamie Spencer Harbison, on the 8th MP Brigade Facebook page.

Many comments were inappropriate, and included jabs at not only Flournoy's leadership style but her personal life. On Monday, the brigade’s Facebook page warned it would block and delete any “violation of the DoD social media policy.” 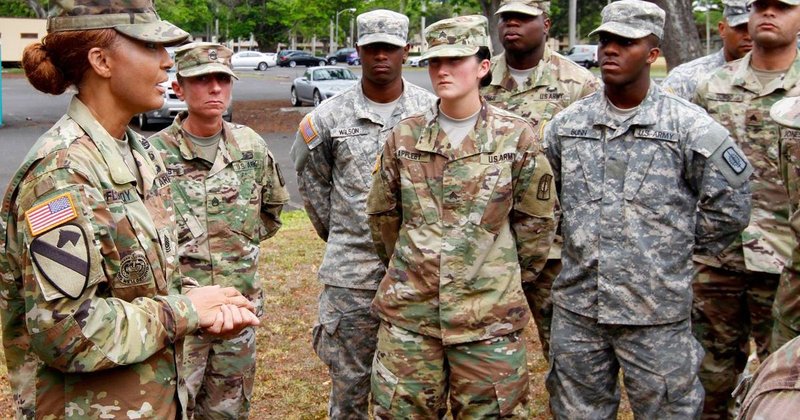 SMSgt Dr. G. A. Thomas
Posted >1 y ago
You should've never had to go to social media. This should've been corrected on the spot.
(12)
Comment
(0)

CSM Charles Hayden
>1 y
Agreed!!!!!!! SMSgt Dr. G. A. Thomas Amazing, no one owns the problem, but it should not have been on social media? From the 400,000 + posts and comments, it was not anew problem! I will watch for additional fallout caused by the situation!
(4)
Reply
(0)

SFC (Join to see)
>1 y
I agree but the fact remains that it took social media to get this recognized because she was obviously walking around like this for awhile. Shame on the leadership for not acting quicker.
(3)
Reply
(0)

SSG Wesley Peck
>1 y
In the photo from the link, it appears that her bun pulled her hair down and out. Could be from running, or other activity. The CSM should consider other methods of hair restraint, or reducing the volume of hair.
(0)
Reply
(0)

CSM Richard StCyr
Posted >1 y ago
While I agree some comments folks made were harsh. How about just not wandering around knowingly out of standard so people don't have a reason to be harsh with you.
So the CSM apologizes, half the stories posted about the apology are more about how terrible it was that the misbehavior hit social media.
This is why I pray for wisdom for those who lead our Troops.
(6)
Comment
(0)

SFC David Pratt
>1 y
Pray for the troops too CSM.... In many cases the Army is promoting the wrong people. This is a result of self written NCOER's, forged PT and Weapon Quals coupled with the Army's Affirmative Action Plan. There is accepted dereliction of duty from officers and sr nco's when it comes to sr nco ncoer's; that is the wrong answer. The troops deserve the best leaders with the most potential: they deserve leaders who do not violate regulations through wilful neglect.
(2)
Reply
(0)

CSM (Join to see)
Posted >1 y ago
What strikes me is that as a CSM she should be the epitome of professionalism.. The hair is just the beginning.. I don't believe bashing her on social media was appropriate and it was not necassary.

I read that SMA Dailey summoned her to appear, why it would get that far is beyond me.... Antoher CSM should have had a fave to face counseling of epic proportions and this would have been over..
(4)
Comment
(0)

SFC Joseph Belote
>1 y
Sadly her face to face has to be escalated to the SMA. Her next higher echelon CSM who counseled her and she suddenly had her big revelation that her appearance was out of compliance should be embarrassed enough by this that he too takes a step back. We forgive Privates and sometimes a Specialist or two for a grevious violation; however, an E-5 Buck SGT would lose a stripe for being so immature as to wearing their hair this blatantly out of regulation.

As they quoted 670-1 about how far the hair distends from the head or below or over the collar line, what about the part that talks about how the hair should not appear to effect the natural appearance of the hat?

Admittedly, I'm no expert on the current standards. I believe that as CSM who is supposed to be the standards bearer. They should be of such stoic stature that never would their appearance be a distraction or question of "are they within appearance standards".
(4)
Reply
(0)

SFC Joseph Belote
>1 y
SGT John Hamby - Inhouse-yes. However, I think it speaks loudly that it had to be taken to the out side. If their open door policy truly worked and was being communicated, then it may have been able to be kept inhouse. Quite obviously these soldiers were to the point that it needed to be outed. It's sad all the way around.
(2)
Reply
(0)

SGT John Hamby
>1 y
SFC Joseph Belote - exactly! but apparently, keeping things 'Inhouse' was not working, hence the shitstorm that followed, and in my opinion, i'm glad that it did not get to that 600lb. Gorilla with the 2 stars on his collar
(2)
Reply
(0)
Show More Comments
Read This Next
RallyPoint Home