The VA served 5.8 million people in 2014, according to a VA summary of expenditures by state.

1812 - The Naval Home, a facility for disabled veterans, opens in Philadelphia.

1833 - Congress establishes the Bureau of Pensions to assist veterans.

1865 - At the end of the U.S Civil War, there are 1.9 million Union veterans. Congress authorizes the National Asylum of Disabled Volunteer Soldiers, a system of residences for disabled and indigent veterans.

1924 - Congress passes the World War Adjustment Compensation Act, a system of bonuses for veterans of World War I. Any veteran entitled to more than $50 is given a certificate payable 20 years in the future and worth about $1,500.

July 21, 1930 - President Herbert Hoover signs an executive order consolidating the Veterans' Bureau, the Bureau of Pensions and the National Homes for Disabled Volunteer Soldiers into the Veterans Administration. The VA has a budget of $786 million and serves 4.6 million veterans.

1932 - During the Great Depression, thousands of World War I veterans march on Washington, DC, to demand payment of their bonuses. After the marchers are forcibly removed, the VA pays their transportation costs home. Congress authorizes early payment of the bonuses in 1936.

1933 - The VA establishes the Board of Veterans' Appeals.

1945 - At the end of World War II, there are approximately 15 million veterans in the United States, and all 97 VA hospitals are filled to capacity. In response, the VA opens 54 new hospitals over the next five years.

1958 - Congress pardons Confederate service members and extends benefits to the one remaining survivor.

1979 - Congress orders the VA to study the effects on veterans of the Agent Orange defoliant used in Vietnam.

1983 - The Agent Orange study is transferred to the Centers for Disease Control.

1988 - The U.S. Court of Appeals for Veterans Claims is founded. It gives those who served in the military a chance to challenge individual decisions made by the Department of Veterans Affairs.

March 15, 1989 - President Reagan signs legislation elevating the Veterans Administration to Cabinet status, and renaming it the Department of Veterans Affairs.

March 1991 - The VA orders Veterans Affairs Medical Center, in North Chicago, to stop performing vascular and orthopedic surgeries after the deaths of more than 40 patients in 1989 and 1990. After a review of the cases, the VA accepts responsibility for the deaths of eight patients.

1996 - President Bill Clinton orders the VA to provide benefits to Vietnam Veterans who develop prostate cancer or peripheral neuropathy after a National Academy of Sciences suggests there is a link between those diseases and Agent Orange exposure.

2006 - Two teens steal a laptop computer and external hard drive containing the personal information of approximately 26 million veterans from the home of a VA data analyst. The laptop and hard drive are later recovered and FBI testing suggests that the data was never accessed. In 2009, the VA pays $20 million to settle a class action lawsuit brought by veterans.

February 2009 - The VA notifies more than 6,000 patients who went to Alvin C. York VA Medical Center in Murfreesboro, Tennessee, that they may have been exposed to infectious diseases at the clinic due to contaminated endoscopic equipment.

February 2009 - The Charlie Norwood VA Medical Center in Augusta, Georgia, notifies more than 1,200 people that they may have been treated with contaminated equipment.

March 2009 - The VA sends letters to more than 3,000 people who may have had colonoscopies at VA facilities in Miami, warning that they may have been exposed to hepatitis and HIV. According to hospital officials, a review of safety procedures found that tubing used in endoscope procedures was rinsed but not disinfected.

2010 - The VA notifies more than 1,800 veterans treated at the John Cochran VA hospital in St. Louis that they may have been exposed to infectious diseases during dental procedures.

July 2010 - The VA unveils new regulations making it easier for men and women who served in the armed forces to receive benefits for post-traumatic stress disorder. Under the new rules a veteran only needs to demonstrate that he or she served in a war and performed a job during which events could have happened that could cause the disorder.

November 2010 - The VA announces that it will cover disability compensation for an additional three diseases linked to Agent Orange exposure among Vietnam veterans. They are hairy cell leukemia, Parkinson's disease and ischemic heart disease.

2011 - Nine Ohio veterans test positive for hepatitis after routine dental work at a VA clinic in Dayton, Ohio. A dentist at the VA medical center there acknowledged not washing his hands or even changing gloves between patients for 18 years.

November 2013 - A CNN investigation shows that veterans are dying because of long waits and delayed care at U.S. veterans hospitals. The VA has confirmed six deaths tied to delays at the Williams Jennings Bryan Dorn Veterans Medical Center in Columbia, South Carolina.

January 30, 2014 - CNN reports that at least 19 veterans have died because of delays in simple medical screenings like colonoscopies or endoscopies, at various VA hospitals or clinics. This is according to an internal document from the U.S. Department of Veterans Affairs, obtained exclusively by CNN, that deals with patients diagnosed with cancer in 2010 and 2011.

April 2014 - Retired VA physician Dr. Sam Foote tells CNN that the Phoenix Veterans Affairs Health Care system maintained a secret list of patient appointments, designed to hide the fact that patients were waiting months to be seen. At least 40 patients died while waiting for appointments, according to Foote, though it is not clear they were all on secret lists.

May 9, 2014 - The scheduling scandal widens as a Cheyenne, Wyoming, VA employee is placed on administrative leave after an email surfaces in which the employee discusses "gaming the system a bit" to manipulate waiting times. The suspension comes a day after a scheduling clerk in San Antonio admitted to "cooking the books" to shorten apparent waiting times. Three days later, two employees in Durham, North Carolina, are placed on leave over similar allegations.

May 20, 2014 - The VA's Office of the Inspector General announces it is investigating 26 agency facilities for allegations of doctored waiting times.

May 28, 2014 - A preliminary report by the VA's inspector general indicates at least 1,700 veterans waiting to see a doctor were never scheduled for an appointment and were never placed on a wait list at the Veterans Affairs medical center in Phoenix.

June 9, 2014 - The Department of Veterans Affairs releases the results of an internal audit of hundreds of Veterans Affairs facilities. It reveals that 63,869 veterans enrolled in the VA health care system in the past 10 years have yet to be seen for an appointment.

June 23, 2014 - In a scathing letter and report sent to the White House, the U.S. Office of Special Counsel (OSC) expresses concern that the VA hasn't adequately addressed whistleblower complaints of wrongdoing. The report also slams the VA's medical review agency, the Office of the Medical Inspector (OMI), for its refusal to admit that lapses in care have affected veterans' health.

June 24, 2014 - A report issued by Sen. Tom Coburn's office finds that more than 1,000 veterans may have died in the last decade because of malpractice or lack of care from VA medical centers.

June 24, 2014 - Pauline DeWenter, a scheduling clerk at the Phoenix VA, tells CNN that records of dead veterans were changed or physically altered, some even in recent weeks, to hide how many people died while waiting for care at the Phoenix VA hospital.

July 31, 2014 - The Senate approves a $16 billion bill to overhaul the Department of Veterans Affairs.

August 26, 2014 - The VA office of the Inspector General releases a report on delays at the Phoenix VA health care system. The study looked at more than 3,000 cases and found that dozens of veterans had "clinically significant" delays in care, and six of them died. The report says investigators could not conclusively link their deaths to those delays.

September 17, 2014 - In a hearing before the House Committee on Veterans' Affairs, Acting Inspector General Richard Griffin reverses his opinion. Griffin says that long wait times at VA health care facilities in Phoenix did contribute to a number of veterans' deaths.

November 10, 2014 - VA Secretary Robert McDonald announces the VA has taken "disciplinary action" against 5,600 employees in the last year, and he said more firings will soon follow. Beyond sacking officials that don't meet the VA's values, McDonald says the reforms will include the establishment of a VA-wide customer service office to understand and respond to veteran needs, new partnerships with private organizations and other reorganizations to simplify the department's structure.

November 13, 2014 - The VA announces it has fired Terry Gerigk Wolf, the director of the Pittsburgh VA Healthcare System, for "conduct unbecoming of a senior executive and wasteful spending." An outbreak of Legionnaire's disease in 2011 and 2012 killed six veterans at the facility.

November 24, 2014 - Sharon Helman, the head of the Phoenix VA, is fired. She was put on administrative leave following a CNN interview in April, in which she denied the existence of a secret list used to cover up delays in patient care.

December 15, 2014 - The VA Inspector General releases a report that indicates a VA fact sheet contained misleading information, overstating the scope of its review of unresolved cases. The VA claimed that it reviewed cases dating back to 1999 but it only examined cases dating back to 2007, according to the report. The inspector general also questions how the VA resolved an issue with delayed appointments. The VA reported that it reduced the number of appointments delayed more than 90 days, from 2 million to 300,000, but did not provide paperwork detailing whether the appointments were canceled or if the patients received treatment, according to the inspector general.

March 10, 2015 - CNN reports that more than 1,600 veterans waited between 60 and 90 days for appointments at facilities operated by the VA Greater Los Angeles Healthcare System. About 400 veterans waited six months for an appointment, according to documents provided to CNN. The average wait time, according to documents dated January 15, 2015, was 48 days.

September 2, 2015 - The VA Inspector General releases a review of alleged mismanagement at the VA's Health Eligibility Center. According to the review, more than 307,000 deceased veterans were listed as enrollees with pending VA applications. The inspector general calculated that about 35% of all pending records were for deceased veterans. CNN reports that many of the deceased veterans may have died while awaiting treatment. 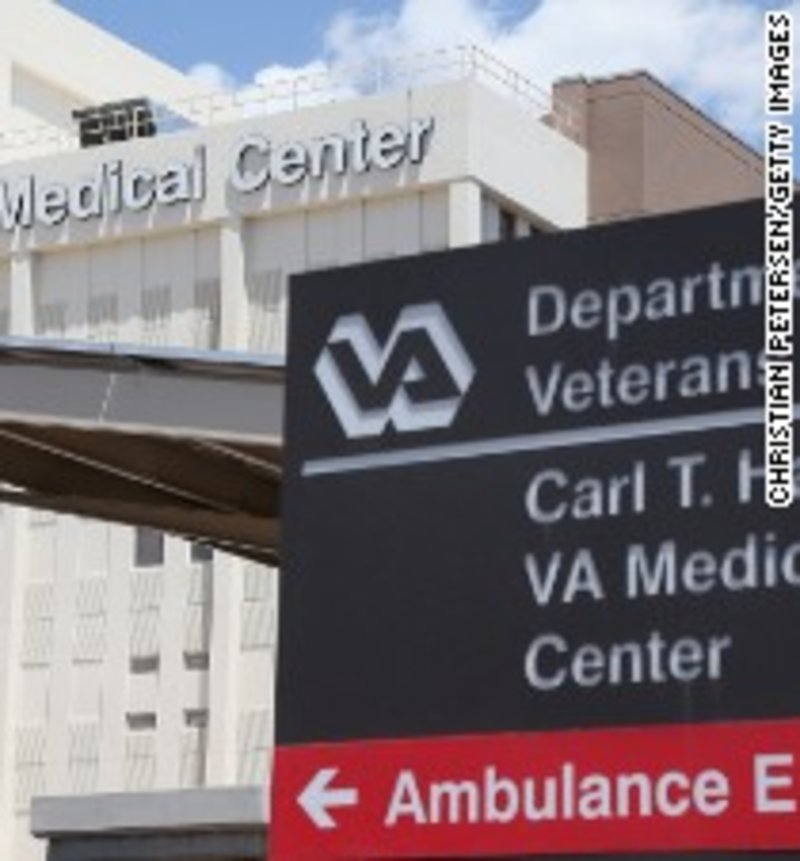