Five things you need to know about flu season

Navy Medicine is gearing up to protect sailors and Marines from this year’s viruses by pushing to get 90 percent of each service's active-duty population vaccinated.

"It's important for our Marines to get their flu shot because influenza adversely impacts their ability to train and to fight," said Lt. Cmdr. Jaime Vega, the Navy Bureau of Medicine’s public health officer. "You can't rule the battlefield, or be ready to do so, if you are out sick with the flu."

Vega says that though for the past three years, the service had reached its vaccination goals, it’s always an uphill battle to fight the misconceptions about the vaccine in the ranks.

Flu season usually runs from October through May, though it’s expected to peak somewhere around February. Just a month into the season, the Navy is calling on all sailors and Marines to not only get themselves vaccinated, but their families, too.

Here’s five things Vega says you need to know about the flu and why getting protected is critical for yourself, your family, your command and shipmates.


“Influenza is not the common cold, but it is a common respiratory illness caused by the influenza virus,” Vega said. “Usually people can feel a cold coming on over the course of a few days — the flu is different, you usually go to sleep well and wake up not well.”


Because it is caused by a virus, it’s not something that can be fixed with antibiotics, either. Though you can treat the symptoms somewhat, when the body becomes infected it must fight off the infection.


“You get it by coming into [contact with] droplets that are created by people already sick with the flu when they talk, sneeze or cough,” Vega said. “You can also get it by touching an object or surface that has flu in it and touching your nose or mouth.”


2. I got vaccinated last year — isn’t that still good?


The short answer is no.

Like any adversary, flu viruses adapt and change over time. The Center for Disease Control tracks what flu viruses are making the rounds each year and it’s that intel that determines what the annual vaccine will be.

It’s a constant battle, Vega says, to stay ahead of the virus.


“This season’s flu vaccine is designed to protect from viruses that research indicates will be the most common,” Vega said. “These researchers look at the viruses that are out there and then based on their research, they formulate the best fix vaccine.”


This season’s vaccine, he said, will provide someone the best protection against getting the viruses expected to be circulating this season.


And what the Navy uses is the same as what is being given by civilian doctors — but it’s free of charge to sailors, Marines and their families.


There are many misconceptions out there about the flu, from how you get it to whether you can be cured of it with medicine and most are wrong. Many people, he says, will find any excuse to avoid getting shots.


“The biggest thing that people use to justify that getting a flu shot gives you the flu — it’s absolutely not true,” he said. “Yes, the common side effects can bring a little discomfort where the injectable vaccine is given and it’s not uncommon for people to feel just a little fatigue — but it’s not the flu.”


What that discomfort is, he said, is your body beginning to develop the antibodies that will fight off the virus if it finds its way into your system.


Another misconception is that you’re immune from the time you get the shot — which isn't the case.


“That’s why it’s best to get the vaccine as early in the season as possible,” Vega said. “It can take up to two weeks for your body to build up it’s immunity once you’ve had the shot.”


Simply put, the flu can make any organization, from a combat unit to a civilian office setting stop dead in its tracks.


“You always hear about things that are force multipliers,” Vega said. “Well, Influenza is what I call a ‘force reducer.' Whether you are dealing with an office setting, logistic shops or a ship or submarine — it’s people sick in any one of those settings because it’s so contagious. It spreads so fast that it can make day-to-day business stop as it spreads through the unit — and the bottom line is that it can for a time can really adversely impact combat readiness.”


That’s why, he said, the Navy pushes every year for everyone and their families to get the vaccine.


“When you have 90 percent or more people vaccinated against the flu in a given community, the less that virus can spread through it, and fast," Vega said. “But it’s not just the active duty, but their families, as you can catch it at home, too.”


So, the more people are vaccinated in a given unit as well as their families, the less chances that someone will develop the flu and spread it around.


“Our goal is to vaccinate the herd to protect the individual,” he said.


In addition to getting yourself and your loved ones vaccinated, Vega said, there are other steps that can be taken, such as consistent hygiene, and managing exposure to those already sick helps a lot.


In addition, he also suggests:

If you do get the flu, you should also limit contact with others as much as possible to keep from infecting them — most of all, stay home. Don’t go back to work until at least 24 hours after you no longer have a fever, without the use of a fever-reducing medicine such as acetaminophen. 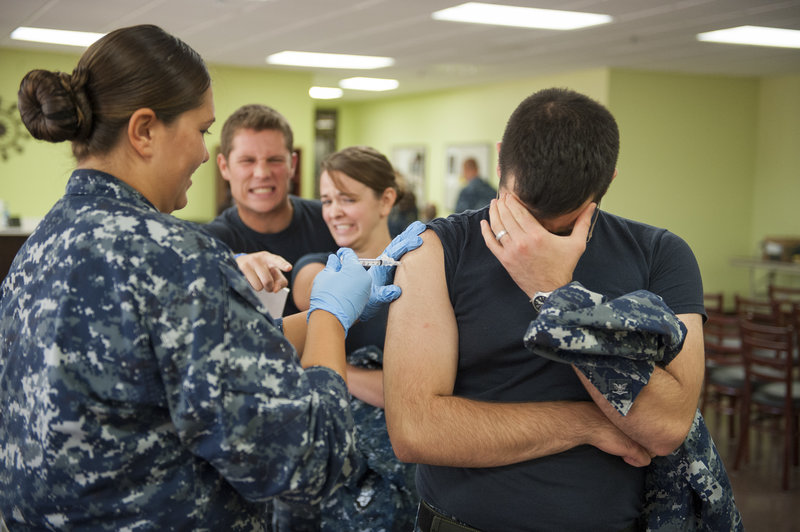 Five things you need to know about flu season

MCPO Roger Collins
Posted 5 y ago
Aside from the troops, the young and elderly are particularly susceptible to flue. Get the damned vaccination, there is no direct cost in most instances. Don't listen to the BS from those afraid of a tiny needle. In addition, one of the biggest killers of the elderly is pneumonia, get that one too or at a minimum, make sure your will is current.
(2)
Comment
(0)
Show More Comments
Read This Next
RallyPoint Home