Lt Col Charlie Brown
312
3
1
2
2
0
A prominent foreign policy journal boosted its advertising deal with a Chinese state-controlled media outlet in recent months, even as other news organizations have ended similar partnerships due to concerns about publishing propaganda.

China Daily, a news agency controlled by the Chinese Communist Party, paid Foreign Policy $291,000 over the past six months as part of an online advertising campaign, according to records that the Chinese outlet filed under the Foreign Agents Registration Act. China Daily has paid the magazine more than $630,000 in all since late 2019. The most recent payment is the largest China Daily has made in a six-month period to Foreign Policy.

China Daily spends millions of dollars each year on partnerships with American and European news companies. U.S. officials and advocacy groups have warned that the Communist Party uses the content to spread propaganda and gain legitimacy in the West. As a result, several prominent media organizations, including the New York Times and Economist, have cut ties with China Daily over concerns about working with state-run media.

One article asserts that Tibetans "appreciate the work of the Communist Party of China." Another touts China's "patriotic education" of Tibetans and "peaceful liberation" of Tibet. Foreign Policy published the articles in conjunction with the 70th anniversary of an agreement between China and Tibet.

The International Campaign for Tibet, a Tibetan advocacy group, said that a recent series of articles published on "ChinaWatch" are an "affront" to Tibetans who oppose Chinese Communist Party rule.

"Foreign media outlets have a vital role to play in making the world aware of China's horrific abuses and cultural genocide in Tibet. Unfortunately, publications of every kind have accepted China's money in exchange for promoting its fake news," the International Campaign for Tibet told the Washington Free Beacon. "Although we understand that media organizations face enormous financial pressure today, we hope they won't help the Chinese government undermine the very free speech and objective reporting on which a free press depends."

Other "ChinaWatch" articles praise the "superiority and efficacy" of China's socialist system and China's coronavirus vaccines. Others are highly critical of the U.S. government, including one published this month that said that the United States is responsible for tensions between Washington and Beijing.

Foreign Policy has faced criticism before for working with China Daily.

"The greater concern with this is media organizations could become reliant upon streams of funding like this, and that it could over time, whether consciously or unconsciously, start to shape editorial decisions made by the publication," said John Dotson, the deputy director of the Global Taiwan Institute, which monitors Chinese Communist Party disinformation.

Dotson said that China's propaganda agencies use advertising partnerships with news companies to gain "second-hand respectability" in the West.

"They're hoping to pick up legitimacy over time." 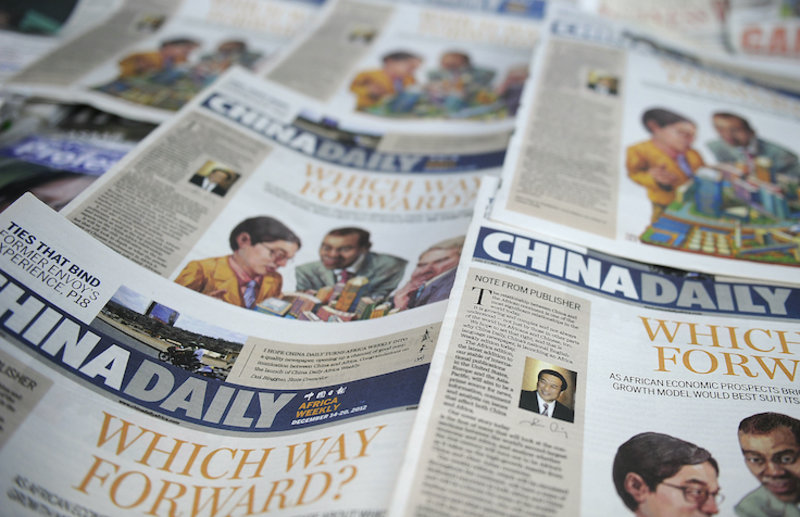 Posted from freebeacon.com
Posted in these groups: