Lawfare blog explains why attorney-client privilege, and executive privilege, may not save Rudy Giuliani from providing Congress his Ukraine records.

Rudy really ought to stay out of interviews... 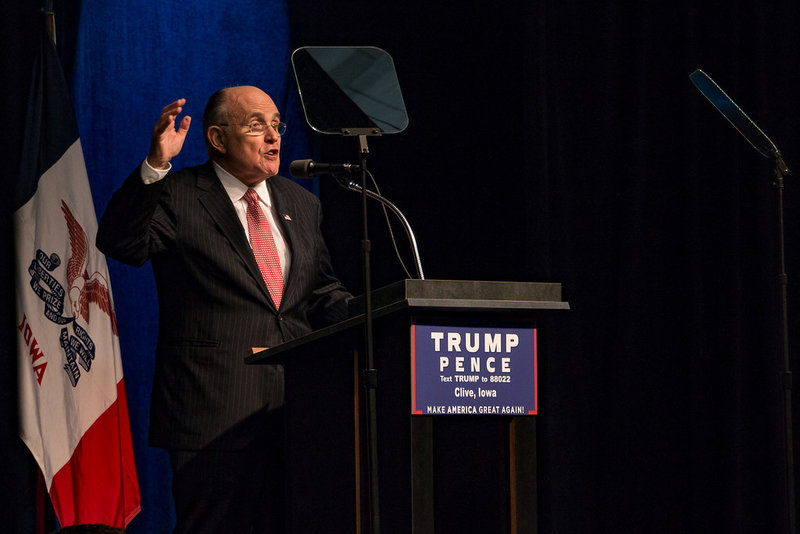 Posted from lawfareblog.com
Posted in these groups:

Office of the President (POTUS)
Posted 3 y ago
Responses: 3

CW4 Guy Butler
3 y
You have to give him credit, though - he’s demonstrating the rare ability to plead a parking ticket down to murder-one.
(1)
Reply
(0)

MCPO Roger Collins
Posted 3 y ago
Note the credentials of the author and friends, one of which was cited with Contempt of Congress for refusing to provide ordered documents.

John E. Bies is Chief Counsel at American Oversight, a non-profit focused on government accountability. He served for eight years in the Obama administration at the Department of Justice, first as Counselor to Attorney General Eric Holder and then spending seven years as a Deputy Assistant Attorney General in the Office of Legal Counsel where he advised White House and executive branch officials on FOIA, Congressional oversight, executive privilege, ethics, separation of powers, and other constitutional, statutory, and administrative law issues. Prior to his service in the government, Bies handled complex civil litigation and investigation and enforcement matters as a partner at Covington & Burling LLP and clerked for Judge Sandra Lynch on the First Circuit. He received his law degree with high honors from the University of Chicago Law School.
(0)
Comment
(0)
show previous comments

CPT Lawrence Cable
3 y
Capt Gregory Prickett - What's his win rate in the only important court, SCOTUS? It's a lot higher the 6%, or 9%, or whatever statistic you want to make use. How many of those loses were at state level, or better yet, in the 9th Appeals Court, which I believe that a decade long reversal rate of about 76%.
Since you have a law degree, then you know what I stated above to be accurate. The only opinion that will hold weight on this subject is SCOTUS.
(1)
Reply
(0)

Capt Gregory Prickett
3 y
CPT Lawrence Cable - Actually, the most overturned appeals court is the 6th Circuit, and has it has been between it and 11th Circuit for several years. The 9th Circuit is further down, behind appeals from the States and the 11th Circuit.

Second, no, the only opinion the matters is not SCOTUS. They only hear a few cases every year, and it's only when they hear cases that it matters. Otherwise the Circuit Court decision is the final word.

Third, most of the SCOTUS decisions that you're counting are not even decisions on the merits, but are instead preliminary decisions, say on an injunction on asylum seekers. Many of those decisions are later mooted, and are not typically counted as final victories. At SCOTUS, Trump's running just ahead of Obama's record, just above 50%. BTW, Obama had the worst record since Zachary Taylor.
(0)
Reply
(0)

CPT Lawrence Cable
3 y
Capt Gregory Prickett - Lawyer quibbling a bit there. It depends on your criteria for counting a Reversal. If one uses the "full reversal rate" measure, where the circuit court gets credit for an affirmation if the higher court agrees with it's opinion on a case that was decided earlier. With that method, they drop to second, with still isn't very good, but the 9th goes back to number one. I would point out additionally that the 9th hears a lot more cases and is certainly the target court for the Progressive lawsuits. So they have the distinct advantage of being able to hose up more decisions and still keep the same record.
It ain't final till the SCOTUS says it's final. Or at least until the next change in bent of the Court.
Oh, and the 6th is the local Appeals Court, and yes, they have made some bonehead rulings.
(1)
Reply
(0)

Capt Gregory Prickett
3 y
CPT Lawrence Cable - actually I counted both full and partial reversals, because that's the way you are supposed to count them. And the 9th was at fourth place, as I noted.
(0)
Reply
(0)

1SG (Join to see)
Posted 3 y ago
He will try it.
Truly, I think Rudy could go up to the Hill and truthfully say he doesn't remember anything about what they are asking about. But his papers are his own and priviledged unless Rusy himself is accused of a crime in the course of representing his client (a la Cohen). Since he is not an Executive Branch official, Congress can't do that. All they can do is say "mother may I" to the Justiice Department, which will say "LOL, nope".
(0)
Comment
(0)
show previous comments

Capt Gregory Prickett
3 y
1SG (Join to see) - After that. It can be done, it just depends on whether the Dems have the cajones.
(0)
Reply
(0)

1SG (Join to see)
3 y
Capt Gregory Prickett - They don't. That is abundantly clear.
I think that it is informative that in announcing a "formal impeachment inquiry" they chose to not have a vote on the House floor. That does two things:
1. It gives reluctant Dems cover so they are not on record for or against impeachment prior to whatever this investigation turns up.
2. It denies the minority the subpoena power currently only enjoyed my the majority/ committee chairs. This allows them to craft and refine the case while denying exculpatory information to be heard in the hearings.
I don't believe in this just being happenstance. Due process hasn't really been a thing throughout this gong show.
(0)
Reply
(0)
Read This Next
RallyPoint Home