Benz built his first four-wheeled car in 1891. He started Benz & Company and by 1900 became the world's largest manufacturer of automobiles. He also became the first legally licensed driver in the world, when the Grand Duke of Baden granted him the distinction. What's especially remarkable was that he was able to achieve these milestones despite coming from a relatively modest background.

Early Life and Education
Benz was born in 1844 in Baden Muehlburg, Germany (now part of Karlsruhe). He was the son of a locomotive engine driver who passed away when Benz was only two years old. Despite their limited means, his mother ensured he got a good education.

Benz attended the Karlsruhe grammar school and later Karlsruhe Polytechnic University. He studied mechanical engineering at the University of Karlsruhe and graduated in 1864 when he was only 19 years old.

In 1871, He founded his first company with partner August Ritter and called it the "Iron Foundry and Machine Shop," a supplier of building materials. He married Bertha Ringer in 1872 and his wife would go on to play an active role in his business, such as when he bought out his partner, who had become unreliable.

Developing the Motorwagen
Benz began his work on a two-stroke engine in hopes of establishing a new source of income. He had to invent many parts of the system as he went along, including the throttle, ignition, spark plugs, carburetor, clutch, radiator, and gear shift. He received his first patent in 1879.

In 1883, he founded Benz & Company to produce industrial engines in Mannheim, Germany. He then began designing a motor carriage with a four-stroke engine based on Nicolaus Otto's patent. Benz designed his engine and the body for the three-wheel vehicle with electric ignition, differential gears, and water-cooling.

In 1885, the car was first driven in Mannheim. It achieved the speed of eight miles per hour during a test drive. After receiving a patent for his gas-fueled automobile (DRP 37435), he began selling his automobile to the public in July of 1886. Parisian bicycle-maker Emile Roger added them to his line of vehicles and sold them as the first commercially-available automobile.

His wife helped promote the Motorwagen by taking it on a historic 66-mile trip from Mannheim to Pforzheim to show its practicality for families. At the time, she had to purchase gasoline at pharmacies, and manually repair several malfunctions herself. For this, an annual antique auto rally called the Bertha Benz Memorial Route is now held annually in her honor. Her experience led to Benz adding gears for climbing hills and brake pads.

Later Years and Retirement
In 1893, there were 1,200 Benz Velos produced, making it the world's first inexpensive, mass-produced car. It participated in the world's first automobile race in 1894, finishing in 14th place. Benz also designed the first truck in 1895 and the first motor bus. He patented the boxer flat engine design in 1896.

In 1903, Benz retired from Benz & Company. He served as a member of the supervisory board of Daimler-Benz AG from 1926 until his death. Together, Bertha and Karl had five children. Karl Benz passed away in 1929." 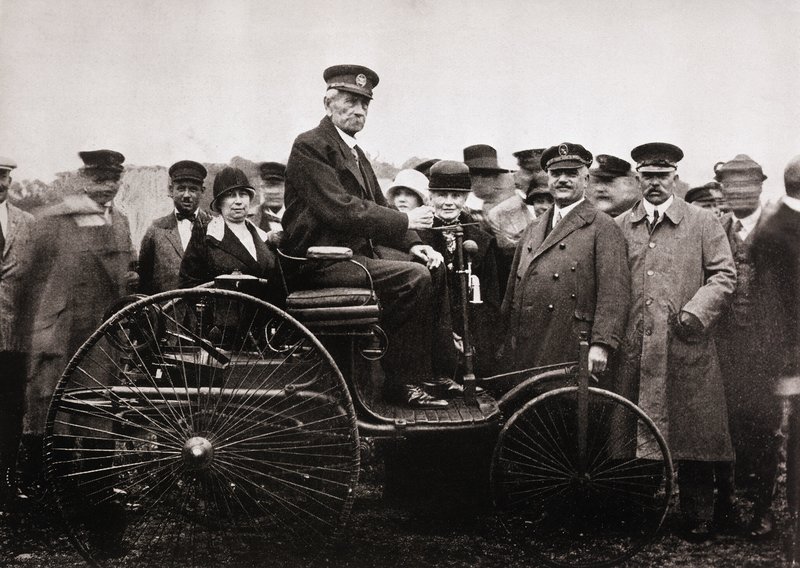