Carter was one of six Congressional Medal of Honor recipients who spoke at a town hall event at the Wal-Mart Home Office on Thursday. 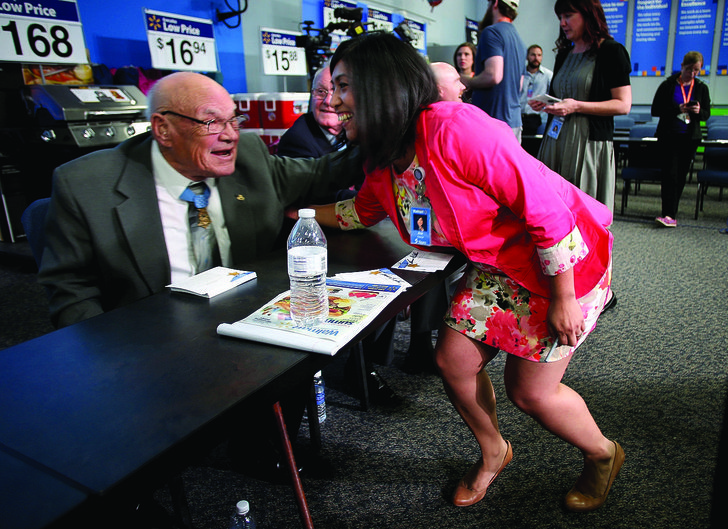 PFC Robert Falk
Posted >1 y ago
If two lawmakers get their way, the nation's greatest living war heroes will get a little extra cash in their pockets.
U.S. Rep. David Jolly of Florida and U.S. Sen. Lindsey Graham of South Carolina, both Republicans, have introduced identical bills in the House of Representatives and Senate, respectively.
Jolly and Graham are hoping to increase the monthly stipend given to recipients of the nation's highest military award for valor, the Medal of Honor.
If approved, the bills would boost the special pension from just over $1,000 to $3,000 a month.
The pension, paid in addition to any other military benefits the veteran may have earned, is one of several privileges or special benefits provided Medal of Honor recipients.
There are 78 living recipients, meaning such a change would cost the government somewhere close to $1.8 million, not much in the grand scheme of the federal budget.
"The acts of bravery, courage and valor demonstrated by this group of heroes who fought for our nation goes well above and beyond the call of duty," Jolly said. "This is one small way that we can repay a tremendous debt of gratitude for these individuals who have done so much while protecting our freedom."
Jolly said the increased funds will better enable the recipients to reach out to Americans, "representing the valor and honor of military service to hundreds of thousands of people by sharing their personal stories, dedication to serve and love of country."
Both bills are in their body's respective Veterans Affairs committee.
(0)
Comment
(0)
Read This Next
RallyPoint Home