MAJ Montgomery Granger
2.64K
4
2
3
3
0
I am not surprised at the demise of Rear Adm. John Ring, former commander of JTF GTMO, the command that oversees the incarceration mission at the US military detention facility at Guantanamo Bay, Cuba. He and a long line of ill-suited officers have come and gone in that role, beginning with BG Michael Lehnert, USMC. Gen Lehnert famously helped stand up the current mission at Gitmo in early 2002, when my unit served there in the capacity of Joint Detainee Operations Group, the controlling unit of the detention camp. Gen Lehnert famously handed out candy to each detainee on his last day as commander and before the detainees were moved to Camp Delta from spartan Camp X-Ray in April 2002. Lesson Learned should have been to never put someone in command of an operation they know nothing about.
ONLY the US Army trains and maintains enemy prisoner of war units. Not the Navy, not the Marines, not the Air Force or Coast Guard. Prior to the mission standing up in January 2002, a member of the 800th MP Brigade, US Army Reserve, which was full of experienced Military Police incarceration experts from the First Gulf War, was humored when invited to participate in the planning for the mission at Guantanamo Bay. Everyone else at the table, with zero military enemy prisoner of war incarceration experience, apparently knew better. The result was a tasking that was way too difficult and unnecessary, and cost a lot of potential and real problems that could have been avoided had a real professional EPW officer been in charge. We ran the camp at Gitmo, but the procedures and processes in place were NOT SOP, or even Field Manual regulated, a chain-of-command that was more about being afraid of messing up than they were about working smart instead of hard made.
Now, with the appointment of BG John F. Hussey, there is a chance the mission will be by the book. I served with John Hussey in Iraq, and trained along side his unit then, the 306th Military Police Battalion at Ft. Dix, NJ, where he was known as a "hard ass." He made his soldiers wear full battle-rattle at Ft. Dix, 24/7/365. Being a Medical Service officer whose brigade motto is "To Conserve Fighting Strength," I felt the then Major Hussey was being too strict on the troops. But it was not my place to intervene. I felt the harshness of this edict caused unnecessary stress and strain on people who were already stressed and strained about a pending 14 month deployment to a war zone. But the word was he wanted to prepare them for life in that combat zone.
John was a do as I do leader. He did everything he asked his troops to do, never wavering from practicing what he preached. When we got to Iraq and to Abu Ghraib Prison, which just several months before had suffered an abuse scandal, John was all business. I did a camp inspection and found horrid conditions, including "showers" for detainees that were no more than 3' high spigots in the open on a concrete slab with only cold running water. There were ortable toilets in western style, filthy and in disrepair (Arabs squat to defecate, and so they would squat on flimsy toilet seats, which would break, and the detainees would "miss" to hole). Detainees would ignore the hand wash stations outside the portable toilets in favor of washing their left hands from their drinking water bottles, completely ignoring the toilet tissue provided. Tents were in disrepair. Medicine call saw thousands of dollars of medicine discarded daily because of cultural & internal political reasons, and fear of western medicines. Detainees would rarely take the whole prescription cycle, and instead would take the pills until they felt better, and then stop. This created repeat issues. The SOP for feeding detainees allowed for $14 per day per detainee to be spent in the local economy for food equivalent to what a typical Iraqi would consume. After inspection and investigation, I found that only $7 per detainee per day was actually being spent on the thin and barely nutritious fare they were being served. When I brought this to the then promoted LTC John Hussey, he was more interested in whether or not I had saluted someone who identified themselves as an Iraq General of Saddam Hussein's during one of my camp tours. I told him I hadn't, but apparently someone in the camp thought that I had, and reported it to him. I remember waving at the general in maybe a half salute, remembering at the last moment that incarcerated enemy officers were not to be saluted. In retrospect, I could see how someone could think I could be rendering military courtesy that was not allowed. LTC Hussey was not interested in making things better for the detainees, and told me so. He said he was more concerned with his soldiers.
After Iraq, John Hussey's career took off, as he eventually earned several masters degrees in professional military disciplines. His official bio from the command page of the JTF GTMO website (search JTF dot GTMO dot SOUTHCOM dot MIL) can give you the details. He is indeed an accomplished military leader.

John Hussey is a hard man. He is an expert. He is by-the-book. He is experienced in enemy prisoner of war operations. He will run a tight ship and a right ship.
What occurred to me this morning when I found out that John Hussey was chosen to be the new commander at Gitmo was that someone in the Trump administration has been woken up to the fact that what is necessary at Gitmo is someone who knows what they are doing. In the past it seems they have stuck just any old person at the helm. Remember, no branch of the military produces professional enemy prisoner of war officers except for the Army Military Police, John Hussey’s background. Many of these professionals were Reservists prior to 9/11 because when there is no war, you don't need a lot of Active Duty MP EPW units, or medical units, transportation units.
It also occurred to me that there may be a REASON beyond just getting someone competent in there to take over for someone who may be incompetent. It may be because there are big plans for Gitmo that would require the services of perhaps the very best candidate for the job.
My personal feelings about John Hussey aside, he is probably the perfect fit from the Military Police and SOUTHCOM point of view.
John Hussey probably tests at the genius level. He is as academic as he is practical, and he is all about the rules.
I wonder what is coming? 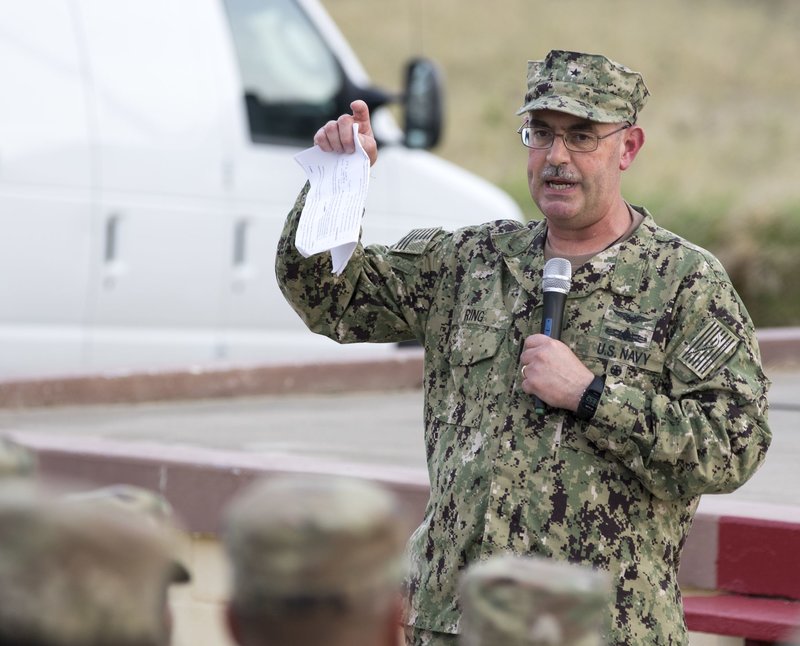 Posted from washingtontimes.com
Posted in these groups:

Bill Purkins
Posted 2 y ago
Maj. Granger...
Brilliant commentary, and I thank you for both it and your sevice. Just as you say we need more like BG Hussey? We also need even more like you. It's an honor to know you.
Best regards,
Bill Purkins
(1)
Comment
(0)