SGT (Join to see)
1.2K
27
7
11
11
0
On March 19, 1863, the Confederate cruiser SS Georgiana was destroyed on her maiden voyage with a cargo of munitions and medicines then valued at over $1,000,000. The wreck was discovered exactly 102 years later by teenage diver and pioneer underwater archaeologist E. Lee Spence. From the article:

"On March 19th, 1863, the SS Georgiana, said to have been the most powerful Confederate cruiser, is destroyed on her maiden voyage with a cargo of munitions, medicines and merchandise then valued at over $1,000,000.

The Georgiana was a steamer belonging to the Confederate States Navy during the American Civil War. Reputed to be the “most powerful” cruiser in the Confederate fleet, she was never used in battle. On her maiden voyage from Scotland, where she was built, she encountered Union Navy ships engaged in a blockade of Charleston, South Carolina, and was heavily damaged before being scuttled by her captain. The wreck was discovered in 1965 and lies in the shallow waters of Charleston’s harbor.

Due to the secrecy surrounding the vessel’s construction, loading and sailing, there has been much speculation about her intended role, whether as a cruiser, merchantman, or privateer.

Georgiana was a brig-rigged, iron hulled, propeller steamer of 120 horsepower (89 kW) with a jib and two heavily raked masts, hull and stack painted black. Her clipper bow sported the figurehead of a “demi-woman”. Georgiana was reportedly pierced for fourteen guns and could carry more than four hundred tons of cargo. She was built by the Lawrie shipyard at Glasgow – perhaps under subcontract from Lairds of Birkenhead (Liverpool) – and registered at that port in December 1862 as belonging to N. Matheson’s Clyde service. The U.S. Consul at Tenerife was rightly apprehensive of her as being “evidently a very swift vessel.”

Captain Thomas Turner, station commodore, reported to Admiral S. F. du Pont that Georgiana was evidently “sent into Charleston to receive her officers, to be fitted out as a cruiser there. She had 140 men on board, with an armament of guns and gun carriages in her hold, commanded by a British naval retired officer.”

The Georgiana was lost on the night of March 19th, 1863, while attempting to run past the Federal Blockading Squadron and into Charleston, South Carolina. She had been spotted by the armed U.S. Yacht America (of the famed America’s Cup racing trophy) which alerted the remainder of the blockade fleet by shooting up colored signal flares. The Georgiana was sunk after a desperate chase in which she came so close to the big guns aboard the USS Wissahickon that her crew even heard the orders being given on the U.S. vessel. With solid shot passing entirely though her hull, her propeller and rudder damaged, and with no hope for escape, Capt. A. B. Davidson flashed a white light in token of surrender, thus gaining time to beach his ship in fourteen feet (4.3 m) of water, three-quarters of a mile (1200 m) from shore and, after first scuttling her, escaped on the land side with all hands; this was construed as “the most consummate treachery” by the disappointed blockading crew, who would have shared in the proceeds from the prize.

Lt. Comdr. John L. Davis, commanding Wissahickon decided to set the wreck afire lest guerrilla bands from shore try to salvage her or her cargo: she burned for several days accompanied by large black powder explosions." 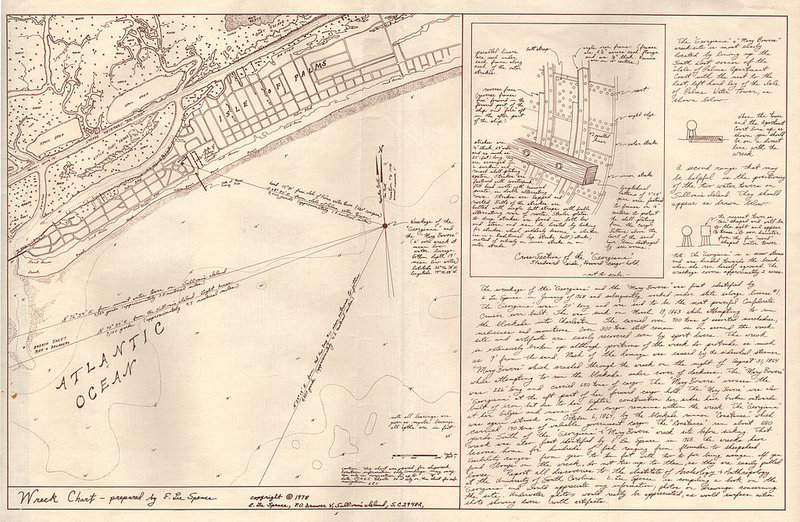 Posted from thepandorasociety.com
Posted in these groups: