SGT (Join to see)
3.08K
100
13
29
29
0
On June 10, 1944, Nazi forces carried out a massacre of 642 civilians in the French village Oradour-sur-Glane. "Oradour now serves as a symbol of national remembrance to the atrocities the French faced under Nazi oppression." From the article:

"Before the war, Oradour-sur-Glane was a quiet, rural community in central France. In 1944, the village was left in ruins after German Waffen-SS troops massacred 642 men, women, and children before burning the village to the ground. Today, tourists can visit the old town of Oradour where crumbling walls, cars, and other household items have been left untouched for the last 74 years. The ruins of this village serve as a reminder of Nazi atrocities suffered by not only the French but also other civilian populations who came face-to-face with Nazi oppression.

The group responsible for the heinous crimes committed at Oradour was the Der Führer regiment, a branch of the 2nd SS Panzer Division Das Reich. Das Reich arrived in France as a reserve unit in January 1944 after spending two years on the Eastern Front, where they engaged in combat and were responsible for putting down Soviet partisan resistance. Das Reich was under the command of SS-Obergruppenführer (Major General) Heinz Bernhard Lammerding. During his time on the Eastern Front, Lammerding ordered several retaliations against Soviet citizens for real or perceived partisan actions. These retaliations involved the murder of tens of thousands of Soviet civilians along with the torching of numerous villages.

Following the June 6 Allied invasion in Normandy, Das Reich was assigned a new mission to support German forces fighting in northern France. The Division also received orders to put down any maquis (guerilla bands of French Resistance fighters) while simultaneously intimidating the population and reasserting German control over central and southern France. Once orders were received, the Division began to move north towards Normandy.

On the morning of June 10, 1944, only four days after D-Day, the citizens of Oradour woke to what they assumed would be another normal day. During the war, Oradour had not seen much action and townspeople saw few Germans passing through the city. Around 2 p.m., under the command of SS-Sturmbannführer (Major) Adolf Diekmann, somewhere between 120 and 200 soldiers of the Panzer regiment Der Führer encircled the town blocking all entrances and exits. The town crier was sent to relay the message that all citizens, including the sick and elderly, were to report to the town market center. Armored cars gathered citizens who were out working in the fields and within an hour the Germans had rounded up every villager they could find in the market center. Most citizens were at first unconcerned, believing the Germans had arrived for a routine identification check. It was not long before the citizens realized that nothing about the exercise was routine.

First, SS troops separated the men from the women and children. An officer announced to the men that he knew of hidden weapons and ammunition supplies, and that whoever was hiding them must step forward immediately. This charge was unsubstantiated, as no one in Oradour was known to have taken part in resistance activity. When nothing came of the demand for arms, the 197 men were divided into groups and forced into six separate barns located throughout the village. When a signal was given, the SS men opened fire with machine guns, murdering the men lined up before them. There were 240 women and 205 children that were forced into the village church. Once locked inside, the troops first threw in grenades, injuring some while suffocating others with smoke. Panic ensued within, and the SS then set fire to the building while shooting anyone who attempted to escape. After setting fire to the church, the Germans searched for and killed anyone left hiding in the village and continued on by burning the rest of Oradour to the ground. Only seven people survived the massacre – five men who were protected by fallen bodies, a woman who had escaped through a window of the church, and a child who had managed to escape before the Der Führer regiment began rounding up the townspeople. It is through the survivors’ testimonies that historians were able to piece together the events that occurred in the town. Madame Marguerite Rouffanche, the sole survivor from the church, spent over a year recovering from her injuries. After jumping from the church window, she was shot five times before crawling into a garden where she hid until she was rescued the following afternoon. Madame Rouffanche gave her testimony at the Bordeaux trial in 1953, where she recounted the events she witnessed on June 10, 1944.

The reason for the German attack on Oradour remains unknown. After the incident, the German high command released an explanation stating insurgents had attacked the Division, resulting in fighting which killed the civilians. A common explanation was that Lammerding received word the villagers were assisting the resistance by aiding with the kidnapping of SS-Sturmbannführer (Major) Helmut Kämpfe, a decorated Nazi officer who was assassinated by the French Resistance. This is contradictory to the survivors’ testimonies that stated Oradour was in no way involved with the Resistance. Some historians believe the Oradour massacre was in response to Kämpfe’s assassination, while others believe that Oradour was just an unfortunate stop the Division made on the way to Normandy. A majority of the SS men involved never stood trial, as many died in the battles following D-Day. Among these deaths was SS-Sturmbannführer (Major) Adolf Diekmann, the man who headed the massacre and had made the claim that Oradour was responsible for the death of Kämpfe. Additionally, German authorities refused to extradite SS-Obergruppenführer (Major General) Lammerding to France, though he had been sentenced to death by the Bordeaux court in 1953. Lammerding had been tried for war crimes in Germany and had already served a prison sentence. Under the Bonn Constitution, he was not subject for extradition. Lammerding died in West Germany in 1971.

What makes Oradour so unique in Europe are the ruins of the village that stand today just as they were left in 1944. Oradour now serves as a symbol of national remembrance to the atrocities the French faced under Nazi oppression. Dr. Pierre Masfrand, president of the Remembrance Committee of Oradour and author of Oradour-sur-Glane: A Vision of Horror, was the first to propose rebuilding the town of Oradour nearby and preserving the village ruins as a monument. Masfrand’s idea was to re-create and freeze such a violent moment in time while using the physical remains of the village as a permanent commemoration of the massacre. In 1946, French President Charles de Gaulle announced that the site would be preserved and the ruins were to become a national memorial. A small remembrance center and exhibit were built to display items left behind in the ruins, most of which were damaged by bullet holes and fire. Today, the ruins are maintained by the Ministry of Culture. They span about 40 acres and receive about 300,000 visitors a year.

The ruins of Oradour-sur-Glane are prominent in the French national memory of World War II. It is indeed a village frozen in time, recounting the horrors of the Nazi regime. Comparable to the outcome of the Czechoslovakian town of Lidice, Oradour also brings attention to other villages throughout Europe that suffered a similar fate at the hands of the German SS. Preserving a site such as this one allows for future generations to remember and experience the war as it occurred in 1944. The story of Oradour and its ruins have sense served as the prime example of French suffering under German occupation.

“Today, those who make the journey to the ruins of Oradour see a landscape and hear a commemorative narrative telling of the ideal French village which, through no fault of its own, became the target of Nazi barbarism.”
-Sarah Farmer, author of Martyred Village: Commemorating the Massacre at Oradour-sur-Glane. " 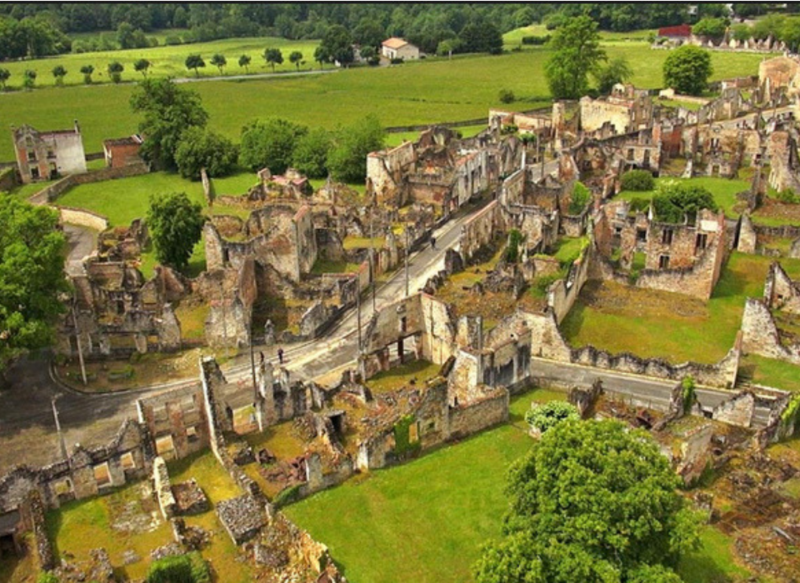 Lt Col Charlie Brown
Posted >1 y ago
Excellent share. The behavior of both the Nazis and the Japanese to civilians in occupied countries was abominable.
(11)
Comment
(0)