With more than 6,000 troops standing by as the storm headed toward Jacksonville, Florida, defense officials said it is the largest domestic military operation since Hurricane Sandy four years ago.

Meanwhile, about 250 active-duty service members were on the ground in Haiti on Friday preparing to begin humanitarian support operations for the island nation that was devastated by the storm as it passed through the Caribbean Sea earlier this week, defense officials said.

In Florida, about 3,500 National Guardsman were on duty, many of them deployed in search-and-rescue teams with helicopters and high-wheeled vehicles to support residents who were stranded by the storm.

“The guardsman will come in with search-and-rescue capability as the storm progresses throughout the day,” Witham said.

Beyond Florida, which is sustaining significant wind damage, the primary concern in Georgia and the Carolinas is rain and flooding.

“We’re actually preparing ... to support our governors mostly for a flooding event as you move further north rather than a wind event,” he said.

In South Carolina, about 2,500 guardsman were preparing for the storm as well as about 360 in Georgia. The governors of those states could increases the number of troops depending on the path of the storm and demand for support.

Several hundred reservists from North Carolina were standing by; if the storm’s impact does not require a major response in North Carolina, those troops can be deployed to the other southern states.

“North Carolina guardsman could be use in south Carolina or other adversely impacted states,” Witham said.

For now, the U.S-based response is a reserve component mission; no active-component military forces have been involved, Witham said.

Outside the United States, a U.S. Marine Corps unit was diverted from a mission in Honduras and deployed to Haiti along with nine helicopters to support relief operations, said Navy Rear Adm. Cedric Pringle, the commander of Joint Task Force Matthew, which is overseeing operations in Haiti.
The storm sent more than 300,000 Haitians into temporary shelters across the country and cut off large pockets of southeastern Haiti from the rest of the country, official said.

U.S. military aircraft conducted surveillance flights on Friday to assess the scope of the mission in Haiti and search and rescue operations were expected to begin late Friday, Pringle said.

The Navy on Friday dispatched the amphibious transport dock Mesa Verde from its homeport in Norfolk, Virginia, down to the Caribbean to support operations in Haiti, a defense official said.

A total of 350 U.S. troops are expected to be on the ground in Haiti by Saturday, Pringle said. 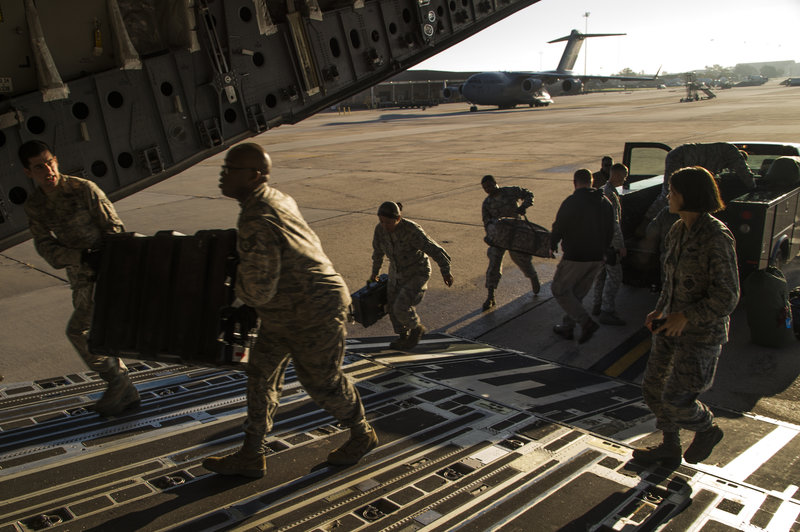 Posted from militarytimes.com
Posted in these groups: USARNG
Posted >1 y ago
Responses: 2

SGT David A. 'Cowboy' Groth
Posted >1 y ago
Thank you for mentioning the Florida National Guard, they're doing what they were trained to for just such a time.
(2)
Comment
(0)

LTC Stephen F.
Posted >1 y ago
Thanks for letting us know that US National Guard soldiers in Florida began initial search-and-rescue operations Friday in the southern parts of the state as Hurricane Matthew moved up the East Coast toward Georgia and South Carolina SFC Joe S. Davis Jr., MSM, DSL.
I am glad that National Guard soldiers are supporting state rescue and law enforcement efforts in their sates after years of deploying overseas.
I am also glad to learn that South Carolina activated 2,500 Guard troops as of Friday and Georgia activated were activated between 360 and 500. Troops in those states aided in evacuation efforts and were bolstering law enforcement ahead of the storm's impact.
(1)
Comment
(0)
Read This Next
RallyPoint Home