NHL CEO on West Point, Wall Street and military know-how in the workplace

Matthew Caldwell’s career path hasn’t been particularly traditional, but the former Army officer has found a professional home with the NHL’s Florida Panthers, where he was named president and chief executive officer in April. And he’s not the only U.S. Military Academy grad on the club’s organizational chart. Owner Vincent Viola, USMA Class of 1977, bought the team in 2013, a year before his first appearance on Forbes magazine’s list of the world’s 400 wealthiest people.

The Army influence isn’t far from the surface — the Panthers will play a preseason game at West Point this year and visited the academy for a team-building exercise in 2015. New uniforms — unveiled June 2, the day before Caldwell spoke with Military Times — include a logo that resembles a unit patch and a special shoulder tab for the team captain.

Caldwell connected with Viola while at Goldman Sachs, eventually serving the Panthers as chief operating officer. Before that, he earned business and law degrees. Before that, he spent time leading soldiers in Iraq and Kosovo, after becoming a member of the first West Point class to graduate after the 2001 terrorist attacks.
Caldwell spoke about his personal and professional milestones and how current and transitioning service members can find successful paths in the corporate world in this wide-ranging interview, edited for brevity and clarity.

Q. You were at the U.S. Military Academy during 9/11. How did that affect your outlook, and what was it like to be at West Point during that period?

A. It made everything so real. As much as you prepare for combat, you go through your four years of training, you get ready for the possibility of war. We were the first class to graduate into the war. We instantly knew the country was going to war. We didn’t know when or where, but we knew there was no way there was going to be a terrorist attack like this and we weren’t going to respond. … It just brought everything to the forefront so quickly. I remember on the following day, Sept. 12, Gen. Barry McCaffrey, who was a professor at the school, a retired four-star general, took a number of seniors into a room and said, “Hey, you better start getting your mindset ready.” Not that he had any inside information at the time, but he said that you should prepare for a war. It was really surreal. It brought reality to the forefront.
Q. What drew you to West Point in the first place?

A. I didn’t have a family connection. I went to a high school in Staten Island, where the principal was a big proponent of the service academies. He kind of put it in my head. … I was a little bit more interested in the total package that West Point offered, and the military was kind of a means to get that total package. I wasn’t in the camp where I wanted to be a military officer first. It was more, “This is an interesting opportunity to get a number of things.” Now, once I got there, I really fell in love with the Army. … When I got out in five years, it was probably the toughest decision I ever made. I enjoyed it. I felt like I had a sense of purpose.

Q. What were your duties in Iraq?

A. I was an armor officer [with 3rd Brigade Combat Team, 1st Armored Division] in Baqubah, about 30 miles north of Baghdad. We were doing patrol missions, kind of building relationships with the locals and at the same time trying to root out insurgents. About halfway through the deployment, I got promoted to the scout platoon. … A little more high-speed, house raids, more focused on catching folks who gave us a lot of trouble in the sector.

Q. What led you, ultimately, to decide that after five years, it was time to get out?

A. My first three years, I more or less spent two, two-and-a-half of those years either in combat or training for it, or coming back from it. When you come back to garrison, it’s hard to take anything else as serious [as deployment]. But you know that deploying every year is unsustainable. … I knew the next goal in my life was to go to graduate school. It was always something that was on my mind. I knew that the Army was great and West Point was great. It opened up some doors. I wanted to have some flexibility around my next step, and graduate school was important to me.

Q. What from your Army service helped you adjust to the academic environment?

A. Of course, discipline and hard work. All that. But the one thing the Army taught me was being comfortable in my own surroundings. I don’t think people appreciate that you’re thrown into a platoon, 40 men, all different shapes and sizes, ethnicities, backgrounds, you just get comfortable dealing with uncertainty. And then being in Iraq, you’re given a mission that’s very difficult — it’s actually very entrepreneurial. I don’t think people appreciate that. A place like Northwestern [where Caldwell received both law and business degrees], you have all these guys from different industries, they are exceptionally bright, you can be intimidated if you aren’t comfortable in that uncertain environment. I was able to go in and feel very confident in myself and not feel threatened by how well they’d done.

A. It’s really simple — remove the emotion out of it. You fought for people to have their opinions. Thank God they can have their opinions. They weren’t over there, they don’t know the truth, but you don’t need to rectify that, you don’t need to change it. You can voice your opinion, but you’ll, ultimately, get enraged. You’ll get upset, the more you think about how they think about the world. You have to remove yourself from that, emotionally. It’s easier said than done.

Q. How did you make your leadership skills from the Army work for you?

A. When I got out of grad school, I went to Goldman Sachs … it’s a hyper-competitive place. Selling somebody a product is very difficult in general, and a lot of people think that in the Army, you’re not doing much selling. However, a big component of sales is building trust. What I quickly realized is that instead of becoming a typical salesman — being really charismatic, knowing all about the product, being able to explain the details, all this — I just moved toward building relationships with people. If they trust you, then they’re more willing to listen. If you’re a sales person, and you don’t know all the answers but they trust you, they’ll trust that you’re going to find them. Ultimately, I got that from the Army, because when I was in Iraq, I met with all the sheikhs and mayors and built trust with them. When I walked in, they thought I was just another American GI, but over the course of a month, they thought, “We can work with him. We can give him information.” That really transferred over when I was on Wall Street.

Q. When it comes to leading an office, what are some things you’ve been able to use that you first picked up in an Army environment?

A. We created a very open style, almost a trading floor [with the Panthers]. A lot of the tech companies — Google, Apple — do that, too. It fosters a teamwork environment. Wall Street believes in that, and Wall Street got it [from the military]. It may not seem obvious, but the big banks love the military. The hard work, the team atmosphere, a big part of their open-style trading platform comes from the teamwork style of the Army. … We’ve created this unbelievable team culture. Everyone can help each other out. We have a motto: Everybody sells. We all represent the brand. We all talk about the brand.

Q. What’s your advice as a manager for former service members seeking jobs?

A. Do not be humble. I think the biggest thing people in the military struggle with is, the Army gets it in your head that you should be very reserved, give credit to your team, and don’t pound your chest. You almost have to remove that. You have to brag a bit. Take that humble hat off, because a lot of people in the civilian world don’t really understand the military. Unless you really let yourself talk about it, open up and kind of market yourself, people aren’t really going to get it.

Q. Any other interview advice?

A. When you sit down for a job interview, the employer is asking themselves if the person can do the job they’re after. If you want that job, you’ve got to find out what specific skills they’re looking for. Let’s say you’re applying for an accounting job. You may think off the bat, “Closing the books, finding out whether things are booked as revenues or credits or expenses, I don’t know that off the top of my head.” … Even though a military candidate might not know what a debit or a credit is, if they can think about some examples that showed their attention to detail, showed that they did some real tough inventory analysis of their equipment, for instance — they can back themselves into it. They have a lot of those stories. They have all those skills — it’s just a matter of learning the craft. Once they learn what a debit and credit is, they’re going to be fine. You get overwhelmed by the specifics of the tasks.

Q. What’s your advice for service members adapting to a civilian office culture?

A. When I first started at Goldman Sachs, I show up and I’ve got the baggy shirts, the baggy suits, I didn’t quite know how you’re supposed to dress. And I look to my left and right and there’s guys with everything groomed. Custom shirts, the perfect ties. They spent more money on their shoes than I did on my suit, you know? That was a rude awakening. I was not, from a superficial standpoint, fitting in here. This is where you have to be humble. You have to adapt to the environment. Tell yourself, “I’ve excelled in other environments, there’s no reason I can’t excel in this one.” I went out, sucked it up, went to a nice tailor. … Anywhere soldiers show up [after service], it’s going to be different. It’s OK to be uncomfortable. 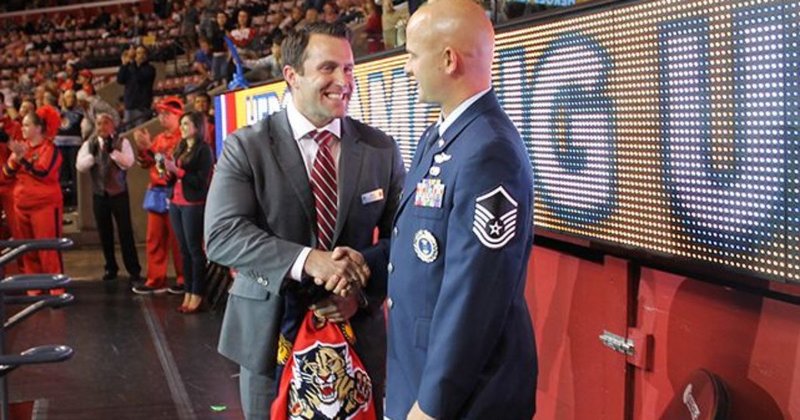 NHL CEO on West Point, Wall Street and military know-how in the workplace

LTC Stephen F.
Posted 5 y ago
Thanks for sharing SFC (Join to see) and highlighting how West Point and Army service contributed so heavily to Matthew Caldwell’s career path to become the president and chief executive officer with the NHL’s Florida Panthers in April.
(1)
Comment
(0)