Preparations for the Final Solution begin

Lt Col Charlie Brown
1.88K
68
18
15
15
0
https://www.history.com/this-day-in-history/goering-orders-heydrich-to-prepare-for-the-final-solution?cmpid=email-hist-tdih-2021-0 [login to see] 1&om_rid=
On July 31, 1941, Hermann Göring, writing under instructions from Hitler, ordered Reinhard Heydrich, SS general and Heinrich Himmler’s number-two man, “to submit to me as soon as possible a general plan of the administrative material and financial measures necessary for carrying out the desired final solution of the Jewish question.”

Goering recounted briefly the outline for that “final solution” that had been drawn up on January 24, 1939: “emigration and evacuation in the best possible way.” This program of what would become mass, systematic extermination was to encompass “all the territories of Europe under German occupation.”

Heydrich already had some experience with organizing such a plan, having reintroduced the cruel medieval concept of the ghetto in Warsaw after the German occupation of Poland. Jews were crammed into cramped walled areas of major cities and held as prisoners, as their property was confiscated and given to either local Germans or non-Jewish Polish peasants.

Behind this horrendous scheme, carried out month by month, country by country, was Hitler, whose “greatest weakness was found in the vast numbers of oppressed peoples who hated [him] and the immoral ways of his government.” This assessment was Soviet dictator Joseph Stalin’s, given at a Kremlin meeting that same day, July 31, with American adviser to the president Harry Hopkins.

Preparations for the Final Solution begin

SSG Samuel Kermon
Posted 1 y ago
And so the "Final Solution" to the Jewish population was created. He was supposed to hang but Goering got an easier death than he deserved.
(7)
Comment
(0)

SGT Steve McFarland
Posted 1 y ago
Is Amerika next?
(7)
Comment
(0)

SGT Mary G.
1 y
LTC Marc King - Sadly, we really do need to be concerned. People become more fully aware of the extent of the horrors perpetrated by the Nazi machine during the Trials at Nuremberg. That would mean that our parents became aware when some of us were very young and while we were growing up. The trials certainly must have had a shocking impact on people everywhere. WWII remained close to the surface for all of us.
All these years later, I continue to experience it as a doubly bitter disappointment when nations signatory to the Geneva Conventions violate them.
(0)
Reply
(0)

SSG (Join to see)
1 y
sir, for me its just sad. The free expression of ideas is the only way to combat BAD ideas. I participate in places on the web that have ZERO RULES regarding what is posted, therefore EVERY idea, concept, ideology and event has to be articulately defended with facts. Even then, most dont hold up. It is only when the unvarnished truth remains that an idea survives. In these places knee jerk reactions are laughed at and positions are defended with the cold hard truth.
Why does that matter? Because when you force an idea underground, it doesnt have to be defended, and in fact it grows stronger through being banned. It becomes credible by being banned.
Flat Earth for example. Most on here will laugh at the very idea. But that idea is growing because it is ignored and banned, the ones that push it thrive on the bans. The "they are affraid of the truth" adds fuel to the fire and there is no one to point out, ships dip below the horozon and all planets we can see are round.
The unvarnished truth is the only thing that matters.
(2)
Reply
(0) 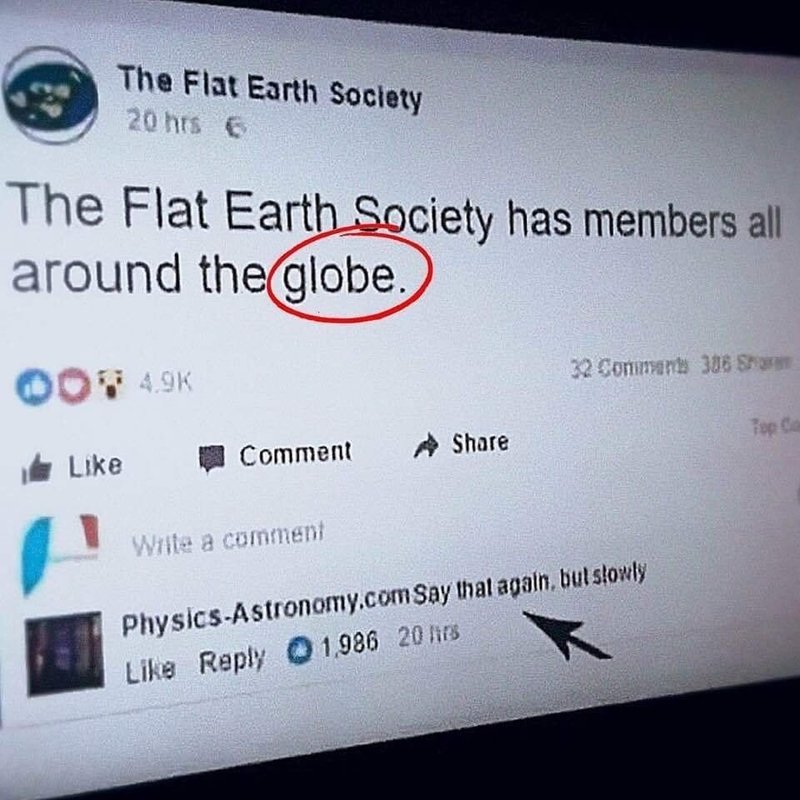 SSG (Join to see) - Given your example, thought this meme from a science humor group might be amusing.
(2)
Reply
(0)