He was wounded 14 times over 54 months of combat, was awarded the Medal of Honor, eight Purple Hearts, a Distinguished Service Cross,[a] a Silver Star, and four Bronze Stars.

He was nominated for the Medal of Honor three separate times over a 13-month period but received lesser medals for the first two nominations, which were for actions performed in Cambodia where the U.S. was fighting covertly. He was awarded the Medal of Honor for his actions on December 30, 1968, his third nomination.

He retired from the US Army after 36 years of service as a full colonel, and the most highly decorated service member on active duty.[2]

He died as a result of pancreatic cancer, and was buried at Arlington National Cemetery on February 22, 2010.

Before his death he was the most decorated living Medal of Honor recipient.[3]

Howard enlisted in the Army in 1956 at Montgomery, Alabama and retired as colonel, Army Special Forces, in 1992.

As a staff sergeant of the highly classified Military Assistance Command, Vietnam – Studies and Observations Group (MACV-SOG), Howard was recommended for the Medal of Honor on three separate occasions for three individual actions during thirteen months spanning 1967–1968. The first two nominations were downgraded to a Silver Star and the Distinguished Service Cross due to the covert and top secret nature of the operations in which Howard participated.

As a sergeant first class of the SOG, he risked his life during a rescue mission in Cambodia on December 30, 1968, while second in command of a platoon-sized Hatchet Force that was searching for missing American soldier Robert Scherdin for which he was awarded the Medal of Honor. He learned of the award over a two-way radio while under enemy fire, immediately after being wounded, resulting in one of his eight Purple Hearts.[4]

Howard was wounded 14 times during a 54-month period in the Vietnam War. For his distinguished service, Howard received a direct appointment from Master Sergeant to First Lieutenant in December 1969.

Howard graduated from Ranger School class 7-73 in May 1973 and served with the 2nd Ranger Battalion at Fort Lewis, Washington as Company Commander. From 1977-1978 he served as Mountain Ranger Training instructor.

According to NBC News, Howard may have been the most highly decorated American soldier of the modern era.

His residence was in Texas and he spent much of his free time working with veterans until the time of his death. He also took periodic trips to Iraq to visit active duty troops.[6]

Howard died of pancreatic cancer at a hospital in Waco, Texas on December 23, 2009. He was survived by four children and five grandchildren.[5][7]

For conspicuous gallantry and intrepidity in action at the risk of his life above and beyond the call of duty. 1st Lt. Howard (then SFC .), distinguished himself while serving as platoon sergeant of an American-Vietnamese platoon which was on a mission to rescue a missing American soldier in enemy controlled territory in the Republic of Vietnam. The platoon had left its helicopter landing zone and was moving out on its mission when it was attacked by an estimated 2-company force. During the initial engagement, 1st Lt. Howard was wounded and his weapon destroyed by a grenade explosion. 1st Lt. Howard saw his platoon leader had been wounded seriously and was exposed to fire. Although unable to walk, and weaponless, 1st Lt. Howard unhesitatingly crawled through a hail of fire to retrieve his wounded leader. As 1st Lt. Howard was administering first aid and removing the officer's equipment, an enemy bullet struck 1 of the ammunition pouches on the lieutenant's belt, detonating several magazines of ammunition. 1st Lt. Howard momentarily sought cover and then realizing that he must rejoin the platoon, which had been disorganized by the enemy attack, he again began dragging the seriously wounded officer toward the platoon area. Through his outstanding example of indomitable courage and bravery, 1st Lt. Howard was able to rally the platoon into an organized defense force. With complete disregard for his safety, 1st Lt. Howard crawled from position to position, administering first aid to the wounded, giving encouragement to the defenders and directing their fire on the encircling enemy. For 3​1⁄2 hours 1st Lt. Howard's small force and supporting aircraft successfully repulsed enemy attacks and finally were in sufficient control to permit the landing of rescue helicopters. 1st Lt. Howard personally supervised the loading of his men and did not leave the bullet-swept landing zone until all were aboard safely. 1st Lt. Howard's gallantry in action, his complete devotion to the welfare of his men at the risk of his life were in keeping with the highest traditions of the military service and reflect great credit on himself, his unit, and the U.S. Army.

The President of the United States of America, authorized by Act of Congress, July 9, 1918 (amended by act of July 25, 1963), takes pleasure in presenting the Distinguished Service Cross to Sergeant First Class Robert Lewis Howard (ASN: RA-14628152), United States Army, for extraordinary heroism in connection with military operations involving conflict with an armed hostile force in the Republic of Vietnam, while serving with Command and Control (Central), 5th Special Forces Group (Airborne), 1st Special Forces. Sergeant First Class Howard distinguished himself by exceptionally valorous actions on 21 November 1967, as Special Forces Advisor to a joint American and Vietnamese reconnaissance patrol conducting a search mission near the Laotian border. His patrol discovered a huge rice and ammunition cache surrounded by an enemy bunker complex. Sergeant Howard led a small team to provide security while the remainder of the unit began to destroy the stored supplies. His team encountered four North Vietnamese Army soldiers, and Sergeant Howard killed them with a fierce burst of rifle fire. He and his men were immediately pinned down by a murderous curtain of fire which erupted from a nearby enemy machine gun position. With complete disregard for his safety, Sergeant Howard crawled toward the emplacement and killed a North Vietnamese sniper who was firing at him as he maneuvered. He then charged the bunker, eliminating its occupants with rifle fire. A second machine gun position unleashed a savage barrage. Sergeant Howard moved his troops to a covered location and directed an air strike against the fortified bunker. While assessing the bomb damage, Sergeant Howard was fired upon by North Vietnamese soldiers in the bunker who had survived the blasts. Pinned down directly outside the strongpoint with a blazing machine gun barrel only six inches above his head, he threw a hand grenade into the aperture of the emplacement, killing the gunners and temporarily silencing the weapon. He then dashed to his team's location and secured a light anti-tank weapon. As the enemy machine gun resumed firing, Sergeant Howard stood up amid a withering hail of bullets, fired his weapon, and completely demolished the position. His fearless and determined actions in close combat enabled the remainder of the patrol to destroy the enemy cache. Sergeant First Class Howard's extraordinary heroism and devotion to duty were in keeping with the highest traditions of the military service and reflect great credit upon himself, his unit, and the United States Army. 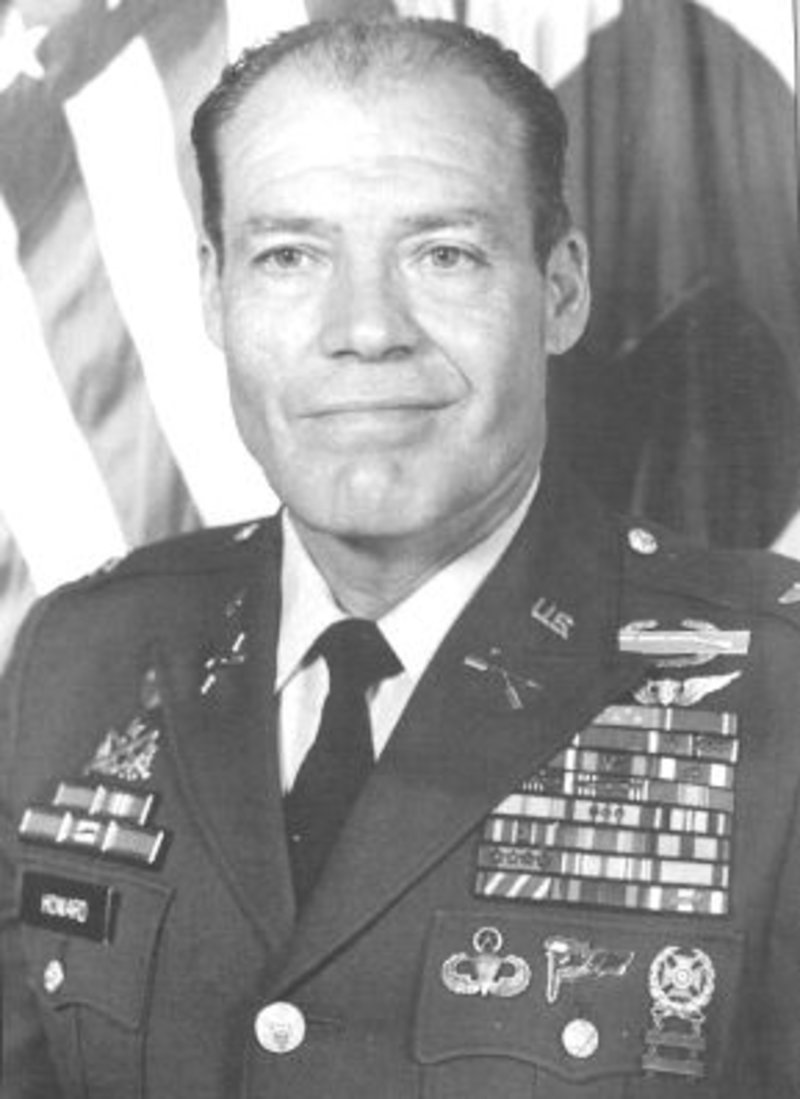