Statement from USSOCOM on SECDEF's Women in Service Review Decision

https://youtu.be/JgfmBANgBk8
RP Members what are your comments and thoughts about COL Anderson's article below?

A Changing Military
The role of women in the Armed Forces
December 14, 2015

A new day has dawned for a profession that has always been predominately a man’s domain—the United States Military.

As of December 7th Secretary of Defense Ashton Carter announced that “all roles in the military would now be available to women.” With this historic announcement an additional 220,000 were now open to females that had been previously open to men only.

With this announcement, the administration is trying to tell the military commanders that the days of the “Al Bundy” mind-set would be changing. But the question is, and remains; What will happen to the tight bonds that are formed in specialized units in the military, the Navy’s highly trained and mission oriented SEALs, Marine Force Recon, now Marine Raiders, the Army’s Ranger units, and the US Air Forces Para-Rescue units as women are allowed to volunteer and train alongside their male counterparts? Will there be any significant change?

Currently, about 15% of the military’s active duty force of approximately 1.3 million is female. And until December 7th, more than 220,000 roles remained closed to women. This included 21,000 that fell under special operations command, IE; Marine Critical Skills Operator, Navy SEALs, Army Rangers, etc. The reason I did not add the US Army’s Green Berets as they beat the announcement to the punch with its first female Green Beret, Katie Wilder. I guess in some ways, the Army does 'lead the way'.

Although established wisdom says that the special operations realm would in all likelihood be the most difficult for a female to break through the almost impenetrable ceiling of gender-based military job restrictions given the highly strenuous physical strength and endurance standards that are currently daunting even for a majority of men. It is not impossible and the current environment sets the conditions to verify the different schools of thought.

And although I am not completely opposed to a totally “integrated” military, I, as well as those in the military have to look at a number of key points here;

• At present, women serve on the front lines with small teams of special operations units, many attached as cultural support specialist and medical staff.
• In January, the US Army made the statement that it would allow the first woman to attempt ranger School in April, one of the most physical training programs a soldier can endure.
• Both South Korea and Israel train women to be part of covert special operations units.
• The CIA uses female operatives in it ranks and utilizes them internationally and in many theaters of operation.

A crucial point here would be to set the standards appropriately and let all citizens apply, in this way you would have a force that is not only diverse, but strong. The varied skill sets that would be brought to the table, so to speak, would be invaluable.

Consider this, in 1976 the US Military Academies’ began admitting women. What happened was completely opposite to initial beliefs, the academic actually increased after female cadets were admitted in 1977.

In the international realm of armed forces, the USA would be among the last of our major allies to open all roles in their militaries to females. In fact, the Canadian armed forces were forced by a human-rights tribunal in 1989 to open all combat roles to women, followed by Australia in 2011, which began sending females to assignments in 2013.

However, there are a few very notable nations that still restrict women from the infantry, including Great Britain, Russia, and Pakistan.

In the USA, my old alma mater, the Marine Corps has the distinction of being the most male oriented of all the services with only 7.6% of its force composed of females and the most dominated by its all-male infantry. And remains today to be the most conservative in its cultural traditions.

As the Corps looks at unit cohesion as a very important factor as far as combat goes, in 2012 53,000 Marines took part in an anonymous online survey regarding the integration of females into its combat units. Approximately 17 percent male respondents and 4 percent of female respondents said they would likely leave the Corps if women were permitted to volunteer to combat units. This survey was reported by the Associated press. Although I find it interesting that 4 percent of female respondents would consider leaving the Marines if combat positions were opened to female Marines.

A point worth stating, and one reported by The Washington Times in January, “The failure of two Marine Corps female officers to pass the January 8 first-day combat Endurance test for the infantry officer course (IOC) brings the tally of female dropouts to 26. One more group of female officers will haves a shot at graduation before the Marine Corps completes its integration experiment in June. The next OIC program begins in April (2015)”

To be specific, the Corps experiment has gone 0-26. This figure would be costly for an NFL team, but is drastic for the Marines. Take in to account how many physically fit, young male Marine officers had to sit back and miss this all important training to allow these female in, only to have them fail? In fact, the IOC has a failure rate among its male officers of 11 – 15 percent as is.

A female in combat has the same ability to kill, and kill without prejudice that a male has, and this has been proven many times throughout history. Many females in combat situations have had to fight alongside their male counterparts, and have ended up dying alongside them.

Case in point; during the battle of Stalingrad in WWII, the Russian female snipers proved to be very effective in neutralizing their targets, and they did it very, very, effective manner. Private Pavlichenko fought for about two and a half months near Odessa where she recorded 187 kills. When the Romanians gained control of Odessa her unit was sent to Sevastopol on the Crimean Peninsula, where she fought for more than eight months. In May 1942, Lieutenant Pavlichenko was cited by the Southern Army Council for killing 257 German soldiers. Her total of confirmed kills during World War II was 309, including 36 enemy snipers.

If we are to allow females into combat roles, especially those of special operations units, they should and are expected, to be held to the same physical entry standards as the male volunteers are, and I also feel it might be beneficial to separate their training, IE; men with men, women with women. When training is finished, and they are ready to take on their place in special ops, placed in an intergration course to unite blended special ops teams. Yet placing both sexes in the same training module simultaneously, removes doubt from male team members as to the ability and adaptability of their female counterparts, then just stand back and watch the wrath as they are released on the enemy.

We are facing an enemy in the Mid-East where split-second decisions must be made in what some call the “25-meter war” which puts one in close combat with a vicious enemy whose 7th century ideology means no quarter for our troops. Female Special Ops members who have successfully navigated the prescribe menu of training courses to earn their respective designations, will have proven themselves well prepared to face an this vicious enemy that to date has not been degraded, ruined, and certainly not destroyed

So in closing let me reiterate, although I am of the “Old” Corps, I do feel that there is need for women in the military, this has been proven many times thought-out history, I am certain that the time has come for women to make their presence in a combat role, especially opportunities in special ops. 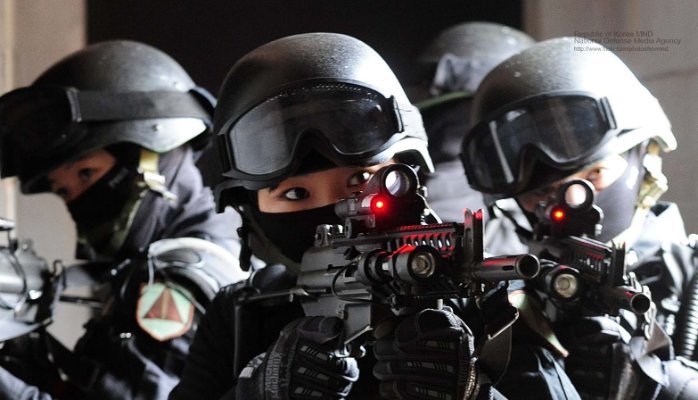 Women in the Military
Edited >1 y ago
Posted 6 y ago
Responses: 45

CPT Jack Durish
Posted 6 y ago
Women serving in front line combat roles, especially rigorous special operations will succeed until they don't. But the same can be said for men, can't it? The truth is that the mission of defending American is undergoing radical changes. While the Navy steams the ocean blue launching jets in search of a high tech version of WWII, terrorists are launching a new kind of warfare. While the Air Force patrols the skies insuring the sovereign borders of the nation, terrorists are seeping through our porous borders sometimes hidden among refugees, sometime in plain sight with valid visas. While our Army maneuvers with heavy tanks and artillery, terrorists plant IEDs and gun down civilians in schools, places of business, and even on military bases. It seems we need to make some changes, doesn't it? I can't help adding my amusement at the report of Kurdish women terrorizing terrorists who fear being killed by a woman. If true, we should send them a legion of our own. To be honest, I will admit that I was skeptical of the initial announcement by the Secretary of Defense just as I am skeptical of any decision by this Administration. However, I must remember that when you give an infinite number of monkeys an infinite number of decisions to make, they're bound to get at least one right. We'll just have to wait for the proof of this one, as we used to say, in the pudding...
(19)
Comment
(0)

SSgt Boyd Herrst
>1 y
I like your comment and I hope some person don't take "give an infinite number of monkeys an infinite number of decisions to make an they will eventually get one right" the wrong way and say you were equating women to monkeys..
There's bound to be one out there
On RP somewhere...(I hope not)
(4)
Reply
(0)

(Join to see)
>1 y
I am reminded of a friend in the CB's in Iraq, who's team was commanded by a woman Captain, who while leading her team on a final patrol without ammo, 'lost it' while coming under attack while returning to Base. Result, several dead & wounded but receiving a commendation !
On the other hand my personal observation in AFG of some very fine women soldiers who patrolled with the men were assets to their team !
Hard choices !!!
But, I am reminded of early tests when obama first issued this order. training was imposed on the women, NONE of them met the Standard imposed upon the male operators ! Which 'lie' are 'we' to believe ???
(2)
Reply
(0)

The arguments both for and against separate and co-ed training regimes are physiologically and psychologically sound as different training regimes are required to bring male and female musculature up to the same standard. Because of that, I can see where segregated "preliminary" courses would be of benefit. I can also see where integrated "qualification" courses would be of benefit - especially when both the males and the females knew that they were (relatively) evenly matched physically.

Not only is there no need for a (metaphorical) "Rangerette" tab but I've never known any woman who would be satisfied with one (if they wanted it at all).
(6)
Comment
(0)

Cpl Kevin Partlow
>1 y
COL Ted Mc, Agreed that the desire for a particular outcome mustn't outweigh the need for sufficient means to reach said outcome. Interesting concept utilizing a unique training program for females that will help enable them to achieve the standard qualifications in place. Thanks for posting a possible solution to an implementation problem.
(0)
Reply
(0)

SSG Robert Perrotto
Posted >1 y ago
oh - and the APFT requirements should be the same regardless of Gender.
(5)
Comment
(0)
Show More Comments
Read This Next
RallyPoint Home