SGT (Join to see)
704
13
3
8
8
0
On February 28, 1933, pacifist and anti-fascist writer Carl Von Ossietzky was arrested and sent to Esterwegen-Papenburg concentration camp. He was awarded the Nobel Peace Prize while still in a concentration camp. From the article:

"Carl von Ossietzky (October 3, 1889-May 4, 1938) was born in Hamburg, though his father, a civil servant, had originally come from a village near the German-Polish border. Seven years after Ossietzky’s father died in 1891, his mother married Gustav Walther, a Social Democrat, who was influential in shaping Ossietzky’s later political attitudes.

Ossietzky’s academic achievement being uneven, he left school at the age of seventeen to become an administrative civil servant in his native city. He soon turned to journalism, the profession in which he was to make a career, his first work appearing in Das Freie Volk [The Free People], the weekly organ of the Demokratische Vereinigung [Democratic Union]. On July 5, 1913, an article by Ossietzky criticizing a pro-military court decision in Erfurt drew charges of «insult to the common good» from the Prussian War Ministry. When Ossietzky was called to make a court appearance some time after his marriage on May 22, 1914, to the Englishwoman Maud Woods, his young wife secretly made arrangements to pay his fine.

Though Ossietzky’s health was poor, he was called up for military service in June, 1916, with the Bavarian Pioneer Regiment. After the war, Ossietzky, now a confirmed pacifist as well as democrat, returned to Hamburg where he stirred public opinion by speeches on his doctrine of educating people to a «peace mentality», became president of the local chapter of the German Peace Society, and founded Der Wegweiser [The Signpost], an enterprise which soon failed because of lack of financial backing.

Ossietzky then accepted an appointment as secretary of the German Peace Society, with headquarters in Berlin. There he created the monthly Mitteilungsblatt [Information Sheet], which appeared first on January 1, 1920, and became a regular contributor to Monisten Monatsheften [Monists’ Monthly], using the pseudonym «Thomas Murner»1. A man of intense temperament, Ossietzky soon tired of the office work of the German Peace Society and accepted the post of foreign editor on the staff of the Berliner Volkszeitung [Berlin People’s Paper], a paper whose editorial policy was nonpartisan, democratic, and antiwar.

Ossietzky had a brief flirtation with politics in 1923-1924 when the entire editorial staff of the Berliner Volkszeitung became involved in the founding of a new party, the Republican Party. After the defeat which the party suffered in the Reichstag election of May, 1924, Ossietzky joined the political weekly Tagebuch [Journal], revealing in his contributions to that periodical a disillusionment with his own political efforts and some skepticism about the wisdom of the masses2.

In 1926 Siegfried Jacobsohn, founder and editor of Die Weltbühne [The World Stage], offered Ossietzky a position on his editorial staff. Jacobsohn had already become involved in efforts to uncover and publicize the secret rearmament of Germany, and Carl von Ossietzky was to continue this unpopular editorial policy, for Jacobsohn died unexpectedly in December, 1926, and shortly thereafter his widow named Ossietzky editor-in-chief. In March, 1927, Die Weltbühne published an article by Berthold Jacob3 which criticized the Reichswehr for condoning paramilitary organizations. Ossietzky, as the editor responsible, was tried for libel, found guilty, and sentenced to one month in prison.

Refusing to be intimidated, he published in March, 1929, an article by Walter Kreiser which was, in effect, part of a campaign by Ossietzky of opposition to secret German rearmament in violation of the Treaty of Versailles. At a hearing in August, 1929, Ossietzky was charged with betrayal of military secrets, was tried in November, 1931, found guilty, sentenced to eighteen months in Spandau Prison, and released after seven months in the Christmas amnesty of 1932.

By early 1933, Ossietzky, more clear-sighted than his optimistic colleagues’ recognized the gravity of the political situation in Germany, but he refused to leave the country, saying that a man speaks with a hollow voice from across the border. On February 28, 1933, the morning after the Reichstag fire, Ossietzky was apprehended at home by the secret police, sent to a Berlin prison, then to concentration camps, first at Sonnenburg and later at Esterwegen-Papenburg. In these camps, according to reports from fellow prisoners, he was mistreated, even forced to perform heavy labor although he had already sustained a heart attack.

Ossietzky’s candidacy for the Peace Prize was first suggested in 1934. Berthold Jacob, a companion in many a cause, may have been the first to formulate an actual plan to secure the nomination. The idea was taken up by his colleagues in the German League for Human Rights4, by Hellmut von Gerlach, a former associate on Die Weltbühne who undertook a letterwriting campaign from Paris, by organizations and famous people in many parts of the world. The nomination for 1934 arrived too late; the prize for 1935 was reserved in that year but in 1936 was voted to Ossietzky.

At this point, Ossietzky, ill with tuberculosis, had little time left to live, but the government refused to release him from the concentration camp and demanded that he decline the Nobel Prize, a demand that Ossietzky did not honor. The German Propaganda Ministry declared publicly that Ossietzky was free to go to Norway to accept the prize, but secret police documents indicate that Ossietzky was refused a passport, and, although allowed to enter a civilian hospital, was kept under constant surveillance until his death in May, 1938.

The German press was forbidden to comment on the granting of the prize to Ossietzky, and the German government decreed that in the future no German could accept any Nobel Prize.

Ossietzky’s last public appearance was at a short court hearing at which his lawyer was sentenced to two years at hard labor for embezzling most of Ossietzky’s prize money." 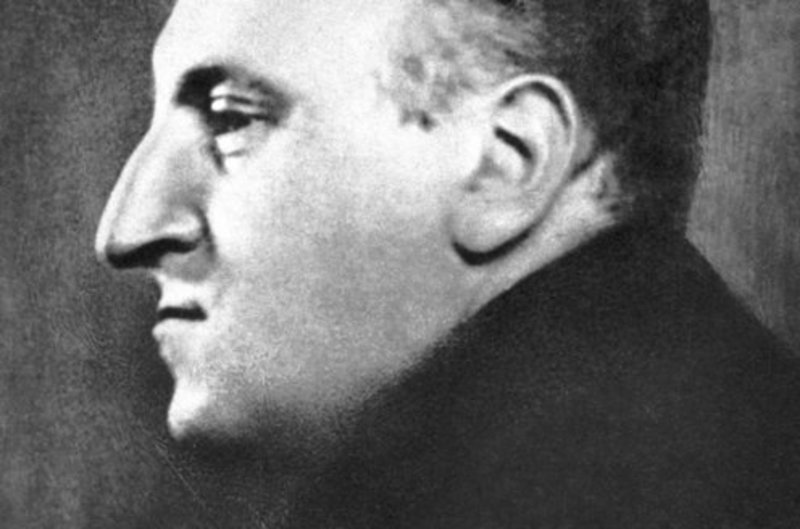