MAJ Montgomery Granger
1.89K
13
3
6
6
0
Apparently, no one remembers 9/11/01, when in order to save themselves from a real life towering inferno, victims of the terror acts of unlawful combatant Islamists JUMPED from the Twin Towers of the World Trade Center in New York City. "A Handful" of unlawful combatant Islamists "were waterboarded" which resulted in obtaining "important information that saved many lives," according to George W. Bush in his memoir, "Decision Points." To date, 731 detainees have been RELEASED from the US military detention facility at Guantanamo Bay, Cuba, and NONE have been executed, beheaded, blown up, hacked to death, dragged naked and lifeless through the streets, drowned or burned alive; all things our enemies have done to us and/or our allies. Imagine the phenomenal restraint it has taken not to do these same things to our enemies, or at least execute the lot of them. "No one does [detention operations] better than the US." So said ICRC physicians I worked with at Gitmo and later in Iraq. The US is the most civilized, benevolent and generous nation on earth. At the time the waterboarding was performed, and then only by highly trained CIA operatives and never by any DoD personnel, the practice was legal and approved. Only later was it arbitrarily added to a list of "torture" practices. The US and other countries use waterboarding in training so as to prepare soldiers and operatives for the inevitable should they be captured. 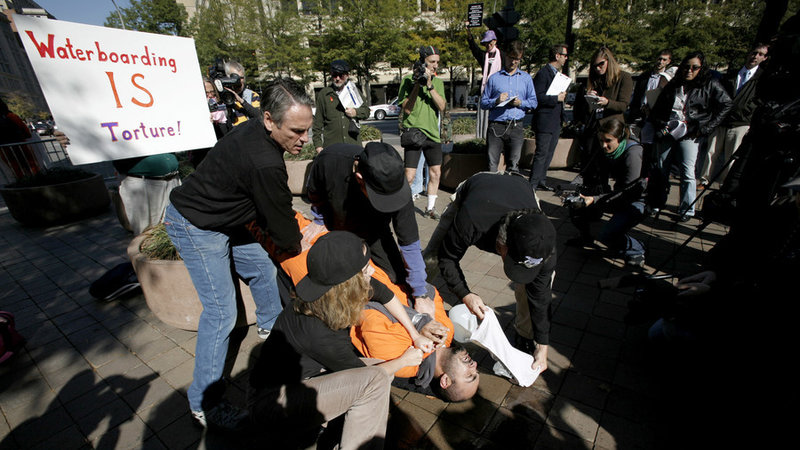 Posted from rt.com
Posted in these groups:

LTC David Brown
Edited >1 y ago
Posted >1 y ago
Read a bunch of the comments by liberals at the end of the piece. Pretty clear they are completely ignorant of the intelligence required to become a Green Beret. Their conceit and arrogance is incredible. When you use the term waterboarding there are a bunch of derivations. These clowns are totally ignorant.
(2)
Comment
(0)

As far as I'm concerned those guilty of terrorist actions should be introduced to a couple ounces of lead traveling a few hundred feet per second to the back of the head. Letting them in front of cameras wasn't the best of plans. (I have a few expletives I thought of as I typed that, but I'm trying to be PG.)

Correct me if I'm wrong here, but the US military already has regulations about interrogation techniques. There are two sources that can change those regulations. Congress, and the Joint Chiefs if the former hasn't ruled. The Commander-in-Chief can weigh in, but if Congress has already passed military regulations then they have to change or remove them.
(1)
Comment
(0)
Read This Next
RallyPoint Home