RP Members and Connections I found this article to be interesting - posted the entire article below for your convenience. Transactional leadership and Transformational leadership & Mental Health - your thoughts?

Two Types of Leadership, and How They Apply to Veteran Mental Health
Published on October 4, 2016

If there is one thing that veterans know, it’s leadership. Good leadership, bad leadership, toxic leadership, inspirational leadership. The concept of leadership is hardwired into the military’s hierarchical system, and is one of the core elements of success of America’s modern military. In my experience, those who haven’t served in the military have a misconception that military leadership is all about blind obedience, that veterans are all mindless zombies that follow orders without question. Nothing could be further from the truth; in my 22 year career, I’ve had great leaders, mediocre leaders, and some pretty terrible leaders. This is because, like every other organization on the planet, it’s made up of humans, and humans aren’t perfect.

Leadership theory, leadership styles, the theoretical aspects of leadership, all of these are huge when it comes to motivating others. Acknowledged leadership experts like John C. Maxwell and Simon Sinek have established well-deserved reputations for helping others understand the concept of “leadership” and how to apply it to their lives. Hanging out in the shadows of giants, as I am, there are only two very basic types of leadership that I want to talk about today: transactional leadership and transformational leadership.

Transactional leadership, in the military, was pretty common. Do what I say, and you get stuff you want. Don’t do what I say, and you get stuff you don’t want. It was a very straight, give-and-take kind of relationship. I was pretty surprised early in my career in the Army: “you mean, all I have to do is show up on time, do what I’m told, and I get promoted? I can do that!” Transactional leadership is based on actions that will either bring rewards or punishment. By doing what I’m told in the Army, I was rewarded: promotions, time off, recognition, respect. I was once even given tickets to a Rolling Stones concert in Germany for winning a Soldier of the Quarter board. By contrast, if I don’t do what I’m told, the same happens in reverse…promotions become demotions, time off is taken away. The challenge with transactional leadership is that it only lasts as long as the rewards have value and the punishment is aversive in the eyes of the individual being led. Transactional leadership can quickly bring out initial compliance, but is not sustainable. How many times have you seen a bunch of Soldiers or Marines working like ants when the Gunny or Platoon Sergeant is around, but then slack off as soon as they’re out of sight?

So what does this have to do with veteran mental health? “You’re a mental health counselor, not a leadership coach,” I hear you say, and you’re right. The strange thing is, in my experience, veterans seeking mental health with a professional react in many of the same ways.

When a veteran first comes to my office, it’s many times because things aren’t working well. “I’m only here because I have to be,” they say, many times because they want to save their marriage, or are struggling at work, or got in trouble with the law. They come in because they have to, not because they want to…transactional. Just like in leadership, this is a behavioral change without much corresponding change to thought or internal values. At some point during our work together, however, the shift between transactional compliance and transformational compliance happens. Some sooner, some later, but when the veteran gets to the point of actually wanting to change how they view the world, how they think and feel, then the magic starts to happen. When the veteran realizes, “I’m doing this for myself, not for anyone else” and “I’m doing this because I want to, not because I have to,” that’s when real change can happen in their lives.

If you’re a veteran, and things don’t seem to be going quite right in you post-military lives, is it because you’re stuck in an old way of thinking? Is it because you’ve learned to be rigid and inflexible? Talk it over with someone. Find a mental health professional that is familiar with veterans, and if you don’t find one right away, keep looking until you do. Getting to the point of change because you want to, and not because you have to, will be much more fulfilling and long-lasting, and much more pleasant than the challenges you’re currently facing.

Duane K. L. France is a combat veteran of both Iraq and Afghanistan, as well as a mental health counselor practicing in the state of Colorado. Did you enjoy this post? Please comment, like, and share in order to join the conversation regarding veteran mental health. You can sign up for updates from Duane's blog, Head Space and Timing, read Duane's previous posts on http://www.veteranmentalhealth.com and follow him on Facebook, Twitter and LinkedIn. Keep the conversation about #veteranmentalhealth going. 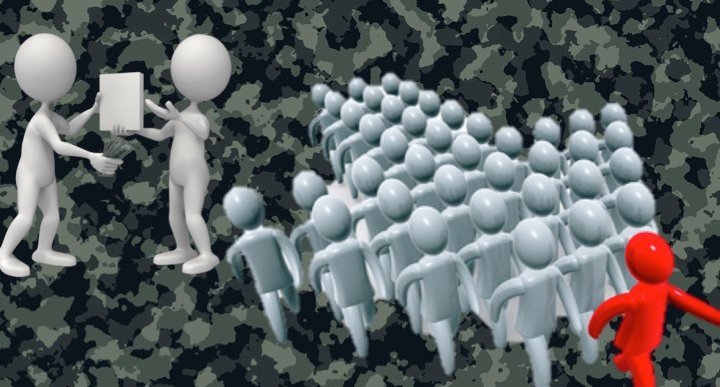 LTC Stephen F.
Edited >1 y ago
Posted >1 y ago
Thanks for sharing COL Mikel J. Burroughs My apologies for taking so long to respond.
Of course there are many types and styles of leadership - some are universally beneficial while others such as toxic leadership are universally bad for the leader and the led.
(1)
Comment
(0)
Show More Comments
Read This Next
RallyPoint Home