"At noon, a horse-drawn wagon passed by lunchtime crowds on Wall Street and stopped across the street from the headquarters of the J.P. Morgan bank at 23 Wall Street, on the Financial District's busiest corner. Inside the wagon, 100 pounds (45 kg) of dynamite with 500 pounds (230 kg) of heavy, cast-iron sash weights exploded in a timer-set detonation,[5]:77 sending the weights tearing through the air.[6] The horse and wagon were blasted into small fragments, but the driver was believed to have left the vehicle and escaped.

The 38 fatalities, most of whom died within moments of the blast, were mostly young people who worked as messengers, stenographers, clerks, and brokers. Many of the wounded suffered severe injuries.[1]:329–30 The bomb caused more than $2 million in property damage ($24.4 million today) and destroyed most of the interior spaces of the Morgan building.[7]

Within one minute of the explosion, William H. Remick, president of the New York Stock Exchange, suspended trading in order to prevent a panic.[8] Outside, rescuers worked feverishly to transport the wounded to the hospital. James Saul, a 17-year-old messenger, commandeered a parked car and transported 30 injured people to an area hospital.[9] Police officers rushed to the scene, performed first aid, and appropriated all nearby automobiles as emergency transport vehicles.[10]

Reaction
The Justice Department's Bureau of Investigation (BOI, the forerunner of the Federal Bureau of Investigation) did not immediately conclude that the bomb was an act of terrorism. Investigators were puzzled by the number of innocent people killed and the lack of a specific target, other than buildings that suffered relatively superficial, non-structural damage. Exploring the possibility of an accident, police contacted businesses that sold and transported explosives.[11] By 3:30 pm, the board of governors of the New York Stock Exchange had met and decided to open for business the next day. Crews cleaned up the area overnight to allow for normal business operations the next day, but in doing so they destroyed physical evidence that might have helped police investigators solve the crime.[1]:160–61 The New York assistant district attorney noted that the timing, location, and method of delivery all pointed to Wall Street and J.P. Morgan as the targets of the bomb, suggesting in turn that it was planted by radical opponents of capitalism, such as Bolsheviks, anarchists, communists, or militant socialists.[1]:150–51

Investigators soon focused on radical groups opposed to U.S. financial and governmental institutions and known to use bombs as a means of violent reprisal. They observed that the Wall Street bomb was packed with heavy sash weights designed to act as shrapnel, then detonated on the street in order to increase casualties among financial workers and institutions during the busy lunch hour. Officials eventually blamed anarchists and communists. The Washington Post called the bombing an "act of war".[12] The Sons of the American Revolution had previously scheduled a patriotic rally for the day after (September 17) to celebrate Constitution Day at exactly the same intersection. On September 17, thousands of people attended the Constitution Day rally in defiance of the previous day's attack.[1]:166–68

The bombing stimulated renewed efforts by police and federal investigators to track the activities and movements of foreign radicals. Public demands to track down the perpetrators led to an expanded role for the U.S. Justice Department's Bureau of Investigation, including the General Intelligence Division of the BOI headed by J. Edgar Hoover.[1]:272–82 The New York City Police Department also pushed to form a "special, or secret, police" to monitor "radical elements" in New York City.[10]

On September 17, the BOI released the contents of flyers found in a post office box in the Wall Street area just before the explosion. Printed in red ink on white paper, they said: "Remember, we will not tolerate any longer. Free the political prisoners, or it will be sure death for all of you." At the bottom was: "American Anarchist Fighters".[1]:171–75 The BOI quickly decided that the flyer eliminated the possibility of an accidental explosion. William J. Flynn, Director of the BOI, suggested the flyers were similar to those found at the June 1919 anarchist bombings." 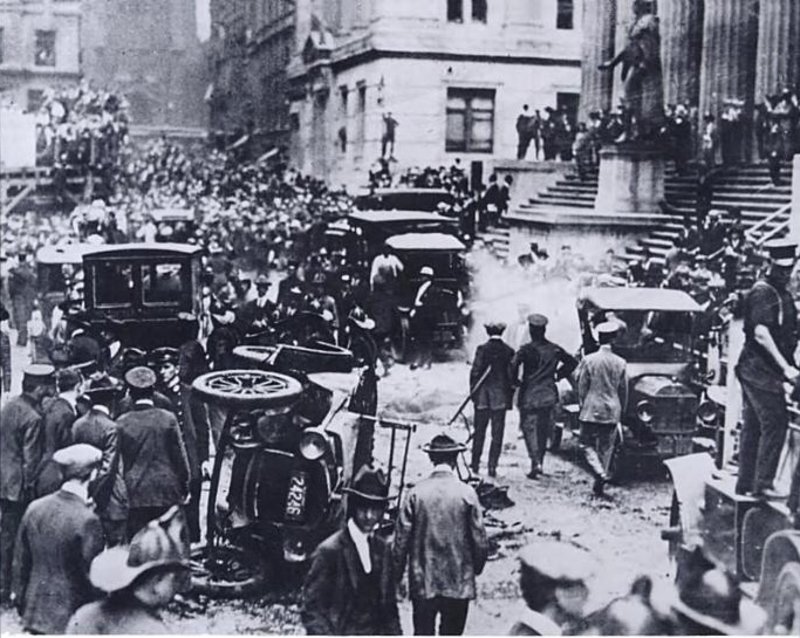