World War I: Battle of Verdun

SGT (Join to see)
1K
30
6
12
12
0
On December 18, 1916, the Battle of Verdun, the longest battle of World War I, ended in a German defeat after nine months of fighting and almost 1 million total casualties. Here is the transcript from the video:

"TRANSCRIPT
NARRATOR: 1916 – it’s been over a year since the beginning of war. The German attack is bogged down in France, a static warfare of heavy losses. Carnage is routine, death is everywhere. The new chief of staff Erich von Falkenhayn advises the Emperor to put the front in motion again. His pursuit is the decisive battle in the West. The Emperor grants the general’s wishes.

The German troops have advanced up to 120 kilometers into French territory. But the strong defenses on the Meuse block the path to Paris. To the west of Metz, in the vicinity of Verdun, German troops are poised to penetrate French fortifications.

On the first of February, 1916 the battle begins with a barrage. In preparation for attack, thousands of artillery guns of all calibers bombard the French bulwarks. The key bastion of Fort Douaumont, with its cannons, machine guns and concealed armored turrets, is considered impregnable. But it is inadequately manned. After five days and immense losses, the Germans conquer the Fort.

MAURICE BOURGEOIS: "Our defenses were completely destroyed as a result. Thousands of shells fell on the battlefield."

NARRATOR: It is up to General Henri-Philippe Pétain to save France. He is an experienced strategist and a cunning propagandist.

BOURGEOIS: "'Courage, courage! We’ll get them!' We knew what this meant: To save Verdun at any price. 'Courage! We’ll stop them. They won’t get through!'"

NARRATOR: It is a bitter fight for every meter. Attacks. Counterattacks. There are no victors, only losers.

GUSTAV-ADOLPH GRAF VON HALEM: "Looking at all these victims, you couldn't feel enthusiastic, only obedient, and that’s what we were."

NARRATOR: Verdun is now known as the bone mill. Soldiers become mere materials for a war of attrition. The use of flame throwers and poison gas grenades brings only more suffering and no new breakthroughs. But the mass slaughter continues until December 1916. The fronts are unchanged. And hundreds of thousands of dead remain in the soil of Verdun." 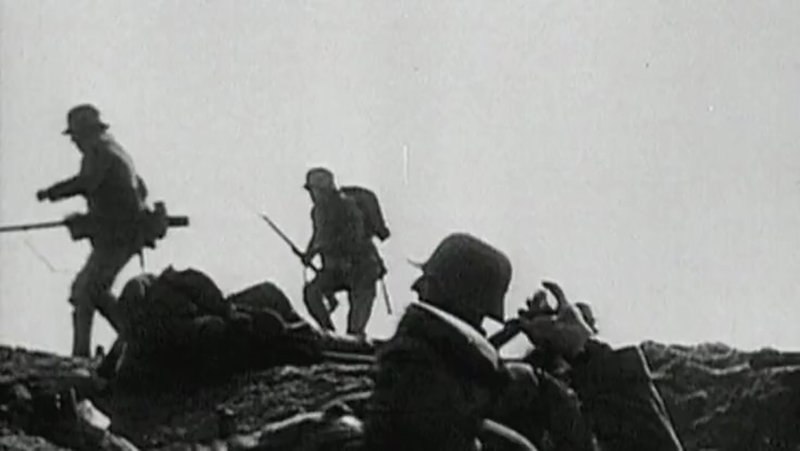 World War I: Battle of Verdun

1SG (Join to see)
Posted 2 y ago
Verdun was one of many slaughters that yielded barely any gain in WWI.
Many are synonymous with misery - Passchendaele, the Somme, Verdun, Ypres, Gallipoli.
So many men ground up for virtually nothing.
(4)
Comment
(0)