What is your most memorable Christmas while deployed?

2011 Christmas Lights- Thank You Troops and Veterans! Thanks for Your Votes!

Since 1775, over 1.3 million American troops have made the ultimate sacrifice. Thank you and please visit SemperFiFund.org to help give back to those who pro...

We sure didn't have the wherewithal all to decorate our hooches like this in Vietnam, but one of the parents of one of my men owned an Italian restaurant in Indianapolis and they sent all the table decorations and stuff to make a helluva Christmas dinner. I and my driver stole a case of frozen steaks from the ration break down point at Long Binh and I horse traded at the mess hall for a lot of other "necessities". The young man who had grown up working in the family restaurant worked his buns off setting it all up and we had a very Merry Christmas despite missing friends and family at home. The leftovers (and they were ample) were donated to an orphanage at Ton Son Nhut. We also stuffed stockings for the orphans with everything we could find as well as small gifts our families sent from home. It became a contest to see who could make the biggest stocking. Have you ever stuffed an Army issue wool sock? They expanded so large that most were taller than the kids. That was Christmas 1967. The Tet Offensive began less than two months later...
Posted in these groups:

LtCol Robert Quinter
Posted 7 y ago
In 1969 I was a Marine helicopter pilot in Viet Nam. The Bob Hope show was playing in DaNang, and, to allow the Marines there the opportunity to attend the show, the units based north of DaNang flew their missions.
I drew the mission of transporting the Division Commander; unusual since he normally flew in a UH-1E. We arrived to pick him up and were immediately loaded with huge crates of socks and hot food. Once we were loaded, the General appeared, along with the Division Sergeant Major who was dressed as Santa Claus.
We spent the rest of the day flying to all the remote sites where Marines in the field were involved in combat operations. At each site, the General and “Santa Claus” would dismount, serve a hot meal and give clean socks to their Marines.
Christmas 69 certainly wasn’t my most festive Christmas, and none of us shared the joy of our families, the Christmas feast, or a candlelit worship service, but the memory of the joy those Marines got from a hot meal and clean socks is with me to this day.
(79)
Comment
(0)
show previous comments

TSgt Rick May
>1 y
Christmas of 1988, deployed to Howard AB, Panama. Took a tour and saw part of Panama City and a local housing area all decorated up, each street had a theme, Santa Claus, Snowmen, etc. The temp was in the 70's, deployed from K. I. Sawyer AFB, Michigan. New Year's eve, I was on a walking patrol on "Commissary Hill" and one of the Lt's turned his car port into a beach and they had a beach party and kept me fed and all the pop I wanted all night.
(4)
Reply
(0)

Sgt (Join to see)
Edited 7 y ago
Posted 7 y ago
Christmas Eve 1969, RVN, I was on Rat Patrol. Two jeeps, each jeep with a driver, Radio Operator, and two men manning a M60 machine gun. I was the Radio Operator, and our job was to patrol the roads at night to keep the VC from planting mines. We drove the roads randomly without lights. At midnight, we could see red and green flares shooting into the sky from the direction of Cau Ha Combat base. The next day, the whole battalion was read the riot act, to ensure that this behavior did not occur ever again. New Year's Eve, I was again on Rat Patrol, and the same thing happened back at the base.
(41)
Comment
(0)

Cpl Gerald Hill
3 y
I was a fire team member of 2nd squad 3rd platoon Foxtrot Company 3rd MarDiv on 4th July 1965 on a reinforced outpost hill in VietNam when we got the dumb idea to celebrate the 4th at midnight and everyone on the hill from their positions open up with small arms fire we were 3 or 4 minutes into it when the Lt. came running up to our position wearing a T-shirt, skivies, hard hat and combat boots and his 45 in one hand asking what do we see and what are we shooting at. I said VC sir their everywhere luckily the next position opened up, a few minutes later we could hear the Lt. screaming to secure all rifle and pistol fire. The next morning he called a formation and we were told he didn't think it was funny and Battalion didn't think it was funny and for punishment we each had to dig a regulation fighting hole 2ftX3ftX6ft
(4)
Reply
(0)

SGT John Graham
>1 y
Sorry Sir, thought we saw movement so we fired illumination rounds...hey if those red and green brought a smile to a grunts face for a moment the cost was worth it.
(4)
Reply
(0)

LCDR Leonard Zuga
2 y
Pretty routine for much of the naval forces in or near the Vietnam combat zone on Christmas Day 1967. This was my first and only deployed Christmas. As an ex-Catholic as I had married a Presbyterian and then deployed with an amphib squadron three weeks after the wedding. She went home to Ohio from Long Beach to be with family while we left the combat zone and sailed went to Subic Bay. My boss and I attended the service in the open sided thatched roof chapel on the base and it rained like mad while the birds sought refuge inside with all of us. This was all pretty exotic for an Ohio kid used to White Christmases and Roman Catholic High masses on Christmas eve. After the service We returned to the ship to be served a typical Christmas meal and wrote letters. That letter is still in the tied up bundle among those saved and that I used to compile my service memoir fo the Library of Congress Veterans History Project. https://www.loc.gov/vets/ I urge all vets, regardless of branch, period and assignments to participate on this project to help round the cultural history of that period.

The Veterans History Project at the Library of Congress

Collecting and preserving the memories of U.S. veterans in your life and community. Learn more about these first-hand accounts from WWI to the current conflicts at loc.gov/vets. 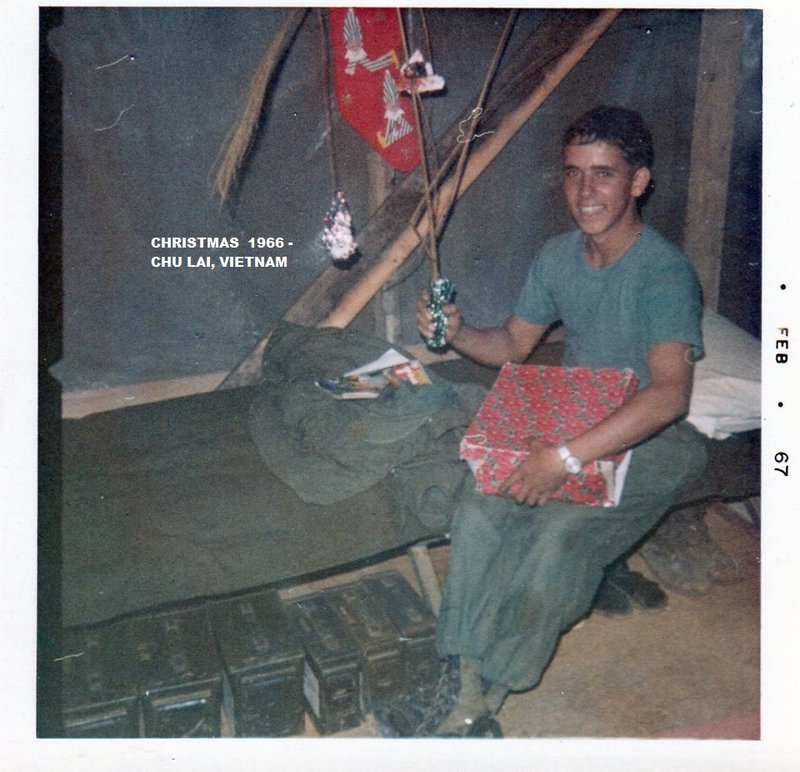 In Chu Lai Christmas of '66 I was busy decorating a tree branch with wrappings from our packages from home. It was a quiet night for a change....but a lonely night. Time to sit and think of all of the things we missed back home. Just us and Armed Forces Radio.
(0)
Reply
(0)
Show More Comments
Read This Next
RallyPoint Home