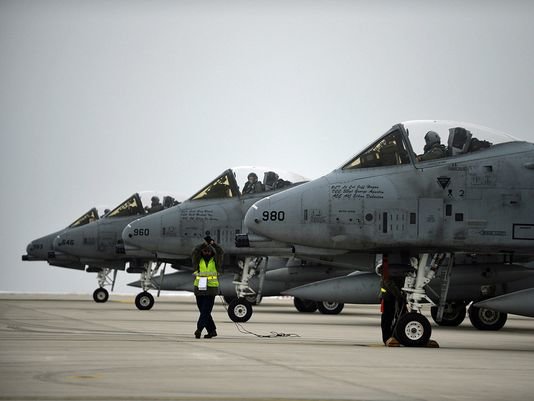 If not allowed to retire the A-10, the Air Force says it will have to send F-16s to the boneyard and delay plans for the F-35 because there aren't enough airmen to maintain both fighters.


If lawmakers succeed in passing a bill requiring the Air Force to keep the A-10 in its fleet for another year, too few maintenance personnel would available to stand up the first operating unit of the F-35 at Hill Air Force Base, Utah, and even fewer to continue maintenance of the F-16, the service told congressional staff in a recent briefing. The base is expected to begin receiving F-35s later this year.

The Air Force plan, if authorized, would be to move F-16s from Hill to replace retiring A-10s at Whiteman Air Force Base, Missouri, and Fort Wayne Air National Guard Base, Indiana.

But if that plan is blocked, the Air Force cannot move the F-16s from Hill. Meanwhile, the Falcon units would lose maintenance personnel to the new F-35 units, causing the F-16s to "lose deployable capability," according to an Air Force talking paper obtained by Air Force Times.

Thus, moving forward with the F-35 "requires the retirement or transfer of assigned Hill AFB F-16s in late FY15/early FY16, " the paper says.

Nevertheless, it is looking more likely that the Air Force again will be directed to keep the A-10s flying. House Armed Services Committee chairman Rep. Mac Thornberry, R-Texas, in his markup of the defense bill included $682.7 million for the fleet. The bill will go to the full committee Wednesday, and multiple senators have also vowed to keep the planes flying.

The Utah base will be the first operational location for the F-35s, with it expected to have 72 of the jets. The base currently has 48 Block 40 F-16s.

The Air Force has said it needs 1,100 trained maintainers to reach initial operating capability for the F-35. Lawmakers have previously blasted Air Force concerns on the maintainer issue, saying it is a "false choice."

After the F-35 program executive Lt. Gen. Christopher Bogdan raised the issue last fall and said he was worried about the impact on IOC, Sen. Kelly Ayotte, R-N.H., said there are other ways to move money and personnel to support both the A-10 and F-35.

"Suggesting that we must prematurely retire the A-10 to fulfill long-anticipated maintenance requirements for the F-35A is a false choice," Ayotte said in a statement to Defense News, sister publication of Air Force Times. "There are a variety of steps the Air Force can take to maintain the combat-proven and cost-efficient A-10, while also providing sufficient maintenance personnel for the F-35A.

Chief of Staff Gen. Mark Welsh has vowed to reach initial operating capability on time, despite a possible issue with having enough maintenance personnel. This includes hiring contractors and increasing use of Air National Guard and Air Force Reserve personnel.

I need to throw a Ref flag in. What color one do I use for BS?

SrA Nathan Roberts
>1 y
How dare you point out how things really are Sgt Aaron Kennedy, MS?!? Can't you just stick to the story? LOL!
(4)
Reply
(0)

MSgt James Mullis
>1 y
Hey don't try and baffle us with things like facts. Dollar for Dollar and Kill for Kill, the A-10 was the most cost effective military aircraft ever produced (with the possible exception of the AC-130 Spectre Gunship). The AF and the Pentagon want to get rid of it for budgetary and political reasons. As I see it the thought process goes like this: Less production and operational cost = Less money to spend in Congressional districts = Less money received from Congress = Less money to play with (i..e spend on modernization, and divert to black projects). Actually, now that I think of it the reasoning may be sound, they are just not being honest about their motives.
(3)
Reply
(0)

Sgt Aaron Kennedy, MS
>1 y
MSgt James Mullis Buckets of money. The bigger the budget, the easier it is to "slush" the money.

When you have a project like the F-35, it's a hell of a lot easier to juggle a few $Billion around if you need it over a 5 year time frame. As it's still under development, cost overruns are expected, and training costs are expected as a % of the total project. Which means more money for the totality of the Air Force. It doesn't actually cost more.... that's a fixed $ not a %... but see how the math works:p

As you mention, you spread load production over as many states as you can, and everyone wins, except the warfighter. This wouldn't be so bad if we just called the A-10Z the F-35A and charged $10B per plane.
(2)
Reply
(0)

SGT Jeremiah B.
Posted >1 y ago
Didn't they test replacing the A-10 with fast movers during DS, only to discover it can't be done effectively? I think the AF just wants to ditch its CAS role in favor of something they can make another Tom Cruise movie with.
(3)
Comment
(0)

Capt Jeff S.
6 y
It simply isn't sexy enough a plane, and CAS brings you low, slow and into the range of ground fire. It also means working with FACs from other services. Apparently this doesn't suit the Air Force well enough. It's a completely different ballgame when you can look your enemy right in the eye while they're shooting at you.
(1)
Reply
(0)

Col Joseph Lenertz
Posted >1 y ago
If you read earlier A-10 questions, you already know I love the A-10. But this article skips the hard stuff.
The Air Force, Army, and Navy do not get to set their own budgets. They are given a budget by Congress. Manpower? Same answer.
Also, can't defend the F-35, but it is not an AF-only program, and it wasn't approved by the AF. Who approved the F-35 program? Yep, Congress. Last I checked, the Navy and Marine Corps are also buying them, along with Great Britain and a few other allies.
So, while Congress can direct keeping the A-10, (some for operational warfighting reasons, some for money-in-my-district reasons) they don't have a plan for what the AF has to cut in order to keep, it, so the AF has to make a plan on what to cut. Transfer the A-10 to the Army? Same answer. Army manpower and budget are fixed. So what would the Army cut in order to make room in their manpower and money budget for the A-10?
We military folks can't hold ourselves to the "Civilian control of the military" doctrine and at the same time attack the Services on decisions which are not theirs to make.
(3)
Comment
(0)

SGT James Elphick
>1 y
Sir, while your argument is solid the Air Forces argument for ditching the A-10, even with the constraints you posited here, does not make sense. The F-16 is specifically meant to be replaced by the F-35 so it should go first, especially considered the F-35 doesn't even have a functioning gun yet. Second, maintenance personnel from the F-16 should transfer more easily to the F-35 than A-10 personnel (fighter vs. attack maintenance).

I appreciate your logic though, I have yet to see this argument and it is a good one.
(2)
Reply
(0)

SMSgt Dan Powell
>1 y
Sir, I have always heard since back in the '60s that the Air Force raised caine because the Army wanted some fixed wing aircraft. I think one of the birds in question was the C-7 Caribou. I believe the Air Force ended picking up the C-7. The biggest reason the Army won't get the A-10 is the Air Force won't allow the precedent. I am with you, Colonel, I supported the A-10 back in the '80s and it is a heckuva bird. The GAU-8 is awesome!
(2)
Reply
(0)

SSgt (Join to see)
6 y
Hey, we can off shore them like everything else...We can transfer the A-10s to Mexico and when we need them we can call Mexico for CAS. We can buy the Chinese version of the F-35, apparently it works!
(0)
Reply
(0)
Show More Comments
Read This Next
RallyPoint Home