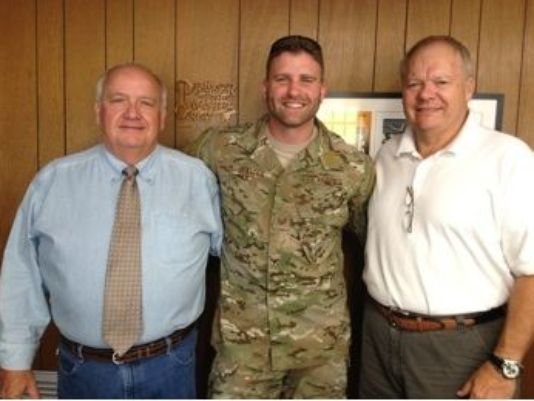 Tech Sgt. Timothy A. Officer, Jr., 32, was a Tactical Air Control Party Airman assigned to the 720th Operations Support Squadron. Officer was a 14-year combat veteran with multiple deployments in support of Operations Iraqi Freedom and Enduring Freedom where he earned multiple medals including two Bronze Star Medals (one with Valor) for his bravery against armed enemies of the United States. Officer is survived by his parents.

Tech Sgt. Marty B. Bettelyoun, 35, was a Combat Controller assigned to the 720th OSS. He was a 15-year combat veteran with multiple deployments to several combat zones and sensitive areas around the world. Bettelyoun is survived by his wife and five children.


“Tech. Sergeants Timothy Officer and Marty Bettelyoun were the epitome of a Special Tactics Airman: professional, dedicated and prepared to give their lives in service to their country,” said Col. Wolfe Davidson, 24th Special Operations Wing commander. “Our community has taken a huge loss with their deaths, and they will be sorely missed. They were respected by their peers for not only their ability on the battlefield, but also for their incredible commitment to friends and family. In the face of this tragedy, we will honor their service and their sacrifice, and we request others respect their family’s privacy as they take it one day at a time.”

Special Tactics airmen jump out of aircraft in military freefall as an alternate insertion into hostile environments, when aircraft cannot land in enemy territory or rough terrain, the release stated. The Special Tactics airmen train to land safely in a planned drop zone and conduct their mission, whether it be personnel recovery, airfield reconnaissance and establishment or special operations air integration.

The cause of the incident is not known, and it is still under investigation.

http://www.airforcetimes.com/story/military/2015/08/04/two-airmen-killed-during-parachute-training-identified/31133171/
Posted in these groups:

I can't recall how many training deaths I saw when I was at at Eglin in the '70s. The military is a dangerous profession even when not in combat. Mostly aircraft crashes, but also maintenance (man ejected into hangar ceiling), rescue (pilot ejected into runway), vehicle (8x rollover) and ordnance testing. I also recall a crewmember riding the door down during a drop on Fld. 3 on what was to have been his last mission before separation.

It takes a special kind of man to go into harm's way in the service of his country.

SN Greg Wright
Posted >1 y ago
Fair wind and following seas, Airmen. You did a job not many of us could.
(1)
Comment
(0)
Show More Comments
Read This Next
RallyPoint Home