Are the military's Ebola precautions excessive? 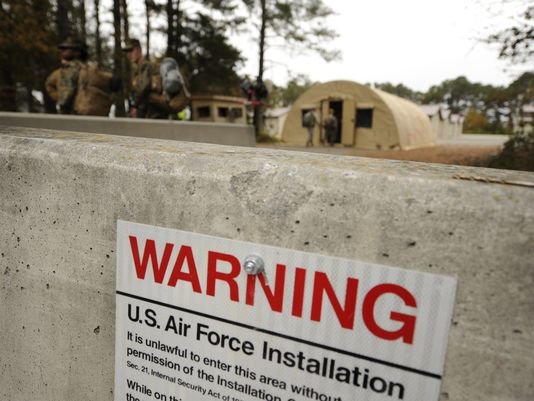 An Air Force major who got sick on a flight back from West Africa suffered from food poisoning, not Ebola, according to the Air Force.

The major was being monitored at Fort Bliss, Texas, because he became ill while returning to the U.S. with about 70 other service members, Stars and Stripes first reported Wednesday. He did not have a fever and he had not interacted with Ebola-infected locals.

He has since joined the rest of his comrades in the mandatory 21-day "controlled monitoring regiment" that U.S. service members go through upon returning from West Africa, Pentagon spokesman Rear Adm. John Kirby told reporters Thursday.

The episode shows the abundance of caution that both the Defense Department and individual service members are taking to prevent the spread of Ebola. When an active-duty Marine realized he had been on an Oct. 13 commercial flight with a nurse who was infected with Ebola, he quarantined himself for three weeks.

The Marine returned to his job at Naval Air Station Joint Reserve Base Fort Worth on Nov. 5 after showing no signs of Ebola, said Capt. Cheryl Dengler, a spokeswoman for Marine Forces Reserve New Orleans.

"So to take a more pedestrian example than the medical one that we're talking about, there might be some members of the military who think that the haircut that's required may not be their best, but that's a haircut that they get every couple of weeks because it is in the best interest of their unit and it maintains unit cohesion, and that is a policy of the military, and that obviously is a situation in which application of military policy is not — or is necessarily different than the application of the policy in a civilian context," Earnest said.

Army Gen. Martin Dempsey, chairman of the Joint Chiefs, has said that the decision to quarantine U.S. troops returning from West Africa was based on science, but he did not say what specific data the service chiefs considered.

But Dr. Daniel Bausch, who has spent years researching Ebola, said he wants to know what physics Dempsey is referring to because the chances of troops infecting other people while Ebola is in its incubation period are "extremely low."

"The data we have is very clear that there has never been any evidence of this virus being transmitted from a person who is in incubation period," said Bausch, an associate professor at Tulane University's department of tropical medicine.

When an Ebola patient begins to vomit, suffer from diarrhea or bleed, they have enough of the virus in their systems to infect other people, he said.

"A person who is in the incubation period and is not sick has very, very little virus — so little in fact that we can't even pick it up on a blood test," Bausch said.

Civilian doctors who treat patients with Ebola undergo a self-monitoring period in which they go to the hospital if they start showing symptoms of the disease, such as a doctor in New York who returned from West Africa after working with Doctors Without Borders, Bausch said.

"That's exactly how the system is designed to work," he said. "It's evidence-based and in fact in that case, it did work. I see no reason why it wouldn't work with the military. Frankly, your ability to monitor those people daily after their potential exposure in the field should be even better than the civilian populations."

http://www.airforcetimes.com/story/military/pentagon/2014/11/21/ebola-precautions-pentagon/19338583/
Posted in these groups:

SFC Vernon McNabb
Posted >1 y ago
Our clinic here at Rucker closed off certain entrances, and only allowed people to come through the main entrance. When I asked about this, the reply was, "We are trying to reduce the chances of ebola spreading". I'll pause here while everyone finishes laughing....So, I proceded to ask, "Does Ebola not know how to enter from the main entrance?"
(4)
Comment
(0)

For organizations such as Doctors Without Borders, they come back as 1 or 2 people, they should follow CDC guidelines and take temp at least 2x per day, notifiy if temp exceedes 100.4*F, and I would recommend, while no true full up quarentine, maybe not going out into huge public places such as Black Friday shopping, public transportation, etc until 21 days has expired. They also have different "protections" available to them such as the Constitution that protects them from unreasonable confinement etc. If they are not symptomatic, they are not contageous... end of story (or should be).

The military is a different creature.

We have the actual MEANS to enforce a quarentine (legal orders to be followed). We do not generally come back in 1-2 people, we come back as a group of 10 to 100. They could then move out into the community with less control of a group that size. The community would know that people came back and that could raise alarm within the community....just remember the alarm raised due to 1 nurse in Maine...think about 100 troops all returning at once!! Quarentine returning military members for 21 days prior to releasing back into the community would be a solid public assurance measure.
(3)
Comment
(0)

SSgt (Join to see)
>1 y
Something breathtaking about big ships in port. It is like a world upon the water.
(0)
Reply
(0)

Lt Col (Join to see)
Posted >1 y ago
It may be easy to arm-chair quarterback and second guess the safety measures taken to protect everyone. However, how would you feel if it was you or your loved one who became exposed and contracted the virus as a result of someone not following protocol?
(1)
Comment
(0)
Show More Comments
Read This Next
RallyPoint Home