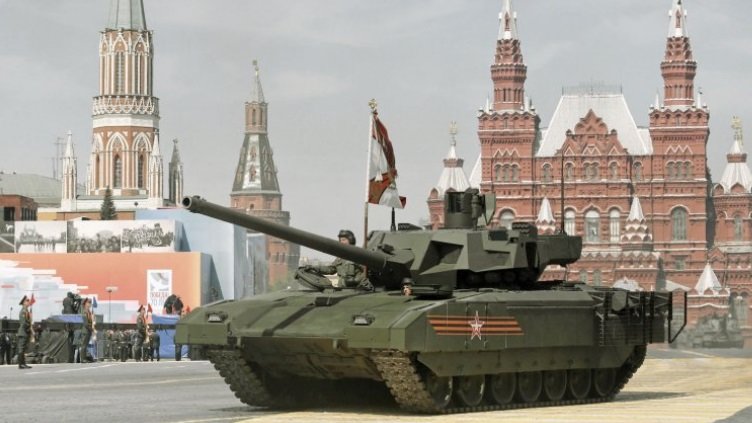 Armour experts sceptical over T-14 'invisibility' claims
Armour specialists from both Russia and the United States are sceptical of recent claims made by the enterprise that produces Russia's new T-14 Armata MBT that the tank is essentially "invisible" to radar.

The claim was made by the director of the Nizhi-Tagil-based UralVagonZavod (UVZ) plant, Vyacheslav Khalitov, on Ekho Moskvy radio on 3 July.

"We essentially made the invisible tank," said Khalitov. He also elaborated on the tank's internal arrangement, stating that key "emitters" that normally make other tanks vulnerable to current-generation anti-armour weapons are fitted as far as possible into the interior of the Armata to reduce its infrared (IR) signature.

About the tank's own radar signature, Khalitov said the T-14's hull is coated with special radar-absorbing paint and other materials and appliqués that make it difficult to be detected.

However, US specialists with many years of experience in the design of current-generation armour and Russian experts on former Soviet programmes that were designed to reduce AFV signatures both expressed doubts.

A retired US army flag-rank officer who was involved at the senior levels of AFV development - including that of General Dynamics' M1 Abrams MBT - has analysed the T-14 design and other claims regarding its signature reduction and told IHS Jane's , "These claims would have to be proven. Placing heat-generating components 'deep inside' in the vehicle won't help; modern thermal technology is very sensitive and when the tank is moved, or a weapon is fired, or a person is exposed, the thermal signature will light up. Plus, no matter where the engine is, when an engine big enough to move a 40- to 50-ton tank is fired up, it will have a signature."

Russian specialists familiar with radar signature reduction techniques told IHS Jane's that "most of this kind of research in Russia has been performed with an eye towards application to aircraft - in order to reduce a signature as seen from another aircraft's radar set or a SAM [surface-to-air missile] radar station. This technology is not optimised for protecting ground targets from air-to-surface attacks.

"What you are trying to do in reducing a radar return for these scenarios is also very different," one said. "For airborne targets you are trying to reduce an RCS [radar cross-section] to make a lock-on more difficult. For ground targets you would be trying to make a tank indistinguishable from ground clutter. These two do not necessarily overlap in how you approach them."

In a radical departure from Soviet and Russian tank designs that date back to the Second World War, the T-14 has a modular internal arrangement that separates the crew from the tank's main gun and the ammunition storage compartment. This layout has been proven in tank designs developed by other nations to significantly enhance the survivability of the crew.

Noting the Russians had "finally separated ammo from people", the retired US Army officer said this was "something we did 40 years ago with the Abrams", but added, "The comments [from UVZ] about gun, ammo, and fire control are interesting. The Russians have lagged us forever in these areas. Some of that was doctrinal-based as the way they planned to fight a close battle based on mass and rapid firing at short range, where precision fire control was not so critical. As we saw in Gulf War One, we had almost a two-times range advantage over them.

"But I think some of the reason for the technology gap was/is because what we do in our industry is hard to design, build components for, and manufacture to a level of precision and robustness that a combat system requires."

In addition to its signature reduction modifications, the T-14's other self-protection features include a new-generation self-protection system that integrates its Malachit exploding dual-reactive armour with an active protection system, designated Afghanit, that employs a millimetre wave radar to track incoming anti-tank weapons and initiate countermeasures. The T-14 also relies on composite, layered armour similar to that used in the M1.
http://www.janes.com/article/53540/armour-experts-sceptical-over-t-14-invisibility-claims
Posted in these groups:

LCDR (Join to see)
Posted >1 y ago
Does it probably have a significantly lower radar "footprint" or visibility? I wouldn't doubt it for a minute. Is it "stealth" though? Most likely not.

As a complete side note, invisibility to radar is only important if physical visibility is difficult. This makes sense in the ocean (huge compared to number of ships) and the air (same thing and 3 dimensional) but realistically the applications of driving a battalion of tanks through the field and NOT being seen by radar are vastly mitigated by the fact that you can see them with your eyes...
(1)
Comment
(0)

PO1 John Miller
Posted >1 y ago
IHS Jane's
Seems like false advertising to me. I'm sure their IR footprint will be reduced (as LCDR (Join to see) stated), but I seriously doubt it will be completely "invisible."
(0)
Comment
(0)

SCPO David Lockwood
Posted >1 y ago
This could be a game changer!
(0)
Comment
(0)
Read This Next
RallyPoint Home