Can combat shirt wear be denied due to being overweight?

SSG (Join to see)
20.7K
73
31
5
5
0
My question concerns authorizization of wear for combat shirts. My unit is deployed and tasked with force protection/ base security. Up until now we have all been authorized by the commander to wear Combat shirts with our IOTVs while on duty. Recently an issue has arisen with overweight soldiers and their appearance while wearing said shirt. The unit was told we will have height and weight done and any soldier who does not meet body fat standards will no longer be allowed to wear combat shirts. My question is if this is a legitimate reason to deny the soldiers privelege to wear the shirt? I understand the wear of the combat shirt is at commanders discretion but can it be denied individually? It seems similiar to allowing one soldier the privelege in the field to wear a fleece cap and denying it to another against the cold. I have no dog in this fight just trying to educate myself by seeking other opinions.
Posted in these groups:

SGM Erik Marquez
Edited 3 y ago
Posted 3 y ago
I think you will find the answer is, yes by making a policy and enforcing it evenly the action will stand.

A Better question though is, why are those SM still in the military?
Yes that question will bring out the" Fat does not mean they are not a great SM and better than the skinny SM who sucks at his job" crowd
To which I pre submit....No, no he(she) is not, they are good at portions of their duties for which I commend them, they are failures at other assigned or implied duties and for that Im initiating and supporting separation from service.

"But he is better and fixing widgets than that skinny kid"
Ok great train the Skinny kid then, and if he is untrainable, we will bar and or separate him as well.
(9)
Comment
(0)
show previous comments

SPC Kortney Kistler
3 y
At some point in the career of all these leadership positions you mentioned, every single person in that position has raised their hand to be selected as a person of responsibility and consequence.

But in any case, the soldiers who are apparently detrimental to the mission, still ended up down range. This is by either willful negligence of senior leadership or by not enough rank and authority by the those with direct contact with the individual problem.

Why as a leader would one pass along unserviceable equipment to another unit?

What good is it to let someone drag deadlined gear down range?
(1)
Reply
(0)

SGM Erik Marquez
3 y
SPC Kortney Kistler - "What good is it to let someone drag deadlined gear down range?"

I suspect, though no fault of your own, you simply do not have the experience to understand how it happens, and so assume wrongly that it was preventable by many..When reality is it can be caused by just one, argued against by most, happen anyway and now stuck being handled by the company level leadership, only for them to be chastised by others looking on who are ignorant of the company or BN leaders complete lack of responsibility for causing the issue.

At the company level you do not get a say in who stays behind...you can recommend, you can show cause, regulations and policy ...and then when you are told the SM is going, deal with it..... you deal with it.....all while petty ignorant fools snicker and laugh (that is not toward you SPC) at the unit for "bringing" him.

Those are three instances I know about personally and 1st person.
Im one senior NCO.... if I have had personal experience with that kind of nuttery 3 times, how many other SM were deployed that should not of been?
(1)
Reply
(0)

SPC Kortney Kistler
3 y
So, now the blame is likely caused by 1 person in the COC. This was what I meant by the “you” in my earlier comment. “You” is a person of responsibility and consequence that allowed this to proceed.

And, Are you still refering to the fat/smart and skinny/stupid soldiers causing unnecessary deaths and injuries,or are there other instances not fit for duty you are bringing to the table?
(1)
Reply
(0)

SGM Erik Marquez
3 y
SPC Kortney Kistler - SPC Kortney Kistler 5 h
So, now the blame is likely caused by 1 person in the COC. This was what I meant by the “you” in my earlier comment. “You” is a person of responsibility and consequence that allowed this to proceed."

Not what I said, and so no, thats not what I mean.

It is A possibility, that a CDR decided all will deploy
It is A possibility the lackluster group of leadership from the entire NCO and officer chain of command/ NCO support channel SPC squad leader to BDE CDR was the cause.
There are other possibilities......again still my point to you was it is not the definitive YOU, that you used in your post when responding to me..
It may be a person, it may be a group of persons, it might be the SM returned from AWOL the day prior to deployment and the CDR / CSM were not going to saddle the Rear D leadership with a turd and figured they would take him and have him pull all the shit details no good SM should have to pull but does.

"And, Are you still refering to the fat/smart and skinny/stupid soldiers causing unnecessary deaths and injuries,or are there other instances not fit for duty you are bringing to the table?"

I did not say anything like that.. I said "At the company level you do not get a say in who stays behind...you can recommend, you can show cause, regulations and policy ...and then when you are told the SM is going, deal with it..... you deal with it.....all while petty ignorant fools snicker and laugh (that is not toward you SPC) at the unit for "bringing" him.

As examples of SM that were deployed and should not have been, I intentionally did not say what their issuers were because it makes no difference, at that point in the conversation is was about SM who should not have been deployed. The why is unimportant to the issue.
(1)
Reply
(0)

SFC Matthew Parker
Posted 3 y ago
It's not a privilege, its a piece of uniform issued to address specific environmental and tactical situations. If the duty uniform is Combat shirts then that's the uniform. With that said, Army regulation is clear, the commander can regulate uniform based on wear and appearance.
AR 670-1 2017
3–6. Uniform appearance and fit
a. Appearance.
(1) All personnel will maintain a high standard of professional dress and appearance. Uniforms will fit properly; the proper fitting of uniforms is provided in DA Pam 670–1.
Soldiers must project a military image that leaves no doubt that they live by a common military
standard and uphold military order and discipline.

3–7. Required or prohibited wearing of the Army uniform
Note. This paragraph is punitive with regard to Soldiers. Violation by Soldiers may result in adverse administrative action and/or charges under the provisions of the UCMJ.
Para k. Wearing Army uniforms is prohibited in the following situations:
(4) When wearing the uniform would bring discredit upon the Army, as determined by the commander.
(7)
Comment
(0) 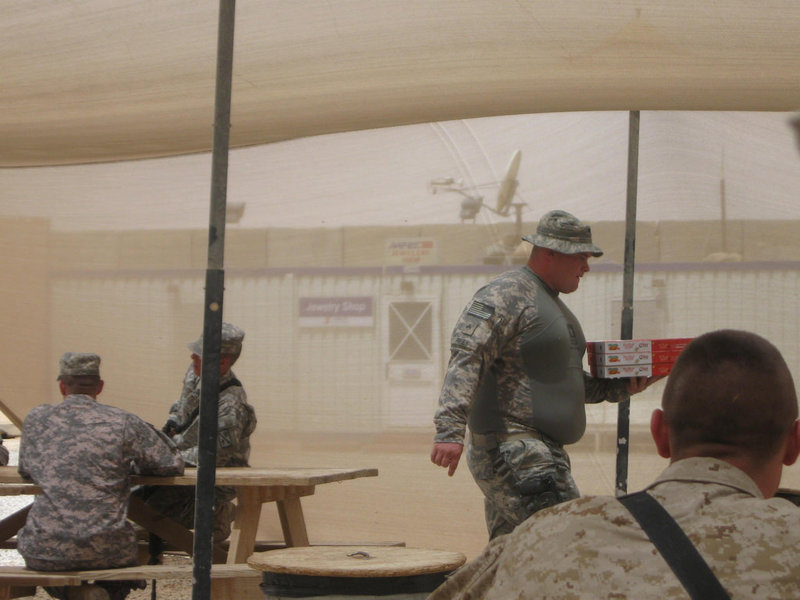 MAJ (Join to see)
3 y
Thanks. It reminds me of my Reserve Deployment for Desert Storm. One E-5 was like 5'8" and 350 lbs. I did not know they made BDU's that size.
(0)
Reply
(0)
Show More Comments
Read This Next
RallyPoint Home