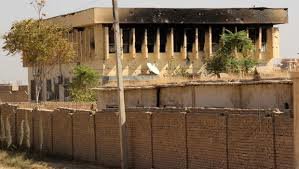 "WASHINGTON — Two servicemen have told Congress that American special forces called in an air strike on a hospital in Afghanistan because they believed the Taliban were using it as a command center, contradicting the military's explanation that the attack was meant for a different building.

Rep. Duncan Hunter, a California Republican who serves on the House Armed Services Committee, quoted the servicemen without naming them in a letter he sent Tuesday to Defense Secretary Ash Carter. The letter highlights gaps in the military's explanation of an October air strike on a Doctors Without Borders hospital in Kunduz that killed 31 civilians.

Hunter said the accounts provided to him raise the possibility that the U.S. was manipulated by its Afghan partners into attacking the hospital. If true, that would be a setback in the U.S. effort to work with and train a local force capable of securing that country.

A Pentagon spokesman, Navy Capt. Jeff Davis, said the secretary had received the letter but the Defense Department would not comment. Hunter declined to identify the servicemen because he said they feared disciplinary action.

The two servicemen told Hunter the U.S. special forces soldiers who called in the air strike were not aware the Doctors Without Borders building was still being used as a hospital. Afghan forces, they say, told them it had become a Taliban command and control center.

"There were enemy in there," Hunter quotes one of the servicemen as saying. "They had already removed and ransomed the foreign doctors, and they had fired on partnered personnel from there."

Doctors Without Borders leaders and independent witnesses insist there were no armed men in the hospital, and the military's investigation supported that contention.

The military's official account, a summary of which was disclosed on Nov. 25 by the commanding U.S. general in Afghanistan, says the soldiers and airmen intended the air strike to hit a different building a half mile away — an Afghan intelligence facility said to be occupied by the Taliban.

It was only because of technical failures and human error, Gen. John Campbell told reporters, that an AC-130 mistakenly struck and destroyed the trauma center in the Doctors Without Borders hospital.

Campbell's account didn't address the evidence that the U.S. had been focusing on the hospital.

The Associated Press has reported that military intelligence analysts had been tracking reports of Taliban activity at the hospital, including the presence of a Pakistani intelligence operative working with insurgents. Specific intelligence gathering flights over the hospital were requested by the analysts, according to records viewed by a current and a former U.S. official.

The day before the attack, a senior special forces commander wrote in a report that the hospital was in Taliban hands and his objective was to clear it. A senior Pentagon official called Doctors Without Borders to ask whether their hospital had been overrun; he was told it had not.

Even after it became evident the attack had killed civilians at a hospital, senior Afghan officials continued to insist that the strike was justified because Taliban had been present.

Pentagon officials have said they cannot discuss the case because of investigations pending into the culpability of individual service members, some of whom have been suspended from duty.

Hunter wrote to Carter of his concern "that inaccurate information and poor intelligence was provided by Afghan forces — including information that was both incorrect and unverified by U.S. intelligence and personnel."

Campbell said the AC-130 was sent to attack a different building, but when its sensors malfunctioned, the crew used visual cues to home in on what turned out to be the wrong building. One minute before the attack, he said, the crew passed on the coordinates of the building it was about to strike to its headquarters, which knew Doctors Without Borders was in that compound but was unable to detect the mistake in time.

Campbell did not say how the AC-130 got the coordinates of the hospital it was flying over, so it is unclear whether the crew used the plane's instruments to determine them or got the information from U.S. personnel on the ground, who were working with Afghans.

Campbell did not say whether Afghan forces gave the coordinates of the hospital to the Americans. Afghan special forces had raided the hospital in July and disliked that the hospital treated Taliban.

The military's investigation was divided into two parts, one of which was a probe designed to examine civilian casualties, which the AP obtained. It says the accounts of service members about how and why the air strike was requested were inconsistent and would have to be resolved by the other investigation, the one examining culpability.

That investigation found that the rules of engagement were not followed, Campbell said, but he did not offer details. He acknowledged that no U.S. ground forces had a direct view of the hospital before or during the attack.

Hunter's letter questioned how the military could misidentify an internationally run hospital that had been operating for years, given the billions of dollars that have been spent on technology designed to help commanders understand their battlespace."

http://www.usnews.com/news/politics/articles/2015/12/08/lawmaker-were-us-forces-manipulated-into-striking-hospital
Posted in these groups:

SGT Jerrold Pesz
Posted >1 y ago
I would not be at all surprised if the Afghans did intentionally give us false info. Hard to tell who is actually on our side.
(2)
Comment
(0)

SSG Warren Swan
Posted >1 y ago
I know I won't get the answer, but these two servicemen that are the "sources". Are they part of the members that were suspended the Pentagon won't discuss? If so, how credible are they, and to not use their names, but use their words as "fact" I question that being there is a whistleblower protection law to help "protect" those that do come forward. In the event there is more to this than originally told, there's going to be a few resume generating moments had by quite a few.
(2)
Comment
(0)

CPT (Join to see)
>1 y
SSG Warren Swan
You are correct, there will not be an answer regarding the "sources".
True but it doesn't protect their family members. I'm sure you know the name Valerie Plame as an example of what can happen.
(0)
Reply
(0)

SGT William Howell
Posted >1 y ago
CPT (Join to see) The Afghans have been doing it for years to fix tribal disputes among other things. Us, as Americans, don't understand how things work there. There is no sense of nationalism. For them is it family, tribe, religion. Throw corruption in there to just make it totally confusing.

I remember some of the police advisers that came in from Helmand. They were tasked with destroying the poppy plants. The Afghan Police Chief there decided who's farms were destroyed and whose were to be left alone. He would take his bribes and those that did not pay he sent the Americans in to destroy their crops. We were nothing more than a pawn in Afghan corruption.
(1)
Comment
(0)
Show More Comments
Read This Next
RallyPoint Home