Disrespected while correcting a Soldier, how would you handle this situation? 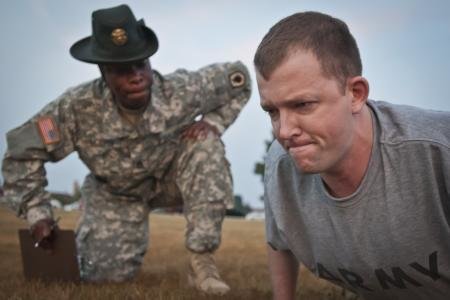 Ok so there I was at a court-martial asking a Soldier why he was wearing ACUs and not ASUs. He started to catch an attitude, so I told him to go to parade rest. He turned away from me looking at my paralegal, putting his hands in his pockets.

My paralegal tells him that he does not need to be looking at him, but at me, because I was the one addressing him, and that he needs to show respect. As the Soldier continues to stare out at my paralegal with his hands in his pockets, I continue to correct him when a civilian comes out to where I was correcting the Soldier stating that she had work to do and I could "yell" at him some other time.

I was so mind boggled and dumbfounded because said civilian used to be in the military. I'm sorry, but the last time I checked the Soldier was given a direct order by a CPT and myself that the duty uniform for the court-martial was ASUs and an alternate uniform had to be approved by the judge, so I was doing my job by asking him why he was in the wrong uniform and then correcting him when he began to disrespect me.

I felt so disrespected I just walked away and sat in a room to cool off.

How would you have handled the situation?
Posted in these groups:

MSG Brad Sand
Posted >1 y ago
I think the 'I was at a court-martial' started us on the path to an answer?
(277)
Comment
(0)
show previous comments

SGT Leon Riege
3 y
obviously this individual doesn't care about dress code or following orders ,this is what article 15's are made for
(1)
Reply
(0)

SSgt William Mavis
5 y
i know i would,i knew trouble was coming when we did away with the red line brig
(4)
Reply
(0)

SSG Marciano Gonzalez
5 y
My sentiments exactly in todays army Iwould be court martialed too. because the wall to wall counseling would be in session.
(3)
Reply
(0)

SPC John Bush
>1 y
This was the reason I decided not to make the Army my career, although I had intended to. Enlisted in 74, had always wanted to join, my father retired from the Army. I remember many of the stations that my family was allowed to be with him and especially his ETS station at Fort McPherson. It wasn’t the same Army I had grown up in. The last straw was an E-3 telling the company commander, a Captain, that he was not going to the field and there wasn’t anything he could do about it. He got booted, which is probably what he wanted anyway. That none of the senior enlisted present did anything at the time or later was just not acceptable to me. He did receive some behind the barracks encouragement from several others at a later date. Never regretted my time in the Army and have lamented many times getting out
(0)
Reply
(0)

COL Jean (John) F. B.
Posted >1 y ago
Without knowing the specific details of your position and the relationship of your position to the soldier out of uniform and that of the civilian, it is hard to definitively say what you should have done. However, assuming that you acted in a professional manner in correcting the soldier and he copped an attitude, I think you were certainly in your right to carry out the correction to a logical conclusion, without interference of the civilian. As such, I probably would have informed the civilian that this was a "military matter' and that she need not be involved. I then would have carried on with the correction, possibly moving it outside or another close-by location.

If, on the other hand, none of that worked, I would report the incident to my chain of command, with the expectation that they would follow-up with the proper personnel to ensure it did not happen again. I assure you that if one of my soldiers/NCOs/officers informed me of a situation like that, I would take appropriate action.

I have never been one to back down or retreat, if I was right, but discretion must always be exercised. There is a time and place for everything and that may not have been the right time and place to prove a point, even if you are right, but it certainly does not mean that you forfeit your right to follow-up at a later time and place.

I applaud you for not simply ignoring a violation you noticed, as well as "cooling down" rather than going off. I would certainly follow-up, however. It sounds like a soldier and a civilian need some counseling by their supervisory chain.
(196)
Comment
(0)
show previous comments

SSG Jim Husselman
1 y
SSG Marcus Brothers I too have seen CSM/CMD get upset over proper corrective actions and on the spot corrections by other uniformed individuals and I think it is a major flaw in today's military service! I retired after 24 years of military service and I was trained and brought up by old school NCO's and OFFICERS which held the maximum effective range of an excuse mentality and I grew to understand why. Today's younger military personnel (new or newer) to the military do not understand what should always be maintained by service personnel and that is honor, commitment, candor, ICMJ and bullets do not care what our thoughts and opinions are the rules and respect factor is the same all the time in service. We do not have time nor room for the selective service member personality meaning we do not get to follow the rules when we want and not when we dont because as we know know it can and has gotten service personal killing in combat and we train as we fight! I dont believe that because a Soldier is undergoing a UCMJ or belongs to anouther command that they should not be corrected on the spot which the CPT IMHO handled well short of follow up after the fact. The civilian was most definitely out of thier lane and needs to understand the UCMJ does not give them a free pass to intervene in military business and probably needs some corrective action from her boss.
Too many let the younger troops actions slide hince why they believe they can disrespect thier seniors.
(0)
Reply
(0)

SSG (Join to see)
10 mo
MSgt Owens, ASU is Army Service Uniform which refers to the dress uniform used by the Army. It consists of the dark blue jacket and light blue pants. The ACU is the Army Combat Uniform which is the usual duty uniform worn.
(0)
Reply
(0)
Show More Comments
Read This Next
RallyPoint Home