Do you think tensions will rise between the United States and North Korea? 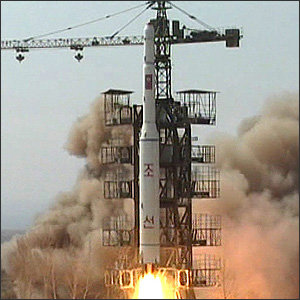 "North Korea has long been a thorn in the West's side. The communist state has test-fired missiles, launched satellites into outer space and conducted nuclear weapon tests, all seemingly in the interest of vexing its southern neighbour and Western enemies.

In recent years, Pyongyang has expressed anger over joint South Korean-U.S. military exercises, as well as tightened UN sanctions after its February 2013 nuclear test. The rhetoric has since cooled somewhat, but the situation continues to be volatile."

(Source: http://www.cbc.ca/news2/interactives/north-korea-dashboard/)
Posted in these groups:

I've been studying the DPRK since I happened on the nightly Radio Pyongyang English broadcasts back around 1979. Kim Il-sung's "dangerously crazy" strategy has altered little through three generations of the Kim Dynasty.

"Tension" is one of the primary arrows in their quiver, and they have lots of experience playing other political entities like a Seven-dollar Stella.
(4)
Comment
(0)

SP5 Michael Rathbun
7 y
PV2 Daniel Shipley, this may be more or less than you desired, but...

First of all, it is often useful to imagine the DPRK as if it were a country that had been entirely taken over by L. Ron Hubbard.

"Dangerously Crazy": do things that appear to be completely insane but that have just enough military credibility to keep the other folks guessing. Because you react differently every time, your adversaries are never quite sure what you will do next.

"Tension": having paltry assets for influencing international affairs in traditional ways, you must create "tension".

Perhaps you will invade the South, in response to blatant aggression by the United States. Perhaps you will do any number of other alarming things, given that you do have one of the largest military forces on Earth nowadays. (We leave aside questions touching on "effective", "well-trained", "well-fed" "competently led" and "well equipped".)

When the "tensions" have reached the proper pitch, you announce your intention to make a major change in the whole system of international relations, and announce your readiness to engage in "warm and friendly*" discussions and negotiations with the South and other interested parties, including (possibly, hint hint) the Americans.

The actual meetings are constantly postponed because of minor but EXTREMELY IMPORTANT details (think discussions of the shape of the table) and when the Great Day dawns, the DPRK aren't there, because of some act of blatant aggression or other demonstration of bad faith by some party, usually the Americans. Back to Square One.

And now, a delightful performance by the Pyongyang Electronic Girls Band. The title is: "Let Us All Valiantly Promote The Invincible Juche Idea".

* Every conversation that the Great Leader, Marshal Kim Il-Sung, ever conducted happened in an officially "warm and friendly" atmosphere.
(2)
Reply
(0)

PV2 Daniel Shipley
7 y
Thank you for your response, but I am running on fumes. 6 hours of sleep in 3 days. When I am more awake I will respond to this. Thank you.
(0)
Reply
(0)

SSG(P) (Join to see)
Edited 7 y ago
Posted 7 y ago
For decades now, NK/DPRK has made a living out of ratcheting up the tension/fear levels enough so that the international community gives them fuel oil and food (humanitarian aid) and things settle down until they need more humanitarian aid, and then the whole process begins anew. As was said before, they will agree to talks with the West, but then some little detail will derail the entire thing and the tension/fear and appeasement cycle begins anew. This game is not new, and anyone who does even a cursory study on the history of NK will see this pattern as clear as day.

As for their capabilities, they are irrelevant. In a purely military sense, they are much like the Soviet Army was... They could mobilize and get on the road very rapidly, but due to lack of logistical support and lack of maintenance, they could not operate for more than a day.

The truth of the entire thing is that they will never make the first move militarily. Why? Because the goal of the Kim family is to stay in power forever. Kim Il Sung and Kim Jong Il knew it, and now Kim Jong Un knows that any major aggression towards South Korea and/or the US means an immediate and permanent end to the family dynasty, the DPRK military, and the entirety of NK/DPRK. This is not in question. Thus, they may make a lot of threats, and do dumb stuff on their side of the DMZ, and even shoot missiles over Japan, but they will never step foot across the 38th Parallel. It's total suicide in every sense for the Kim family and the DPRK in general.

So when you get worried about North Korea starting a war, don't. It won't happen unless there is a military coup and a madman gets control of the country. It's all saber-rattling and political showmanship with some brinksmanship thrown in there. But the pattern is the same, and it is reliable as a Swiss watch.
(3)
Comment
(0)

SSgt (Join to see)
Posted 7 y ago
We do annual exercises with South Korea. Every year, DPRK claims it's an act of aggression. Same thing, different day.

The bigger issue is the human rights violations going on every day in DPRK. I highly recommend watching the PBS Frontline Story "The Secret State of North Korea." It is on Netflix.
(2)
Comment
(0)

PV2 Daniel Shipley
7 y
I will have to watch that.
(1)
Reply
(0)
Show More Comments
Read This Next
RallyPoint Home