Does anyone recognize these relatively rare branch insignia? 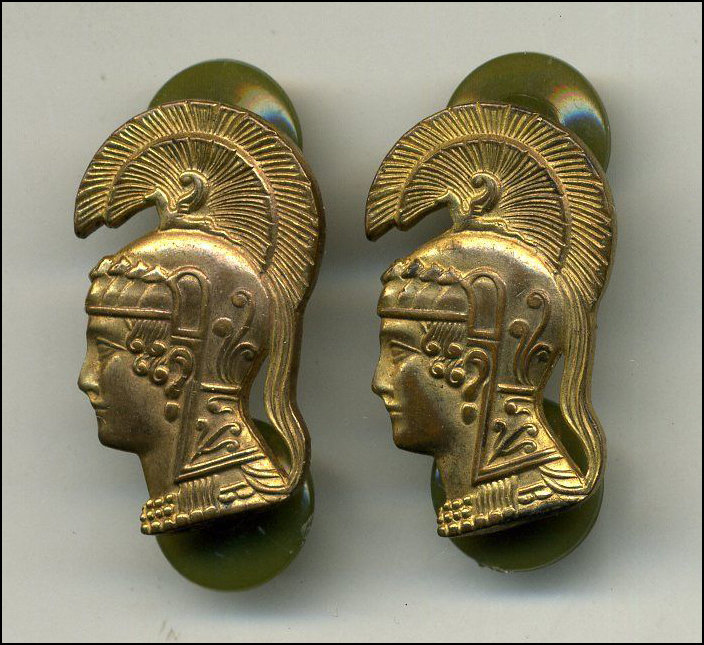 I always thought the WAC was a WWII organization . . . but I recently met a Vietnam ERA WAC on RP!!! :)

The WAC had its own branch insignia (the Bust of Pallas Athena) . . . worn by "Branch Immaterial" personnel (those unassigned to a Branch of Service). US Army policy decreed that technical and professional WAC personnel should wear their assigned Branch of Service insignia to reduce confusion.

The first WAC officer assigned to Vietnam in March 1962 was Major Anne Marie Doering. Two WAC advisors to the Vietnam Women's Army Forces Corps were next to arrive in January 1965 - Lt. Col. Kathleen I. Wilkes and master Sergeant Betty L. Adams. They were replaced annually. A WAC detachment with an average strength of 90 enlisted women was located at HQ, US Army, Vietnam, Long Binh, approximately 20 miles from Saigon. The detachment remained there from January 1967 until October 1972 when all US troops began to withdraw form Vietnam. Many enlisted women and WAC officers also served at General Westmoreland's headquarters in Saigon throughout this same period.

o https://www.youtube.com/watch?v=L-NI8JQW8bQ
Posted in these groups:

Because of my name (Jean -- French for John -- my mom is French), I have been mistaken for a female my entire life (kind-of like the "boy named Sue). We moved a lot, due to my being an Army brat, and, every time I started in a new school, I was always put in girls' PE classes, etc. (I always volunteered to stay and hand out towels in the showers). I was always scheduled to be housed with a girl's family on church trips, etc. (if the receiving folks assigned by names on a list). I got a pink box of toiletries from Procter and Gamble, instead of a blue box, as a freshman in college and, as a pledge, had to explain to the actives how I was going to use each item in the box, and I could go on and on.

The reason I mention all of this is that my friend, my compatriot, my sister-in-arms, COL Mary Maier submitted my name to the WAC Association and subscribed to the WAC Newsletter in my name. As such, every time I was on a promotion list, on a command list, or anything else, I was prominently heralded in the WAC Newsletter. Therefore, I am very familiar with that insignia, as many assumed that I used to wear them.
(8)
Comment
(0)

SFC William "Bill" Moore
>1 y
Sir, That is both frustrating and hilarious! As a former MP, I do remember hearing about COL Maier, I am not sure where it was, probably BN function. So, not only a fine commander, but one with a sense of humor!
(2)
Reply
(0)

She is now retired and living in Hawaii (rough life).

She claimed she had nothing to do with it and blamed it on LTC Vickie Longenecker, however, somebody else ratted her out. One thing they both did, which was hilarious, was to take an Army poster of how to wear the female Class A uniform and have a graphic artist change the face of the model with my face. It was awful, but funny.. :-)
(3)
Reply
(0)

How did you know . . . 37 years after the entire organization was completely disbanded?

SFC (Join to see)
>1 y
I like military history and obsolete insignia, the design caught my eye a while back.
(3)
Reply
(0)
Show More Comments
Read This Next
RallyPoint Home