Does VA 'Choice Card' really give veterans much choice? 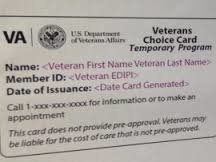 It was supposed to be one of the great fixes following the VA wait time scandal: A card that allowed veterans who had waited more than 30 days to get medical care from an outside provider. Now, it looks like more promises have been broken.

The Choice Card was part of a piece of legislation Congress passed just last year. Those choices in medical care were said to be especially useful for those who live long distances from the bigger medical centers like the Phoenix VA.

The whole point of the VA Choice Card was to give veterans like Joseph Dimeco, who spent 20 years in the U.S. Army, options in choosing their medical care.

"Can't get treatment at the VA because they don't provide, like for my legs," Dimeco explained. "I had lymphedema and I had to have the veins taken out."

The list of ailments he doesn't feel the Phoenix VA can treat continues.

"I have TBI and I have a sleep disorder that goes along with it," Dimeco explained.

He knows how he would use the card, however.

However, in nearly eight months, Dimeco hasn't used his card once. Although the card was designed to provide flexibility in veteran medical care, unless one lives at least 40 miles from a medical center or has a body of water or piece of land blocking their drive, they're not authorized to use it.

"Everyone I've met with a Choice Card, with the exception of about one or two, have actually been able to use the Choice Card," explained Matthew Dobson, local director for Concerned Veterans for America.

Dobson says problems with the card don't end there.

"The outside provider didn't get payment from the VA," Dobson said as he remembered one story of issues with someone who did use the card. "Now you are seeing veterans who are using the Choice Card and having their credit affected for medical debt."

Congress is expected next week to take up a "Chapter 2" of the VA Accountability Act that established the Choice Card. However, it's expected it will focus on giving the VA additional powers to fire poor performing managers, as well as provide protections for whistleblowers.

Sgt David G Duchesneau
Posted 7 y ago
Well, in my case it really does. At least I don't have to drive to Vermont or Massachusetts any more.
(5)
Comment
(0)

LCDR Rabbah Rona Matlow
Posted 7 y ago
I won't reveal names - they can if they choose to. I have helped veterans for whom the Choice card has been a huge fail. If you live in a remote area and the providers there have no info or training, they won't take it. Further, there are huge delays in getting care while waiting for authorizations.

The Choice card is also taking money away from VAMC's, which is resulting in worsening backlogs at many. This has also contributed to the VHA's huge budget shortfall this year...

Just another reason why vouchers are not a great idea...
(3)
Comment
(0)

Sgt Spencer Sikder
Posted 7 y ago
We have had only two experiences so far with this option. The first one we're receiving a bill for labs and when we called the "Tricare" contractor that VA is using to administer this program, the contractor indicated we weren't supposed to get a bill from the lab. Three days later, we get a statement from the Tricare contractor that we owe the lab the $115.00. Normally, we would go ballistic, but realize this is probably just a "systems" issue. Meaning that the process is electronic on the contractor's side and being that we're VA they have to do something manually to correct. If we get more bills in a couple of weeks, then I will get with the facility Director (my old Boss). If she ignores it, not a problem, I will put it on blast to the local and national news stations, Rally Point, and the elected officials on the House and Senate Veterans Affairs Committees. But I fully expect this isn't necessary.

The second one, no bills yet and none expected.
(2)
Comment
(0)
Show More Comments
Read This Next
RallyPoint Home