General Dempsey doubts the wisdom of a larger U.S. role in Iraq. Do you agree/disagree with him? Why? 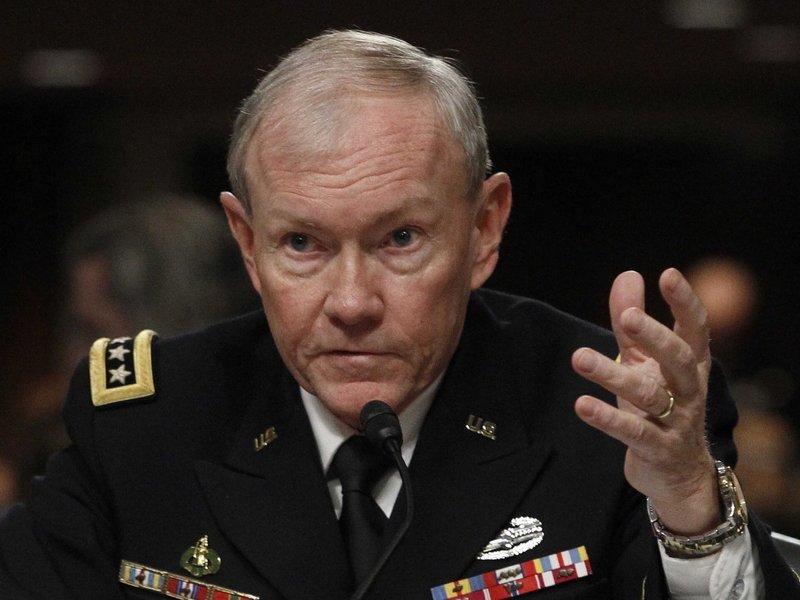 In the homestretch of a 41-year U.S. Army career shaped by war and the scars of war, Gen. Martin Dempsey sounds unconvinced that Iraq has found its path to lasting victory over the Islamic State group.

But neither does the top military adviser to President Obama say the threats to Iraq today justify sending American ground troops back into combat.

He counsels patience, for now.

Give the Iraqis more time to heal their internal divisions and fight their own battles. Resist the temptation to grab control of the contest against the Islamic State group. An enduring victory will take more than military might; it will require a unified Iraq supported by neighbors.

"If we were to take control of this campaign, I mean literally seize control of the campaign, then there's no doubt in my mind we would probably defeat ISIL on, let's say, a faster timeline, but at some considerable cost to our young men and women in uniform," he told U.S. troops Thursday in an aircraft hangar in Naples, Italy, on one of his last overseas trips before finishing his four-year tenure as chairman of the Joint Chiefs of Staff.

http://www.marinecorpstimes.com/story/military/2015/06/13/shaped-by-war-dempsey-doubts-wisdom-of-deep-us-role-in-iraq/71168848/
Posted in these groups:

MAJ Ken Landgren
Posted >1 y ago
Any COA we take, there will be pain for the friendly forces and civilians.
(4)
Comment
(0)
show previous comments

MAJ Ken Landgren
>1 y
Capt Waddell I will try give this a go. Here is a little background information. We gave freedom to people who hated each other for hundreds of years. In war I like to look at the Military Genius, Passion of the People, and the Rational Approach of the Government. You can apply this paradigm to the revolutionary war. Without the 3 we would have lost.

Let's apply this the Iraq. They have no Military Genius or Prowess. The military is essentially combat ineffective now. The passion of the people must be a swirling cauldron now. Isis which is Sunni is occupying Sunni towns, villages, and a city. That is one of their center of gravities, COG, or true strengths. As such, I believe that is the battlefield of their choosing as that is key terrain for many reasons. We all acknowledge how corrupt, inept, and discriminatory the Shia government has been to the Sunni, further impassioning them.

I doubt we have the political stomach to send in our infantry the towns and cities before the election, if at all, nor will we use total force on the cities. We have stopped arming the Kurds who are the best fighters of the loose coalition of forces around Iraq, probably because Turkey despises the Kurds. That leaves Syrians, maybe Iranians, Sunni militia, and the nutless Iraqi army to fight. Us vs Coalition does not look good.

ISIS is on the linear path of revolution (I am not saying they will be successful but its a natural progression for winning revolutions) as they have started small and are the size of an army now. There lies much of the problem. Cordon off avenues of approach and send the infantry in to kill the cancer, but as you alluded to, either COA sucks.

I would also like to mention we need to fight like the insurgents. I think we need new doctrine and relook COIN. We bring to the table a multi-billion dollar country making kit and fighting the insurgents becomes has to compete for resources. I would love to hear some thoughts.
(0)
Reply
(0)

Capt Seid Waddell
>1 y
MAJ Ken Landgren, sir, I agree with your analysis of the current problem, and would add a couple of points.

First, we had fought and won this battle against ISIS (then AQI) when their harsh treatment of the Sunnis turned the Sunnis against them; and ISIS is repeating that mistake.

Second, we had won the larger battle in Iraq and we were successfully transforming that country's government into a pluralistic body that included all factions; it was an ongoing process, but the Iraqi government had made great strides in that direction.

Third, it was our precipitous withdrawal that allowed the situation to degrade into the previous sectarian battles, and forced the Shia-dominated government to turn to Iran for protection, and to purge the government of Sunnis. General Odierno had asked for a residual force of 35,000 troops to continue our consolidation efforts, but was given 10,000 initially - and even these troops were soon withdrawn - leaving us with no influence over the Iraqi government.


It is difficult to lay this debacle at the feet of the Iraqis; they were new to the concept of an inclusive representative democracy, but were coming along fairly well. If you recall, the Sunnis boycotted the first election and then found their resulting lack of influence to be galling. They came around. The Sunnis had also driven AQI (now ISIS) out of Anbar Province with our assistance.

All of the progress we made there at great cost in blood and treasure was squandered by President Obama because he is ideologically opposed to the U.S. leadership role in the world, and he is ideologically disconnected from reality. With Obama, believing is seeing.

The way I see it, the current situation with ISIS is similar to the rise of Hitler in the 1930s; the problem is easier to deal with in its early stages than it will be when the enemy grows in strength and consolidates their power.

Delay through cowardice or fear today will greatly multiply the pain the world will go through in the near future. The longer we wait to take effective action the more difficult the problem becomes.
(2)
Reply
(0)

LCDR Rabbah Rona Matlow
>1 y
MAJ Ken Landgren Remember Georges Santayana's warning - those who do not learn from history are doomed to repeat it...
(1)
Reply
(0)

MAJ Ken Landgren
>1 y
LCDR Rabbah Rona Matlow - I agree. History is replete with insurgencies and counterinsurgencies we can learn from.
(2)
Reply
(0)

SCPO (Join to see)
Posted >1 y ago
Personally, and don't ask me to put a finger on why I feel this way, but Chairman JCS General Dempsey has never completely inspired me with any appreciable level of confidence in his "independence" from Obama. He has appeared too "puppet-like" on any number of critical military scenarios. Woefully, though, he is not the only one. But, to the question at hand, the word "quagmire' is now being used in relation to Iraq, and I could not agree more. In spite of my unashamed and unlimited respect for Bush 41 and Bush 43, I think a series of incomprehensible Pandora's Boxes have been inadvertently opened in that region of the world. My worst nightmare is that the world is looking at literally decades of endless sectarian war and uncontrollable terror acts around the globe. I have a great idea how to make a huge dent in the problems, but I don't know what good a multi-national parking lot would do for anyone clear over there!!!
(3)
Comment
(0)

Capt Seid Waddell
>1 y
SCPO (Join to see), agreed. However, the situation in Iraq was getting better until this administration pulled out and threw away everything that we had gained. It takes time to turn a situation like that around, train new leaders, and let the old hatreds die out over time. It cannot be accomplished in one or two American election cycles; it must be a long term commitment.

It is not clear that the American people are capable of that long range thinking any longer.
(2)
Reply
(0)

MSgt Mike Brown; MBTI-CP; MA, Ph.D.
Edited >1 y ago
Posted >1 y ago
I'm not a General, and do not pretend to know what is actually being discussed via a politically weak agenda. Seems to me that the Arabs via Iraq balanced the Persians... When we left, its obvious the vacuum created provided opportunities for Iran, Isis, and terrorists to occupy a shattered country. I have noticed these posting avoid the well-being and support of our only ally in the Middle East: Israel.
(3)
Comment
(0)

Capt Seid Waddell
>1 y
LTC Bink Romanick, considering this administrations actions towards Israel, can you blame them? Their very existence is on the line and Obama is tilting toward those bent on Israel's destruction.
(1)
Reply
(0)
Show More Comments
Read This Next
RallyPoint Home