Has the military gotten to far away from the Warrior Culture? 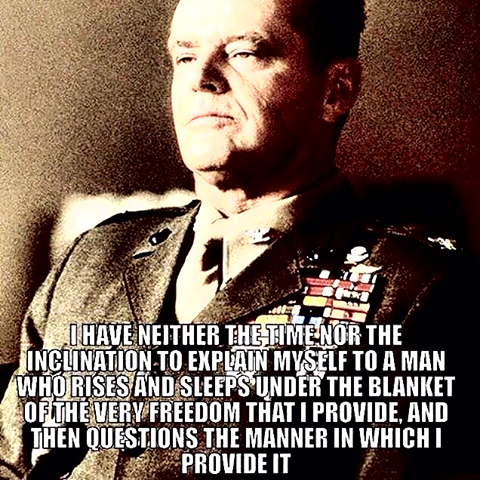 Should we have more leaders such as real- world Gen Patton and LtGen Puller and fictitious Col Jessup (A Few Good Men) and GySgt Tom Highway (Heartbreak Ridge) or have the days of "Rough men standing ready to do violence to the enemy" passed into history? Can there be an effective blend of "sensitivity for others" and "warrior ethos" without compromise of combat capability?
Posted in these groups:

1SG(P) (Join to see)
Posted >1 y ago
The character of Jessup's a poor example. He's supposed to represent the unethical and egomaniacal. But Nicholson's performance makes him seem a tragic hero. Too few remember the film's line about protecting those who can't protect themselves. There's better examples out there for your question. Jessup's not admirable, just cinematic.
(7)
Comment
(0)

1SG(P) (Join to see)
>1 y
Additionally, Jessup ordered a hazing, and when it was discovered, he tried to pin it on his subordinates to cover himself. He wasn't an ethical character.
(3)
Reply
(0)

1SG(P) (Join to see)
>1 y
I prefer neither. I'd look for an example of a mission oriented, ethical leader. They're out there. I'd rather do that than put a flawed fictional character on a pedestal. Just because you dislike one doesn't mean you must rush to embrace the other. Of course, that's how our country now finds itself in a choice of the least popular major party candidates in our history.
(1)
Reply
(0)

Capt Seid Waddell
Posted >1 y ago
Got to get rid of the PC culture first.
(7)
Comment
(0)
show previous comments

Col Val Finnell, MD, MPH
>1 y
I agree. Political correctness drives everything. The most egregious example is calling Nidal Hasan's murder of 13 people at Ft. Hood "workplace violence" instead of what it really was - jihad.
(1)
Reply
(0)

Capt Seid Waddell
>1 y
Col Val Finnell, MD, MPH, not to mention the structural PC that prevented his sympathetic views of suicide bombers expressed in conferences from being reported up the chain of command for fear of being seen as an Islamophobe.

"Officials also believed they lacked solid evidence that Hasan was unstable and were concerned they could be accused of discriminating against him because of his Islamic identity or views."

Hasan Called Himself 'Soldier of Allah' on Business Cards

The business cards were among numerous discoveries in Hasan's apartment of interest to investigators, who also are looking into whether Hasan wired money to Pakistan before last week's massacre

Col Val Finnell, MD, MPH
>1 y
Capt Seid Waddell - Yes, I know. Has an was my classmate at USUHS from 2007-2008. CDR Michael Jacobs and I objected to his presentations. We were told to "be sensitive" and listen.

I was at the trial in 2013 but Judge Osborn ruled that nothing could be used from his academic years.
(2)
Reply
(0)

Capt Seid Waddell
>1 y
Col Val Finnell, MD, MPH, it is like our Justice system is a suicide pact - along with the PC leadership in the military.

Thank you for speaking up though - not enough do.

This incident shows the corrosive effect of liberal/progressives in charge in Washington D.C. - elections have consequences
(1)
Reply
(0)

Cpl Mark A. Morris
Posted >1 y ago
As long as New Agers see the US military as a hand holding and song singing social experimental place. Not, a prepare to fight and win war place. There is very little room for real men. But, don't worry MSgt, after this election the PC nonsense should be over and we can get back to being Americans. Not globalists.
M. Morris RVT
(5)
Comment
(0)
Show More Comments
Read This Next
RallyPoint Home