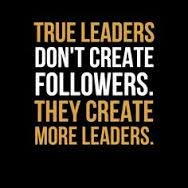 Leadership is more than being in charge and managing people. Leadership that separates good leaders from great leaders, is leadership that builds other leaders!

2. Instead of telling an employee what to do, create their responsibilities and metrics of success with them.

3. Leadership takes time to develop. You must invest your time to train employees to be leaders. You must also give them the space and time to make mistakes while they’re on their way to being a leader.

SFC Zach K.
Posted >1 y ago
Are Leaders born or are Leaders made? Some people have a god given ability to communicate to people. The Army defines Leadership as the ability to provide purpose, direction, and motivation to accomplish a task or goal. That doesn't not necessarily define great Leadership though, as Hitler would have qualified according to those standards. Understanding where you came from and knowing what those Leaders did to cultivate you provides a little insight on what is needed to be successful. I had great Leaders and they were lifelong learners. There was always a quest for more knowledge and knowhow with a strong dash of humanity and understanding. I felt like family, and I was treated like family. I don't think it's entirely complicated. You treat Soldiers like adults and demand the best from them because they owe it to themselves. They need to understand that you will always stand by them, and that they are doing it for the Team as much as they should be doing it for themselves. Simple wife, simple life logic. I am happy when they are happy, and they need to know that I am fiercely loyal to them. We are not entirely successful because a Leader is great. A Leader is great when his team is successful. What a complex question.
(14)
Comment
(0)

COL Mikel J. Burroughs
>1 y
SFC Zach K. It is a complex question that can be answered in many different ways and there are a lot of different opinions, but that is what makes RallyPoint to interesting. Getting all the diferent perspectives and feedback is awesome. Thanks for your input and feedback! Usually in a dictatorship the Leader is trying to create more followers (like Hitler). He wasn't really trying to build new Leaders that would take over after he was gone - just my opinion! The great leaders are constantly surrounding themselves with potential leaders that can take their place in a moments notice in my opinion and they are developing them for the next level of leadership.
(3)
Reply
(0)

SSG William Egan
>1 y
WELL.... I THINK A LITTLE OF BOTH. I HAVE A TWIN BROTHER AND WHEN I BECAME AN ADULT SHE MADE A COMMENT. SHE WAS ALWAYS WORRIED ABOUT MY BROTHER FOLLOWING SOMEONE DOWN A WRONG PATH BUT NEVER WORRIED ABOUT ME. I WAS NEVER GOING TO FOLLOW ANYONE TO HELL, I MIGHT LEAD THEM THERE BUT I WAS NOT GOING TO FOLLOW...

SOME ARE BORN TO LEAD AND OTHER CAN LEARN, BUT THE UNDRSTANDING AND LEARNING WILL MAKE YOU EVEN BETTER AS A LEADER EVEN IF YOU ALREADY HAVE THE NATURAL ABILITY. SURROUND YOURSELF WITH GOOD MENTORS.
(1)
Reply
(0)

SFC (Join to see)
4 y
I could not agree more, most leaders are born with purpose and direction.
(0)
Reply
(0)

SFC James J. Palmer IV aka "JP4"
Posted >1 y ago
Have you ever heard of becoming a product of your environment? That's very real. Bad or Good.

For me it's, setting a good, professional, and fun environment that promotes mission accomplishment and leader development. If you set this pattern long enough, it will become automatic to those we train to replace us. I have a blast every single day at work and the mission gets done my people sometimes look at me like I'm crazy though.

Capt Daniel Goodman
Posted >1 y ago
The greatest leader I was ever privileged to know personally, albeit to a very small extent, was the commander of my unit, with whom I'd been allowed to chat at one point for nearly an hour when I'd been in, back when dinos roamed the Pleistocene, lol. I found out later he flew over something like 174 combat missions in Vietnam in an OV-10 Bronco, that light tail mounted turboprop aircraft depicted in the gene Hackman Danny Glover film bat 21, if any of you have seen it, a true story. The commander of my unit had given me an appreciation plaque that day, which is indelibly etched in my memory, for some work I'd done, which, candidly, and truthfully, I genuinely hadn't expected, in all honesty. I only recall the almost overawing sheer raw emotional power of the man, and the way he helped me, in speaking with him, to be, I think, genuinely all the better for having been able to speak with him at such length. He'd been a Col when I'd met him, though he'd been approved for BGen, and was just waiting for his pin-on date, the day all that happened.Thee PMS and Assoc PMS of my prior army ROTC unit, as I'd initially been slated to go army, rather than, as happened later on, USAF, had also been Vietnam war heroes, the PMS had given me an award for the AUSA-US Army ROTC for military history for a paper I did for him on wargaming, they, too, profoundly influenced me, many times. I'd also been able, once, while at USAF OTS then at Lackland, before Maxwell, to actually see, and ask a couple of questions of, one of the Apollo astronauts, who'd been invited to chat with us by the USAF OTS commandant, also a most impressive man, who was evidently a personal friend of his. I was also much affected by both of the USAF OTS flight commanders whom supervised me while I went through the program there, I was recycled once. I'd also been allowed, while in army ROTC, to go up to West point for drills with my unit, rappelling on the cliff there, as well as staying in the barracks with the cadets sevl times, and to eat with them in the famous dining hall where Gregory Peck had re-enacted the speech by Gen MacArthur in the film about him. I just thought you might all find that useful by way of some insights , hope was of interest, be eager for any thoughts, many thanks.
(5)
Comment
(0)

LTC Greg Henning
>1 y
There is always one commander that stands out over the rest. Excellent comments!
(1)
Reply
(0)

Capt Daniel Goodman
>1 y
Much appreciated, of course, many thanks.
(1)
Reply
(0)
Show More Comments
Read This Next
RallyPoint Home