"In Fort Benning, US Army Shuts Down Misogynist Trolls" 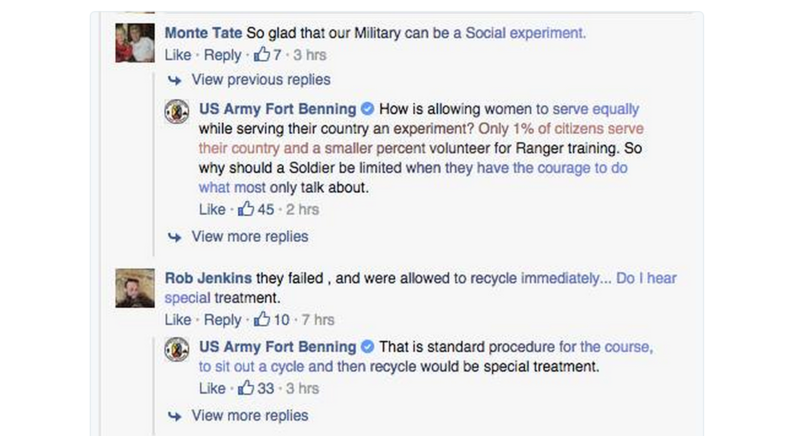 This coming Friday, two female lieutenants will become the first women to graduate from the US Army's grueling Ranger program—an honor that requires all candidates to complete an intense, 62-day training course at Fort Benning in Georgia.

Training includes running at least five miles several times a week, swimming for miles in a combat uniform, finishing a 15-mile march carrying a 65-pound pack, and doing an astonishing number of push-ups in two minutes. Women had been historically excluded from Ranger school because it was thought they lacked the strength and stamina to complete the program.

Like clockwork, Kristen Griest and Shaye Haver's history-making achievements have prompted skeptics to question whether their training might have been tweaked to defer to their feminine frailties. Did Griest and Hayer receive favorable treatment? Is the whole thing just some politically correct publicity stunt?

Thankfully, the individual behind the US Army Fort Benning's Facebook account is proving to be quite the dauntless social media staffer, expertly shutting down the misogynist trolls who have been commenting on the page.

http://www.motherjones.com/mixed-media/2015/08/us-army-fort-benning-shuts-down-misogynist-trolls
Posted in these groups:

SFC Stephen King
Posted >1 y ago
What do you call Soldiers who complete Ranger Training?

RANGERS regardless of gender great job to all.
(21)
Comment
(1)
show previous comments

SGT Felicia King
>1 y
CPT (Join to see) - I understand your take, but isn't there other Ranger Regiments other than the 75th? The 75th is at Benning, and they also have other Ranger units elsewhere, don't they?
(0)
Reply
(0)

CPT (Join to see)
>1 y
SGT Felicia King - No, there is on one Regiment. There are 3 Batts, one at Benning, one at Savannah and one at JBLM. Also to mention your other comment, the Regiment is elite; graduation from Ranger school does not make you a Ranger; getting through Assessment & Selection does. Hell, I'd love to get the opportunty for either, but as a 65b I realize that's just not going to happen.
(0)
Reply
(0)

SGT Felicia King
>1 y
Thanks for the explanation. I know Rangers are an elite group, I was just teasing. But I thought they didn't go through a selection. I know that you can pass SF selection, but not get selected, therefore you are not Special Forces. I wasn't sure if Rangers were the same way. I figured I'd ask being that they're in the news all the time because of the females. I thought there were other Ranger units, but I guess just in Georgia.
(0)
Reply
(0)

SGT S Sharpless
Posted >1 y ago
Correction: The two females are not both Lieutenants. One is a Captain and the other is a Lieutenant.
(7)
Comment
(0)