Is it appropriate to confront a higher rank when they are blatantly disregarding regs? 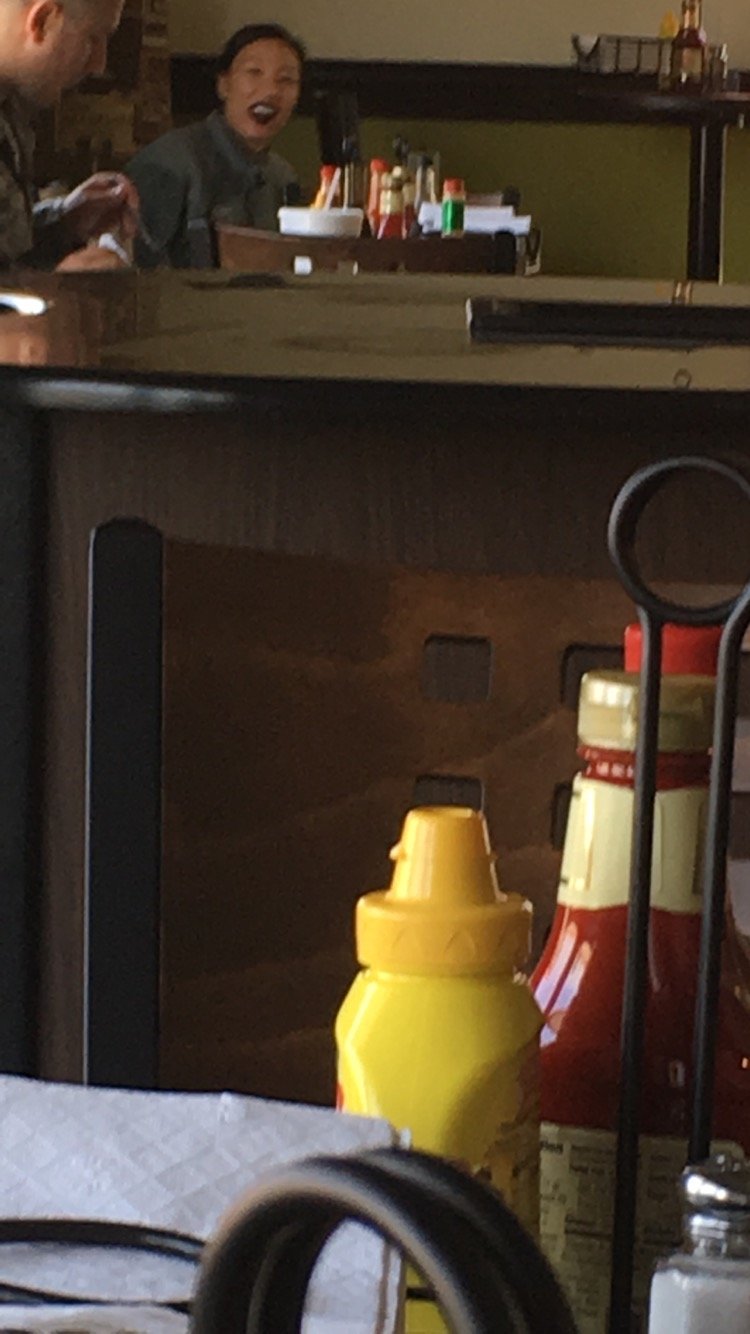 So last week I was at the chow hall with another girl from my squadron, and we see this SSgt wearing nearly black lipstick across the room. This is very obviously out of regs as makeup is to be conservative and lipstick can not contrast with your skin tone. She was obviously a higher rank than me or the airman I went to chow with, and neither of us said anything even though both of us desperately wanted to. She looked ridiculous. It was so bad that some male airmen at the table next to us noticed it and asked us about the reg. Anyway my question is, is it appropriate to confront a higher rank when they are blatantly disregarding regs?

PS There was a visiting 2 star across the chow hall at the time
PPS Sorry the pictures are so bad. We were far away.
Posted in these groups:

CSM Stuart C. O'Black
Edited 5 y ago
Posted 5 y ago
Absolutely, just use tact. Or another way to go about it and just make it into a question. Like "SGT I was told we can not wear lipstick like that. Did the regulations change or something?"
I was jacked up one day with my uniform and about two hours into the day a PFC walked up and said "CSM can I ask you a question in private." He told me what was jacked up on my uniform. I was mad no one else squared me away sooner. So I gave him a coin and asked the Frist Sergeant walking around with me the past hour why no one else had enough nerve to tell me. NCOs should realize they are being looked at as the standard bearers at all times and should expected to get called out if they are jacked up!
(518)
Comment
(0)
show previous comments

MAJ Pete Joplin
4 mo
Sgt Floyd Carmichael - I hated those five words, and anyone who ever used them learned very quickly to never use them in my presence. I much preferred Soldiers simply state their position without the bullshit, which is the much more respectful method in the first place. That phrase was created by some ignorant shithouse lawyer, who though that it meant something, and that it was like a protective invisibility cloak. In my 24 years, every time anyone uttered that phrase, I knew immediately that their next words were going to be disrespectful, so I would lean in real close and say, "listen here Trooper, those words don't amount to respect, so you are free to respectfully say what you have to say, without using that phrase to me ever again." Soldiers seemed actually relieved to be rid of that stupid line.
(1)
Reply
(0)

SSG Bob Teachout
3 mo
CSM O'Black , I would be proud to serve with you in any command! Outstanding answer.
(2)
Reply
(0)

CW3 (Join to see)
2 mo
CPL Wilfred Roberge - Buzz cuts and no makeup? I'd really like to say that's the dumbest thing I ever heard, but sadly, it's not. I've worked with some real "winners' in my career. It is up there, though.
(1)
Reply
(0)

SSG Bill McCoy
2 mo
SFC Michael D. - You're right - treating Privates with respect actually shows that you care. I once had a Navy Chief smoke me when I was in Navy Basic. Even though it was Basic (Boot Camp), his whole approach was beyond how even recruits should've been treated. I never forgot how I felt ... later, as an Army MP, when stopping ANYONE including Privates (typically a traffic stop, sometimes not), I'd refer to anyone as, "sir," or "m'am." When a young private was obviously afraid (for whatever reason), once I got their ID and driver's license, I'd refer to them by their FIRST name. "Jerry, do you know why you were pulled over?" Usually you could see them relax - they were being treated with respect, and as needed, some CASUAL contact. Most of the time I'd only give a warning ticket to them, saying, "Okay, this is a warning ticket only. You will NOT receive any additional flack so don't do the same thing again, Private XYZ."
I know being an MP is different than performing only duty as an NCO. Either way, respect and voice tone is the key - we ALL know how, or should know how to be hard-ass when it's appropriate, but otherwise junior enlisted deserve respect as much as any NCO or officer. And no, I never addressed any NCO or officer by their first name! LOL A Major's wife, insisted that I salute her. I replied, Well Mrs. Whatever, if your husband comes to the station, I'll salute him.
(0)
Reply
(0)

LTC Joseph Gross
Posted 5 y ago
You have a duty to correct deficiencies whenever you see them. Use tact with superiors. Don't confront in front of others and be respectful, but don't waiver.
(227)
Comment
(0)
show previous comments

SGT Christopher Helvie
7 mo
1SG (Join to see) - Depends if the Soldier simply oopsed like an upside rank or such, I would chew them out if they didn't have or something of that nature. But a simple mistake is like, ' here, you need to fix this' end of story.
(0)
Reply
(0)

SSG Bill McCoy
2 mo
MAJ Ronald Mandell - Agree; EXCEPT for the saying it's a "turn on." That's begging for an EEO sexual harassment complaint. My guess is you probably meant to suggest saying, "It's attractive, BUT ..."
(0)
Reply
(0)

MAJ Ronald Mandell
2 mo
LCDR Michael Pumilia - Of course, my reply was assuming that I was junior in rank to the SSG as was the case with the person who posed the original question, and you are correct, “attractive” would have been a much better choice of words on my part.
(0)
Reply
(0)

SPC (Join to see)
Posted 5 y ago
You should absolutely make an on-the-spot correction. Here's my quick list of do's and dont's:

DO:
-Be respectful. Whether you're correcting a superior or a subordinate, always be polite, professional, and tactful. More often than not, it's typically senior leaders "shaming" soldiers rather than or in addition to correcting them. We've all been corrected before, because we've all been wrong. Be mindful of how it made you feel when someone corrected you privately versus embarrassed you publicly.
-Be right. If you're going to make an on-the-spot correction, have your regulation ready on your smart phone or in your hand. Be aware that sometimes, MILPER messages can sometimes modify or update rules and regulations before they hit the books.
-Be squared away. Don't throw stones in glass houses, so they say. The same goes for making corrections. It doesn't do you any good to point out someone else's deficiencies when you yourself are jacked up.

DON'T:
-Remain silent. If you yourself are not comfortable making the correction, or are unsure of whether or not it's wrong, ask. Ask a superior, a battle buddy, or even ask the individual you're considering correcting. Plenty of people have phrased it here extremely well: simply saying "Excuse me, I was wondering if we were authorized to..." can often initiate a professional dialogue.
-Make a scene. If you're in a public place, ask to speak privately with the individual, or wait for a more private opportunity. Remember, you're trying to make a correction, not embarrass someone.
-Be prideful. If you're mistaken, take your licks and continue mission. I and many others like me have made what we thought was a correction, only to learn we were mistaken. It happens, but it's not the end of the world. At the end of the day, someone learns something.

Ultimately, remember this: you are making a correction to improve the military culture. Enforcing standards improves our organization and keeps it running well. Embarrassing people damages our camaraderie and divides us. Anyone in the military who gives a damn about keeping up standards will thank you for the correction, and anyone who gets angry with you for pointing out a deficiency probably has a problem that goes far deeper than their lipstick color.
(154)
Comment
(0)
show previous comments

MAJ Ronald Mandell
11 mo
SSG Gregg Mourizen - I agree with you. It’s a hurtful thing to have to just suck up, and take, but you made the right decision when you bit your lip, and walked away.
(0)
Reply
(0)

MSgt (Join to see)
10 mo
My wife and I were having lunch at the Burger King, on Post. I noticed a young lieutenant had her Training Group patch on her right sleeve. As we were leaving, I ambled over to the table where she, and a SSgt. were eating. I politely told her she was 'bass-ackwards' as I was criss-crossing my hands to my shoulders. She looked down and saw her faux-pas and corrected herself, as she thanked me. The SSgt. was laughing out loud, and I looked at him, and asked, "Why didn't you catch it, Sarge? That's our job; keeping The Brass out of trouble..."
(12)
Reply
(0)

MSG (Join to see)
10 mo
MAJ Ronald Mandell - Especially when You don't know what to political say anymore, any kind of common language can insult anyone and Its up to the person receiving the complaint to decide if it was wrong.
(1)
Reply
(0)

PO2 Carl Robinson
7 mo
I think being in service and gaining rank should reflect your value. I was a Navy Corpsman and I felt undervalued even though I went above and beyond. I was totally clinical, working in the open heart surgical suite which could be long days. Didn't really care about rank, cared about patient outcomes. I only stayed to the end of my second enlistment because of this. There are many who work, not for rank, but rather for respect and being evaluated fairly for their work, which should be decided in part by the people you work with. There was only one time I was addressed about something, and it completely disregarded all the extra time and attention to duty I put in with call, working on a weekend if needed. I put in for a school as a Cardio/Pulmonary tech which I helped to teach, and was denied three times. They gave it to an OR Tech who never wanted to work in the heart room or with cardiovascular cases. I only saw the Master Chief of the Command once and the detailers once. I left the Navy because of this. I worked in the Civilian world after challenging the National Exam and passing, making $65K per year.
(2)
Reply
(0)
Show More Comments
Read This Next
RallyPoint Home