Is our National Anthem racist? 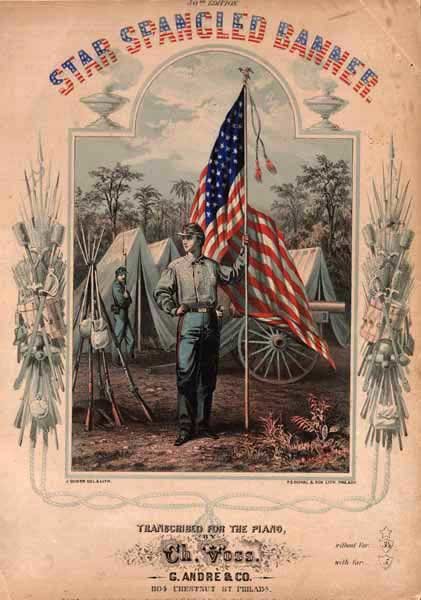 Progression--progress--is a constant struggle. We recognize that, as a species, we are fallible. It is the history of mankind, regardless of race, ethnicity, or religion. As we progress toward an ideal, be it "Land of the free, home of the brave," or "Liberty and justice for all," or "All men are created equal," or "Liberté, égalité, fraternité," we will always be beset by regression, through our own frailty, distrust, bigotry, &c.

Some studies have suggested that we are wired, from the time we are born, to learn which faces to trust--our parents who look like us and protect us--and who not to trust--strangers who don't look like us. Thus our progressive struggle to be inclusive, accepting, diverse, and trustful of those who don't look like us, talk like us, or worship like us, is, in fact, an internal struggle against our most basic human makeup, a genetic protective mechanism evolved within us over millennia. We literally are wired to be bigoted.

If I were a child psychologist I would include a link to Stranger Anxiety. I'm a historian, so following is a link to a historical look at our ongoing debate over our National Anthem.

For the record, my upbringing has wired me to look with disdain at any American who doesn't stand during the National Anthem. It's just who I am, and I'm getting too damn old to change.

SFC Mark Merino
Posted 6 y ago
Absolutely, 100%, not racist. That being said, when people look for racism everywhere, they will find it everywhere. George Washington is now being demonized because he owned slaves. Therefore, everything he did no longer has any merit. The problem with that insanely narrow point of view is that it isn't fair to judge anything hundreds of years ago based on modern day laws. Strike that. It is very possible to do that when people hang onto past injustices from centuries past that didn't even involve them. How far back in time should we go to get the proper baseline for being angry? Do issues ever get put to rest or do we cling onto them decade after decade because that gives us the entitlements that come with being a victim of society? OUR National Anthem was brought about by the heroics of our ancestors who could have surrendered to a vastly superior foreign fighting force, but chose to meet their fates with iron will. Old Glory didn't just continue to fly because the British were such lousy shots. People made of flesh and blood died repeatedly trying to make the necessary repairs so that the flag would stay unfurled in all her glory. They didn't cower behind the ramparts,they died in the open struggling to keep that flag visibly flying to those outside the fort. Racist?! You want to know the skin color of those inside the fort, or who owned slaves when that was the law of the land? How pathetic that this issue even has to be discussed. People need to wrap themselves in the flag before they burn it. I was born here, I spent my life defending this nation and serving others who came before me and after me. This country owes me NOTHING. I owe this country EVERYTHING.
(106)
Comment
(0)
show previous comments

SN Kristi Kalis
3 y
PO2 Sam Tkach - I know history and the battle that was the point of the song. Those slaves were fighting for their freedom from the slave owners, like Key. Did you read anything I wrote? Key considered them property, inferior, cowards, etc. Why would they fight for him? They fought against their known enemies (slave owners like Key) in the hope that the British would allow them to be equal and free men.

"ENEMY? What is enemy? You killing my own people so many miles from your home. We not the enemy! You the enemy! My mother is dead. And my older brother, who be 29 years old, he dead! Shot by Americans! My neighbor, dead! His wife, dead. WHY? Because we're not human to them!" - Good Morning Vietnam
(2)
Reply
(0)

PO2 Sam Tkach
3 y
SN Kristi Kalis - I don't understand why Colonial Marines would fight for the British who considered them also inferior? Look how their treated Black Caribbean people under their colonization period until it ended in the 1960s and the 1970s. I see your point on the War of 1812 being an unjust war just like the Vietnam War. Based on what I studied about it, I came to conclusion that it was unreasonable for us to enter it. Key was one of those War Hawks, so I would not agree with his views not only on slavery but also on the war itself. But, our national anthem is not about glorifying both these things, it's about glorifying the United States.
(2)
Reply
(0)

SN Kristi Kalis
3 y
PO2 Sam Tkach - The Corps of Colonial Marines had far more freedom under the British than they did under the Confederacy or the Colonists. And this song was NOT our national anthem at the time it was written or long into the future after it was written. (Not until 1931) Many people were put off by the fact Key's poem was set to the tune of an old British drinking song. "America the Beautiful" was used before 1931 as the anthem in most cases.
(1)
Reply
(0)

SPC Michael Tucker
3 y
Well said. I love to hear that there are others out there that share the same feelings as I do!!!!
(1)
Reply
(0)

SGT David T.
Posted 6 y ago
The analysis presented is flawed. They are overlapping the author with the work itself. Key was a slave owning ardent anti-abolitionist. This is not disputed. It is however, irrelevant to his poem. He was talking about what he was seeing during the shelling of Fort McHenry. The 3rd verse which talks about the hireling (no skill menial labor) and the slave is referring to the non military people in the fort itself and not the Colonial Marines. The British fleet was in little to no danger from the fort so why would he say that a British unit was not safe? This makes no sense in the context of the siege. He was referring to the danger inside of the fort and no one was safe. By all accounts, the British shelling of the fort was very intense. This is what Key was talking about. His poem was not talking about the institution of slavery at all. It was referring to what he saw on a particular night and not his views on slavery.
(59)
Comment
(0)
show previous comments

SGT Charles Bartell
3 y
PFC Terrance Smith - Look at his scorch a left wing rag. I was wondering about it so I reed a few of its news stories they all have a left wing slant.
(0)
Reply
(0)

MCPO Roger Collins
Posted 6 y ago
Everything is racist to someone.
(47)
Comment
(0)
show previous comments

MSgt J D McKee
3 y
TSgt Robert Hayes - I see your point. Actually, your post made me remember having been taught just about exactly what you said somewhere very early in school, probably the first grade. Which was in 1959, so I may have disremembered... I'm going to leave my original reply though, because I don't believe in rewriting history.
(3)
Reply
(0)

SSG William Kimbrell
3 y
The only person that you can tell what their thoughts are , are your own.
(1)
Reply
(0)

SGT Charles Bartell
3 y
Just like every will cause cancer too.
some people are just stupid.
(0)
Reply
(0)

SGT Martha Cain
>1 y
Political correctness has its place, but I believe, in my "forever military heart" our National, Military Service ; all branches, is not one of them. America~ the beautiful breathed its first free breath, as a Agrarian, slave dependent economy. The framers of our Constitution were slave holders. Our first General of our first Army ; who became our first President~held slaves...Slavery became openly, morally reprehensible but ultimately a contentious issue then &~to this very day.
(1)
Reply
(0)
Show More Comments
Read This Next
RallyPoint Home