It appears the first two females at Ranger School might graduate soon. What questions does this answer? 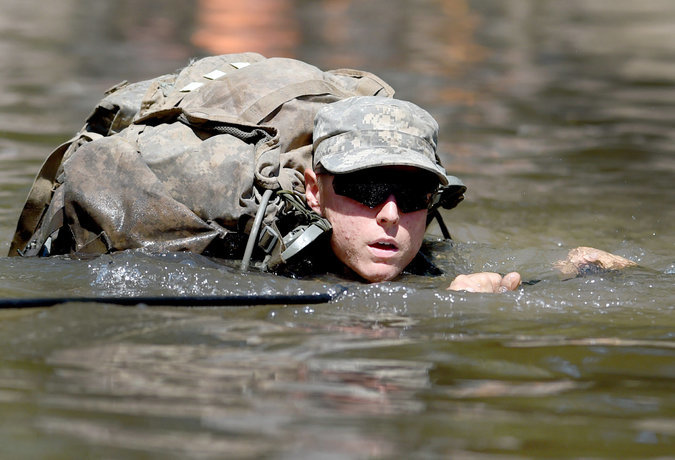 If you have been to Ranger School, you well know, once you get to Florida, you are pretty much done... so long as you can pass one patrol, and you don't get hurt; home stretch for 17 days...

It appears, the first two women (ever) will soon graduate and receive their well earned Ranger Tab... No easy task for anyone... to say the least. Will this answer the Army's question of should/can women serve in direct combat MOSs? Remember, anyone from any MOS can go to Ranger School. We have yet to have women attend Infantry or Armor OSUT/BOLC. Should that not be the pilot?

Clearly, if a woman can complete Ranger School.... Infantry OSUT/BLOC would be easy.

- Colonel Fivecoat (Commander Ranger Training Brigade) would not say whether he supported women serving in the infantry because he did not want to get out in front of his own commanders. But allowing them to attend Ranger School was a no-brainer. “Why would you not want them to get this training, so they can be the best they can possibly be?”

http://www.nytimes.com/2015/08/08/us/women-in-army-ranger-school-move-a-step-closer-to-combat.html?_r=1
Posted in these groups:

SFC (Join to see)
Posted 5 y ago
It answers one question- That these two Soldiers displayed the motivation, determination, and ability to complete grueling and rigorous training. It's time to stop thinking in gender, and focus on Soldier.
(17)
Comment
(0)

SCPO (Join to see)
5 y
I agree. The ONLY question it answers is that TWO women were physically, mentally, and emotionally capable to withstand the intense rigors of Ranger training. We already know that ten of thousands of very capable men failed miserably before them, and will continue to do so after these two women presumably graduate. I'd say that means the odds of the percentage of women passing future training sessions, whether BUDs, Rangers, or Delta, will almost certainly remain the same...thereby, answering the same question in the same manner if and/or when asked again.
(1)
Reply
(0)

CPT (Join to see)
5 y
Your right. They shouldn't have got any more training than their male counterparts. That is sexist for the them to think they couldn't hack it just like a male soldiers.
(0)
Reply
(0)

SPC (Join to see)
Posted 5 y ago
As long as the standards for them were not lowered, I have no issues with it. Otherwise, the system is just cheating them, and eventually it will cause additional fatalities which could have been avoided.

In real life combat situations, there is no "easy way" without consequences!
(8)
Comment
(0)
show previous comments

LCDR T.J. Smith
2 y
MAJ John Douglas - Women make up a significant and important part of our military and fighting strength. What you wrote is unnecessary and insulting. Embrace their strengths and quit being a debbie downer.
(0)
Reply
(0)

MAJ John Douglas
2 y
LCDR T.J. Smith - Maybe heavy lifting is not needed in the Navy or Coast Guard, it is in the Infantry, Armor and Artillery. Maybe you never saw a crew of four young men struggling to repair a tank track (tread) in a mud hole in the middle of nowhere and all the extreme physical strength it takes? Maybe you never saw an artillery crew have to lift heavy projectiles to load a cannon? Maybe you never had to serve in a very remote outpost free of any modern conveniences for weeks on end? Maybe you have heard the NFL and NBA clamoring for female players? I haven't and for good reason. Maybe you need to rethink your ideas and focus more on winning battles than creating left wing social experiments designed to degrade and destroy unit cohesion.
(0)
Reply
(0)

General Robert H. Barrow, 27th Commandant of the Marine Corps testimony before the SASC on Women in Combat. June 1991.

You *ass*umed that I don't understand the requirements for strength in some jobs. If you would have looked at my profile you would have noticed that I started my military service as a Marine and a combat engineer. Yes, strength required. Ever put together a prefab steel bridge or a landing platform for Harriers? Ever spend a day pouring concrete. I've been there- in the desert, under fire, digging fighting positions in terrain where even the pick ass would simply bounce off of.

BTW- I never, nor will ever I advocate for women in combat arms units. Just as General Robert H. Barrows says here:

No need for women in combat. No requirement, no need. Sorry ladies. My original comments still apply.

1LT Jack Charrin
6 mo
Women are being sent to Ranger School to meet some politically correct statement, not for any Army "needs." No other Special Ops services have this special training available to women. Why the US Army?
(0)
Reply
(0)

SPC George Rudenko
Posted 5 y ago
Rangers lead the way.  And I think it's great. I've seen girls in combat and as cops out perform and outHEART men.
(7)
Comment
(0)