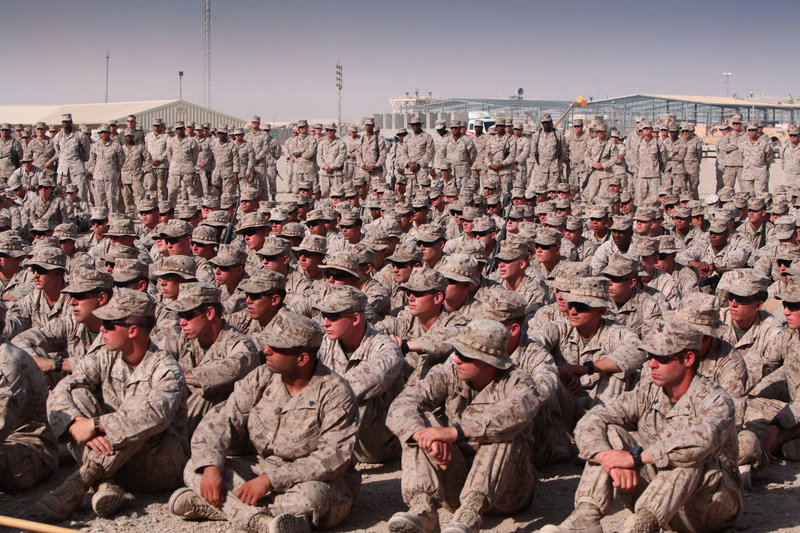 Originally published on military1.com:
--
KANSAS CITY, Kan. — The capstone to Maj. Fred Galvin's career was the command of the Marine Corps' first-ever special operations unit. He led the elite company into Afghanistan in February 2007.

But less than a month after Fox Company arrived in eastern Afghanistan, Galvin was engulfed in scandal. His unit was accused of firing indiscriminately after a car bomb attack on March 4, killing up to 19 Afghan civilians and wounding 50 more.

Galvin and his men were cleared in court a year later of any responsibility after testimony by more than 50 witnesses. The three-officer jury concluded that the two officers and their Marines "acted appropriately and in accordance with the rules of engagement ... in response to a complex attack."

But Galvin says his and the unit's reputation remains stained by accusations that they killed innocent civilians. He has struggled over the past eight years to clear the names of the 29 Marines on the 2007 patrol.

Galvin, who retired from active duty last year, says he is speaking out now to make sure another unit doesn't experience what he said was the military's rush to judgment in response to intense political pressure to reduce civilian casualties.

The Marines were called into an office one a time and interrogated for hours, with no Miranda warnings and no access to lawyers, Galvin says. They were held incommunicado for days. They were publicly condemned by top military commanders.

"We weren't just abandoned — they tried to destroy us," he said recently near his Kansas City home, his hand resting on a file box containing thousands of pages of documents from the case.

"To this day, I encounter people, including Marines, who say we got away with murder," he said. "We'll take this to the grave."

Galvin, 45, still maintains a rigid military bearing as he builds a new life, working toward an MBA. He has become obsessed with the case, filing Freedom of Information requests, assembling thousands of pages of documents and writing a bitter, book-length account.

The accusations of civilian casualties effectively ended Galvin's career. He was never promoted and said he was steered into dead-end jobs until he decided to retire after 27 years.

In Galvin's view, Fox Company is a case study in the consequences of political pressures in an unpopular war. The U.S. military in 2007 was committed to a counter-insurgency strategy that stressed protecting Afghan civilians. Building trust and confidence with local Afghans was viewed as more important than killing insurgents.

Galvin's unit had been in Afghanistan for just a month when a platoon convoy was hit by a suicide bomber. Galvin was riding in a Humvee at the rear and saw an orange fireball rise hundreds of feet into the air.

In an instant, gunshots rang out from both sides of the road, he recalled. Galvin said his Marines opened fire, disabling a Toyota SUV speeding towards them. In five minutes, Galvin believed his men had killed six to 10 combatants.

The Marines drove back to their base in Jalalabad. Thankful to be alive, Galvin received the shock of his career: The BBC was reporting that the Marines had just killed 10 Afghan civilians.

By the end of the day, news reports quoting Afghan officials and villagers said some Marines were drunk and had shot wildly at civilians. They were accused of barging into homes to shoot inhabitants.

A month after the attack, Galvin was relieved of command. He and six other Marines on the convoy were investigated for negligent homicide and dereliction of duty.

"After that, we were radioactive," Galvin said. "These traditions — never leave a Marine behind — well, they left us behind."

Retired Marine Col. Steven Morgan, one of three officers on a Marine jury that exonerated the unit, said in an interview: "These Marines still have this black mark on them that never should have been there. It's an ugly story and it makes me angry."

Lt. Gen. Frank Kearney, head of U.S. Special Operations Command-Central Command, said six weeks after the shootings that there was no evidence of insurgents among 10 dead and 33 wounded Afghans. Kearney had ordered Fox Company removed from Afghanistan six days after the attack.

Two months after the attack — with a military investigation still underway — the top U.S. Army commander in the region, Col. John Nicholson, told Afghan elders that he was "deeply, deeply ashamed and terribly sorry that Americans have killed and wounded innocent Afghan people." He called the killings a "terrible, terrible mistake" and "a stain on our honor."

Nicholson said he paid up to $2,000 each in condolence payments to families of 17 Afghan civilians he said were among 19 killed by the Marines.

Retired Marine Capt. Vince Noble, Galvin's deputy and the commander of the patrol, said the military command buckled to political pressures and abandoned its own men.

"I still ask myself: How could the military turn against its own like that?" said Noble, who now works in law enforcement in New York.

The unit was denied combat ribbons. Sgt. Joshua Henderson, a Marine wounded in the car bombing, was denied a Purple Heart.

Galvin and the six other Marines were hauled before a Court of Inquiry at Camp Lejeune, N.C., in early 2008 — the first such Marine court since 1956. During the trial, however, cracks appeared in the case against them.
A U.S. military police patrol that arrived on the scene about 30 minutes after the incident found no dead or wounded Afghans. And Navy investigators didn't reach the scene until two months later, spending only about an hour there.

One of the most damning witnesses was Haji Liwani Qumandan, who said he was driving a blue Toyota SUV — which the Marines said carried armed men who fired at them. Qumandan testified that everyone in the vehicle was an unarmed civilian.

He said "thousands of bullets" fired by Marines killed his father and 12-year-old nephew, and wounded him in the back. Qumandan received a condolence payment after his name did not turn up on U.S. intelligence terrorist lists.

But in a classified court session closed to the media, a U.S. intelligence report described Qumandan as an active Taliban participant, according to Morgan, the jury member.
"He was bad news — we were dealing with the devil," said Morgan, who had served as a Marine intelligence officer.

After 17 days of testimony, the three-officer jury cleared Galvin and others. The court noted "unsubstantiated allegations" by military commanders about civilian casualties. It cited the undue influence of a "high level of command, media and governmental attention focused" on the incident.

Testimony by the Marines was "consistent, truthful and credible," the court concluded. Afghans, on the other hand, were known to "fabricate statements and evidence" in hopes of receiving U.S. condolence payments, the court said.

"The duplicity by the command — by the senior leadership in our military — well, they showed some very weak leadership," Morgan said.

Nicholson, now a three-star general, said through a spokesman that his "thoughts have not changed" since his testimony at the 2008 court hearing.

The panel's finding were forwarded to a Marine three-star general, who issued a finding in 2008 that the convoy responded properly to the car bomb and ambush. A short statement was released late on the Friday before Memorial Day weekend in 2008.

Still, the ruling did not restore the unit's reputation. Galvin says the Marine Corps should have done more to emphasize that his men had not fired wildly and killed civilians — and to correct earlier statements by military commanders to that effect. A Marine Corps spokesman declined to comment.

"We were ambushed and we fought on the battlefield with honor," Galvin said. "There were allegations of homicide and we're living with that to this day. This haunts us."

Galvin says he's not asking for damages or reinstatement, only redemption. "I want them to acknowledge that we were falsely accused," he said.

Jones, whose district includes Camp Lejeune, said Fox Company had been the victim of "a witch hunt" in which "senior leaders of our Armed Forces publicly denounced Major Galvin and his Marines before an investigation of the matter was made."

Jones demanded that the Marines' service records be corrected "to remove the stains of being wrongly accused of homicide."

http://www.military1.com/marines/article/3404014-marine-unit-fights-for-lost-reputation-in-afghanistan
Posted in these groups:

MSgt Tim Parkhurst
Posted 6 y ago
I personally know several members of that unit, including Major Fred Galvin. I can confidently say that Maj Galvin was, and is, a man of impeccable integrity and a true military professional. If he says things went a certain way, then that's how it happened. The politically driven witch hunt that followed that unit's actions is indicative of the undue political pressure applied to our leaders at the tactical level. It also highlights the way some senior leaders have sold out to the politicos who thrive on questioning every move made by every serviceman looking down the barrel of a rifle. It's an epidemic, and it needs to be eradicated like the cancer it is. It's failure by our elected officials that results in the "need" to apply military force. When they fail at diplomacy, our Marines are at the tip of the spear to go clean up the mess. How dare those same politicos then crucify our combat leaders on the alter of worldwide "perception" of what took place in the heat of battle? It's the height of hypocracy! Those "men" who sit at the feet of lawyers to second guess the men in the arena aren't fit to lead. I can only pray to God that we might someday have men like Fred Galvin wearing generals stars or sitting in the halls of Congress.
(5)
Comment
(0)

LCpl Mark Knight
Posted 6 y ago
See afghans lie and want contributions all the time. I saw it all the time while I was on tour there
(2)
Comment
(0)

Sgt Frank Rinchich
Posted >1 y ago
The only thing a true Marine can say is to repeat the words of U.S. Rep. Walter B. Jones of N.C. The president and Commandant should make a public apology and read off each and every Marines name they are apologizing to. It's really sad that high echelon sacrifices the worrier in harms way for their political gain , and that is oblivious here.
(1)
Comment
(0)
Show More Comments
Read This Next
RallyPoint Home