Men do you feel pressured to support women in combat roles? 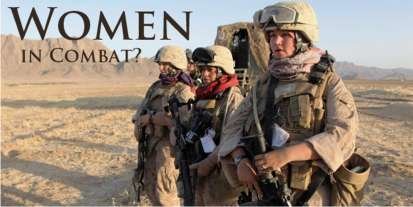 I see a lot of men being supportive about women in combat positions. I'm wondering if this is real support or just paying tribute to the current politically correct band wagon.
Posted in these groups:

Sgt Aaron Kennedy, MS
Posted 6 y ago
I follow the data, and my opinion has evolved according to the release of the data. As new data is released, my opinion will continue to evolve.

As current, the most comprehensive data set is the USMC integration training from last year. The take away from that was that "as a class, while in ground based roles (as opposed to mounted), females suffered SIGNIFICANTLY higher injury rates, while simultaneously losing efficiency in combat metrics." This is counter to the Marine Corps philosophy of "Mission Accomplishment, Troop Welfare." That said, why would we do it?

This is not to say women shouldn't be in combat. Just that they shouldn't be in those specific roles, until we can overcome those issues. All other roles had already opened up, and the USMC was already working towards that goal anyways.
(11)
Comment
(0)
show previous comments

LTC (Join to see)
6 y
Sgt Aaron Kennedy, MS - but no one is suggesting that women as a class be put into the infantry. It is that selected members of that class can. I've seen the full study, but didn't see the part that said the women had higher PT scores than the men on the mens PT test scale. There are a lot of issues with the methodology of that study that have been explained in several articles, so I won't try and cover them here. But there is a difference between denying an individual an opportunity based on class averages vs an insurance companies that have to insure the entire class. No one is talking about that. For example, the average weight of the females was 142 while for the men it was 178. Could that have any bearing on an injury like stress fractures while carrying heavy loads? Of course. But does that mean a 170 lbs well trained and physically fit woman should be denied the opportunity to serve in an infantry unit? I don't think so.
(4)
Reply
(0)

Sgt Aaron Kennedy, MS
6 y
LTC (Join to see) - We can't use a "men's PT" test as a standard. There's a "normalized PT score" for a reason. Physiological differences between the genders. Women "as a class" are slower than men (by about 1min/mile) and have SIGNIFICANTLY less upper body strength. On top of that, they "medically required" to have 10% more BF% than men just for survival purposes, which will results in less muscle mass. If we look at the height/weight charts, for a woman to even get to the 170 range, she is going to have to be 5'10 (males only have to be 5'6"). We're not talking apples to apples here. These are different machines, and have to be looked at as such.

If you take a 135lb Marine to the field, you risk breaking them (I know, I was a 135lb Marine at a grunt BN). As that risk increases, you add policies to reduce said risk. Sometimes those "blanket policies" aren't fair.

The reward for opening up Infantry or 25 BN's in the Marines to 7% women population, based on an estimated .5% total structure just doesn't make sense. It's not mathematically viable. "The Juice ain't worth the squeeze." Too many injuries, too much loss in combat capability, too little gain in recruitment.
(1)
Reply
(0)

MAJ Bill Darling
6 y
LTC (Join to see) - I think the unintended consequence of these policies most definitely suggests that women can be forced into such infantry roles. After all, if a woman *can* serve why should women be protected from the draft? So there are Congressmen who are looking into updating the Selective Service System to include women. After all, infantry is not a completely voluntary force, especially if the draft were needed again.
(2)
Reply
(0)

SSG Audwin Scott
Posted 6 y ago
Not at all CPT C, I respect and support women in combat. If a woman wants to be in a combat role go for it!!
(8)
Comment
(0)

LTC Stephen F.
Edited 6 y ago
Posted 6 y ago
No I don't CPT (Join to see). I was part of the first USMAPS class 1975-1976 and the first USMA class 1976-1980 which included women as cadet candidates in USMAPS and as cadets at USMA.
I served with women in many assignments throughout my career which included periods when certain leaders wanted to ensure that diversity was included in promotion rates - distribution rates by gender and race were both being looked at.
I hope that the leadership exercises wisdom and does not make rash judgments.
(8)
Comment
(0)
Show More Comments
Read This Next
RallyPoint Home