Should Army and Marines (or components of) consolidate? 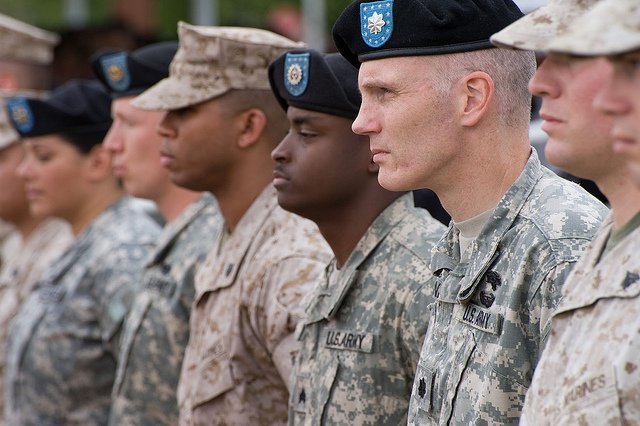 Think objectively. Traditions, camaraderie aside. Both are somewhat similarly more combat-oriented than USN or USAF. Answer practically without putting down either one of them.

PS: Yes, some are taunting about USN and USAF consolidation or Air Force return to Army Air Corps. My take on that if it's practical, lessen bureaucracy, and make for a smoother communications pipeline amongst the DoD components, why not? Again, camaraderie and traditions aside for a min.
Posted in these groups:

SSgt Stephanie Luck
Posted >1 y ago
NO! I mean no offense to the Army but we earned our eagle globe and anchor and if you asked any Marine that question, it's almost an insult. I have nothing against the army. Each branch serves a purpose but being a Marine is a title we carry with pride. It's sacred to us. There will always be a need for the army and there will always be a need for Marines. I respect other branches but we are "the few, the proud, the Marines". To just put us in with the Army isn't how we trained and not what we signed up for. SEMPER FI
(819)
Comment
(7)
show previous comments

CPT Lawrence Cable
8 mo
Sgt Frank Rinchich - Not supporting merger, but smaller and faster than the 75th Rangers? Or most of the units in the 18th Airborne Corp (82nd, 101st, 3rdID and the 10th Mountain)? You can put the 75th and 82nd on the Ground as fast as you could sail an MEU into an Area. Slightly different missions. MEU's are often used as a show of force by sitting a couple of LHD's of the coast somewhere with a Carrier task force. They send the 75th and 82nd in after things are already FUBAR.
(2)
Reply
(0)

MAJ Ken Landgren
7 mo
The Marines rarely mention army divisions in the Pacific in WWII. To think one branch is better than the other should read more military history. If my army tank platoon wipes out an enemy company of tanks, are the marines still better than me? It's good to feel special but to denigrate other branches when we all bleed red is unwarranted and distasteful.
(2)
Reply
(0)

SGM (Join to see)
5 d
SSgt Stephanie Luck Not a higher standard, a different standard. It's all perspective.
(0)
Reply
(0)

LTC Paul Labrador
Posted >1 y ago
After reading the responses, I'm seeing a lot of the emotional response vs. an objective, analytical response. To some extent, that doesn't surprise me. There is not branch in our military that carries more myth and mystique than the Marine Corps. And Marines themselves are the first to buy into and push the mystique (again, not a big deal. They seemed to have learned early that PR is important. Something the Army as a whole is not as good at). However, to really answer this question we DO need to look at it analytically.

Currently Marines are structured to be medium-weight, combined arms expeditionary force that has been optimized for seaborne deployment. Expeditionary warfare is not unique to the Marines. The Army has it's own expeditionary units (82nd, 101st, Rangers) that can get to the fight faster than the Marines can. The big difference is that the Marines come with more firepower and a more robust sustainment ability (30 days vs 3 days). Also, Marines have interoperability with the Navy that is in their DNA. Their officers are trained from day 1 side-by-side with naval officers so that they are intimately familiar with naval operations. Amphibious warfare is also a stated raison d'etre by the Marines. They have essentially taken that highly specialized role as their own and become the SME's for it.

On the other side of the coin, however, beyond force structure allowing for quicker deployment and the highly specialized amphibious role, everything else the Marines bring to the strategic table is a duplication of Army capability, and not necessarily a more capable duplication. While Marines have better strategic mobility than comparable Army units, they give up firepower and protection to do it. And once they are on the ground, they don't fight much differently than a comparable Army unit. So again, this begs the question, is there much the Marines bring that the Army can't do? The cold, analytic answer is no. The Army is capable of taking over the Marine mission. Now, this would not be without some hiccups. First the, the Army would need to develop a force structure that would allow them to conduct the Marine mission. The closest we have to a "Marine-style" MAGTF is the Strykers, but even that is not a complete 1:1 mirror. We would also have to do some training changes to accomodate the amphibious mission and requirements. Finally, there would need to be more integration with the Navy at the operational level. This will require Army officers to have more and sustained exposure to naval culture and doctrine to create the level of interoperability that the Marines and Navy currently have. In short, consolidaiton is doable, but not without some significant humps to to overcome...and that is not even addressing the emotional reaction that will come about with any plans to dissolve the Corps and roll it under the Army.
(434)
Comment
(2)
show previous comments

Maj (Join to see)
3 mo
MAJ Ken Landgren - We haven't had a declared war since WWII. Doesn't seem to be slowing down our pace of military deployments.
(0)
Reply
(0)

MAJ Ken Landgren
3 mo
The numbers of deployments might not change but the size of the deployments are smaller.Maj (Join to see)
(0)
Reply
(0)

Sgt (Join to see)
6 d
I was the first marine in my family. Everyone else was army all the way back to the civil war. So I say this with great respect for the army with all the spectacular soldiers in uniform. HELL NO.
(0)
Reply
(0)

MAJ Ken Landgren
7 mo
PO2 Anthony Lewis - A lot of battles were not fought in open land in Europe. Sometimes it was mountainous, in hedgerows, and deep forests.
(0)
Reply
(0)

CSM David Brock
6 mo
NO they should not be combind. The Marines had to change the way they do there job or be disbanded. That 90 days on the beach after landing was not cost effective. They have a real world mission now. They need to be forward deploy closer to the war zones for longer time periods. Going overseas by ship is to slow. Maybe we could used them for border patrol duty.
(0)
Reply
(0)

PO1 RIchard Petty
6 d
CSM David Brock - Are you saying that the Marines are only good be at border patrol? Because you be surprised how fast a ship can get to a place and start combat operations and sit off the coast for an infinite time to do combat missions. They can also jump on C-130s and be anywhere in a moments notice and they are called Quick Response Teams, just like what happened in Iraq when the they started to attack the embassy.
(0)
Reply
(0)

SSG (Join to see)
21 h
I read that also but under it was to make sure the beach was secured.
(0)
Reply
(0)
Show More Comments
Read This Next
RallyPoint Home