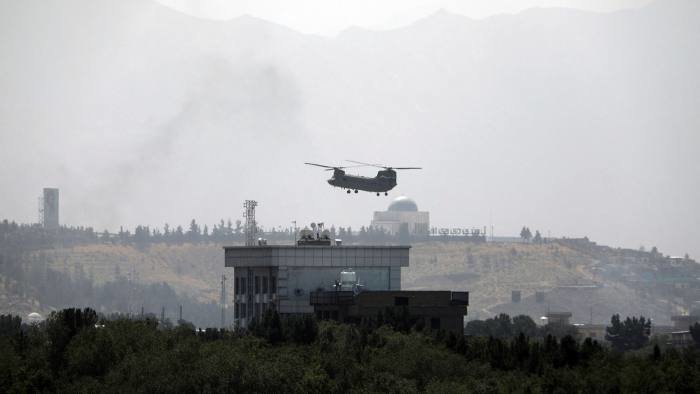 I can't say I'm surprised that this is all happening. Right now I'm just sad and frustrated.
Posted in these groups:

Capt Brandon Charters
Posted >1 y ago
It's been a heavy day for many of us. With all the negativity in the news, I couldn't be more proud of my fellow veterans who answered the call when we needed you the most. Regardless of the final outcome, your service mattered and I'm proud to call you my brothers and sisters.
(253)
Comment
(0)
show previous comments

SSG Robert Velasco
>1 y
Yes its wonderful, but how do you feel about unqualified personnel attempting to plan a return to Afghanistan without Pentagon approval ,on an ill fated rescue mission for the fast dissolving numbers of Americans?
(2)
Reply
(0)

SPC Edward Drain
>1 y
Kristen Cook - We are NOT complaining about the war fighters or the Nation-builders. We ARE complaining about the lack of any kind of cohesive plan for US citizens and Afghan allies, alike. And the way our military works, enlisted ranks are only required to serve the length of their contracts. No one is OBLIGATED to re-up every time, That is an individual's RIGHT.
(2)
Reply
(0)

Kristen Cook
>1 y
SPC Edward Drain I'm not sure why you are addressing me when reading your post the only thing we disagree with is the US citizen on the ground have known for over a year, why did they wait until the last moment? I seriously hate what's happening over there and it breaks my heart thinking of the 13 troops that made the ultimate sacrifice right before going home, I do take comfort in knowing (hoping) they died doing what they meant to do and that's to "serve for the greater good rather than self". It also breaks my heart for those who also gave with their lives and who are still fighting this war every single day and it makes me sick to my stomach another 22 veteran lives will be lost tomorrow do to suicide!!! Enough is enough our troops needed to come home, our families need them, they need to not be forgotten for another 20 years. People are so up in arms over the equipment left behind well that's what we do and have at least since Vietnam, no ones been complaining our troops have been fighting a war that is not called a war so don't shoot unless shot at (that's gotta mess with one's head waiting for someone to pull trigger) but because people are so divided and want something to do while collecting unemployment they "act" like they really even care! The caring, yellow ribbons, apple pie clapping at airports when a service member in uniform gets off all stopped about a year after 9/11 and that's being generous. Hell lucky to get a 10% off on a cup of coffee. Unless you are married to or a have afamily member in the United States Military most don't bother having a clue what they go through even not in combat. Indeed no one forced them into joining thie military or re enlisting when they could seperate but that's what they do, that's what run through their blood and that's why no one is forced to and why we sleep safe in our beds under one nation safely! Because they are doing what they were called to do and that's why it sucks we don't take care of them or even acknowledge them! This same thing happend in Iraq minus the people needing/wanting out, we left tons of equipment and set Isis up just like it appears we left the Taliban and no one was up in arms over it not even in 2014 when we had to send more troops back to fight of Isis, who we armed! The radical Islams have been in a Holy War from the beginning of time and will b till the end of time, Isis, Alkada, Isis are all the same and enter mingle when it suits them! Is one more life of another troop worth it? Not even for a second!
(0)
Reply
(0)

SFC Michael Hasbun
Posted >1 y ago
Look, what happened in Afghanistan was always going to be what happened. Had we been there one year, ten, twenty or a hundred, we still would have arrived right here..
Unfortunately it was a foregone conclusion. At no point was the Afghan National Army ever going to be what we wanted it to be.
Our military is a product of our values, our population, our history, our budget, our executive priorities etc...
The ANA can only be what it's going to be based on it's own organic values, desires, population, objectives, etc...
If you're angry that Trump made the agreement with the Taliban, or that Biden adhered to that agreement, don't be. It doesn't affect the inevitable outcome.
This is not our issue. This is their issue.
I know we're used to throwing enough bombs at a problem to get what we want, but despite all the bald eagles, apple pie and flag waving, sometimes we don't get what we want. That's life.
(219)
Comment
(3)
show previous comments

SPC Edward Drain
>1 y
SSG (Join to see) - ok, 1) We've all experienced people whose degree does not line up with their supposed expertise. I *think* SSG Velasco would prefer it if instead of listing a degree as proof you know what you are talking about, you gave references to the things you are talking about, Didn't they teach you that in school? Stop talking as IF you have authority, and start proving you ARE an authority in the subject.
(0)
Reply
(0)

MAJ Karl Swenson
>1 y
SPC Eduard Romanov - Your kind of bias, racism, bigotry, and sexism has no place anywhere! Why is it so hard to accept people for what and who they are? You state that SPC (Join to see) needs to "deploy at least once and see some blood on his face." What the hell does that have to do with anything?? It sure sounds like the words of a REMF wannabe to me. If you have -been in combat - sounds like a big if - and if you have depended on someone to have your 6, chances are good that someone may have been called one of the derogatory terms you mentioned. Oh my!! What would you say then?? How would you thank such a person for protecting your life?
Get off your ass and learn about people. You never know, your best friend might be a "faggot"....
(0)
Reply
(0)

SFC William Linnell
>1 y
Holy Balls!!! Y'all just went full tard mode. I had to stop reading as this just went to left field and people are pissy bc no one is throwing them any balls. STAY ON POINT!! Some opinions are most likely from careerist Soldiers who actually did the day to day training with the National Army. As well as the National Police and Border Police. It was one soul sucking mission in trying to train a 75% illiterate populace with the mind set of 8 year olds. Having to explain a task 4 different ways in order for them to understand.
For those that did work hand n hand with these three entities are close to being subject matter experts on the subject on how the ANA would and did collapse. Our government were damn fools in thinking otherwise. And all those thousands of civilians that wanted to escape claiming asylum. Well, suck it up buttercup. It's your country, pick up a rifle and eliminate the Taliban. But they won't. Why? Lazy? Cowards? It's up to them now to decide. Those working for the US and our allies there should've gotten priority along with American civilians working there. One can beat this like a dead horse with the same go around.

All that reinvention of Win the hearts and minds failed in Vietnam. Who was the dumbass that brought it back thinking they would put their name stamp on it? The Afghan Tribal Leader can read the PRT team like a fat kid reads a candy bar. In 15 short minutes he know what he can get from Mr GI Joe and the deep pockets of Uncle Sam. They had no fear of us. BUT they did fear the Taliban. Why? Because they would come in, ask a question, they didn't like it, they would grab someone and say right answer or we shoot him, her didn't matter. Down right to the soul fear. That's why we couldn't find them in the villages or hiding near by. Or find their weapons cache' and so on. And we built it for them. New schools. School supplies, desks...you name it. New wells. Fix buildings. Taliban didn't. Nor the Russians.
Shoulda, coulda woulda.....doesn't change the outcome as it was inevitable.
(0)
Reply
(0)

SSG Robert Velasco
>1 y
SGM Mark Schermerhorn you're not alone in your assessment and it's not difficult to deny Pakistan was a silent enemy of America in conjunction with the Taliban and ISIS! Training grounds and recruitments were most likely in Pakistan!
(0)
Reply
(0)

SPC Joshua Pruitt
>1 y
We never left any other country after our involvement, we need to go back and I'll go first!!!
(0)
Reply
(0)

SPC Joshua Pruitt
>1 y
SFC William Linnell - The Same ones whom put a White Unit From Tennessee with a Black Unit from Alabama and expected no racism to be involved in the unit and then they put the kids in the unit in prison for trying to cope with it all, I hope that answers your question. No Offense, just speaking the truth.
(0)
Reply
(0)

Jackson Elliott
1 y
Hey, I'm a reporter writing about the retreat from Afghanistan and its impact on veterans. Would you be able to talk with me? My email is [login to see]
(0)
Reply
(0)
Show More Comments
Read This Next
RallyPoint Home