What is “Stolen Valor”? 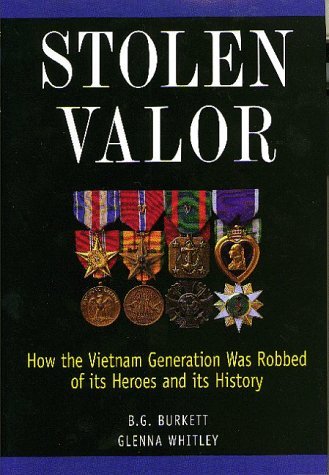 Lately, I’ve found myself explaining to folks the difference between the Stolen Valor Act and the thing that we call “stolen valor”. The phrase actually comes from BG “Jug” Burkett who wrote the book “Stolen Valor” which was published in the 90s and told the story about folks who had appropriated the valor of the Vietnam generation of warriors. In 2005, President Bush signed the Stolen Valor Act which made lying about one’s military experience a crime.

In 2012, the Supreme Court invalidated that federal law because, they said, it violated Americans’ freedom of speech. The following year, Congress passed, and the President signed a new law, called the Stolen Valor Act of 2013 (Pub.L. 113–12; H.R. 258) that made lying about your military experience illegal if you told that lie for some sort of “tangible benefit” if your lies concern certain badges and medals. The list of medals and badges reads like this; a Medal of Honor (Army, Navy, Air Force), a Distinguished Service Cross, a Navy Cross, an Air Force Cross, a Silver Star, a Purple Heart, a Combat Infantryman’s Badge, a Combat Action Badge, a Combat Medical Badge, a Combat Action Ribbon, a Combat Action Medal, or any replacement or duplicate medal for such medal as authorized by law. The Stolen Valor Act of 2013 modified Title 18 of the United States Code, Section 704.

Generally, we, in the Stolen Valor community, aren’t concerned with the federal law. TAH and our partners have very little influence with federal prosecutors who are usually reluctant to pursue Stolen Valor Act charges against a criminal. What we are concerned about is the truth.

The Supreme Court essentially gave us a warrant to hunt down these valor thieves and expose them to the public. Justice Kennedy wrote in US v. Alvarez that “Truth needs neither handcuffs nor a badge for its vindication.” That means that we don’t need the government regulations or law enforcement to expose liars to the light of truth.

We look at things that aren’t necessarily regulated by the US Code – things like the POW Medal, for example.

Many of the conversations I have on social media are with people who confuse the Stolen Valor Act with BG Burkett’s phrase. In our community, there doesn’t have to be a “tangible benefit” to be Stolen Valor. That’s for lawyers to parse. All we’re interested in is the truth. In US v. Alvarez, Justice Kennedy wrote;

The remedy for speech that is false is speech that is true. This is the ordinary course in a free society. The response to the unreasoned is the rational; to the uninformed, the enlightened; to the straight-out lie, the simple truth.

Society has the right and civic duty to engage in open, dynamic, rational discourse.

The court of public opinion doesn’t expect us to prove a “tangible benefit” for valor to be stolen. We’re only interested in preserving history and the valor of those who wrote those chapters of history in blood. The lie makes it stolen valor, not the intentions or motivations, legality or illegality. Most of the people who commit Stolen Valor are within their legal rights to do so – and so are we within our legal rights to expose them as common liars.

LTC Stephen F.
Posted >1 y ago
Thanks SGT (Join to see) for providing the background of Stolen Valor Act. I didn't realize it was not that long ago that it was signed and that President George W. Bush signed the the Stolen Valor Act in 2005. I am glad that after SCOTUS invalidated the act, Congress passes anew law that passed SCOTUS scrutiny.
Thank you for providing the details of what can be done to those who attempt to steal valor.
(5)
Comment
(0)

1stSgt Eugene Harless
>1 y
The problem with the new law is that it is vague on what a "tangible benefit" is. Unless someone falsifies documents to get something from the Government (VA Benefits, DMV discounts, Etc) they aren't prosecuted. Even then they aren't charged with Stolen Valor but with fraud, which has higher fines and longer sentences. Some states are enacting their own SV laws, which closely mirror the federal statute, and have a higher chance of enforcement. While I think it's unrealistic to think that dirtbags who throw on a surplus uniform and get a free meal at Applebees will ever do time I would like to see those who bilk charities out of hundreds of dollars in cash, hunting gear, trips etc get charged.
(4)
Reply
(0)