Who's going to be the 1st to hit 1 million Influence Points?

SSG (Join to see)
6.73K
71
44
4
4
0
Im sure most of know who the usual suspects are in the discussion threads and know that SSG Burns, Robert type one each and SSG Woods, V. Michelle one each lead the pack. SO......of the two who will hit a million first? Taking all bets....lol
Posted in these groups: 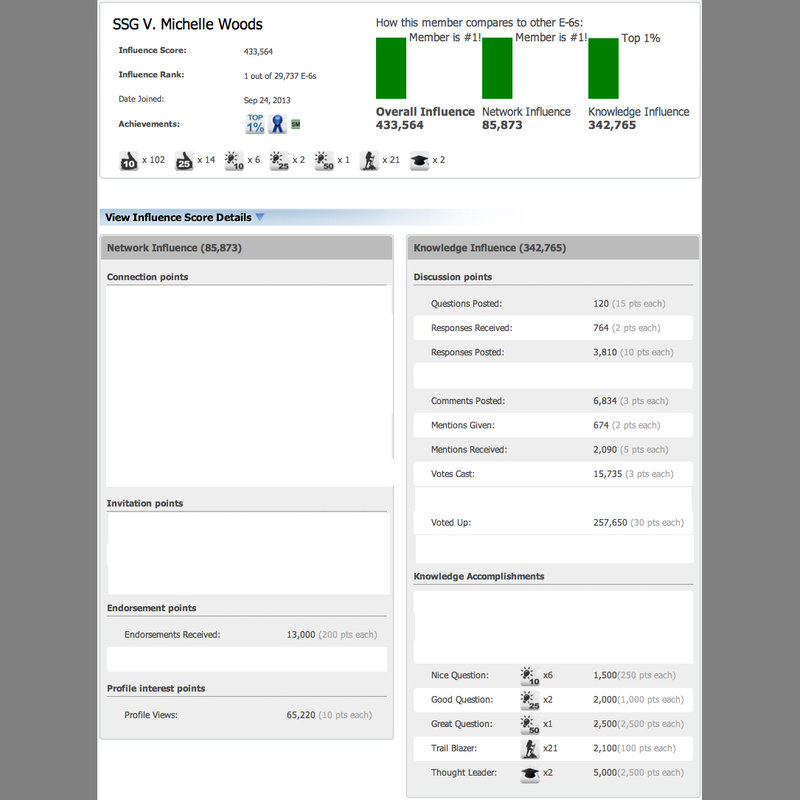 Just thinking out loud for a few minutes . . .

If you look at SSG V. Michelle Woods versus SSG Robert Burns points history . . . and their implications re past and future strategies . . .

SSG Woods substantially leads in her votes cast, comments posted, and mentions given resulting in a substantial lead in RP community endorsements and profile views.

However. if SSG Burns were to adopt some of SSG Woods overall strategy . . . then he may have half a chance of attracting a few more RP community endorsements and profile views.

Of course . . . I'm getting rather long in the tooth . . . a bit jaded . . . rather biased in my support for incredibly brilliant highly capable hard working young women . . . soooooo . . . I would invest my money in SSG V. Michelle Woods to totally crush the competition!!!

After all . . . it is hard for a gentle male tiger like SSG Robert Burns to change his stripes.

1LT (Join to see)
>1 y
LTC (Join to see). Obviously, you have thought this through very carefully. I am only speaking off the top of my head. Just an idea. Warmest Regards, Sandy

LTC (Join to see)
>1 y
1LT (Join to see) We have the benefit of so many great members who write in all the time offering suggestions, which makes our job quite a bit easier. We appreciate the feedback.
(3)
Reply
(0)

SFC (Join to see)
Edited >1 y ago
Posted >1 y ago
another question to ask is whether or not, RP has written the code to allow 7 digits for the Influence Points. If not, will their scores simply roll over to zero again like old cars and their odometers?
(5)
Comment
(0)

SFC (Join to see)
>1 y
SSG V. Michelle Woods I am sure that the powers that be have seen just how quickly your score has risen and already have the code written to allow for 8 or even 9 digits. :)
(0)
Reply
(0)

SCPO (Join to see)
Edited >1 y ago
Posted >1 y ago
I could not help this, so I apologize in advance as I snicker!

So now that SSG V. Michelle Woods has surpassed half a million influence point on RP, if any of the 2LT's on RP run into her do they have to salute her?
(4)
Comment
(0)
Show More Comments
Read This Next
RallyPoint Home